NOAA Fisheries is pleased to announce the selection of Dr. Lyle Britt to the position of Bering Sea Bottom Trawl Survey Group Supervisor for the Groundfish Assessment Program.

NOAA Fisheries is pleased to announce the selection of Dr. Lyle Britt to the position of Bering Sea Bottom Trawl Survey Group Supervisor for the Groundfish Assessment Program. This position is within the Resource Assessment and Conservation Engineering Division of NOAA Fisheries’ Alaska Fisheries Science Center in Seattle, Washington. 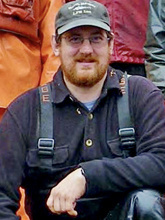 Britt replaces Dr. Bob Lauth who retired this year. Britt is a fisheries research biologist who has been working for the Alaska Fisheries Science Center for the past 23 years where he served as survey coordinator for the eastern Bering Sea shelf and northern Bering Sea bottom trawl surveys.  In this capacity, he oversaw survey staffing and logistics and served as a chief scientist on the vessels during survey operations.

He also has served as the special projects and collections manager for these surveys, working with other NOAA scientists and outside researchers on the scope and design of their scientific requests, which are added to the core mission of the surveys to maximize the utility and scientific impact of the bottom trawl surveys.

In addition to his survey responsibilities, Britt has been a leading researcher in the study of light and optics in the ocean and its role in determining the visual capability and behavior of marine organisms.

Last updated by Alaska Fisheries Science Center on May 11, 2021