A male California sea lion spotted lounging on the dock at Auke Bay over the weekend has gently been encouraged to haul out elsewhere. 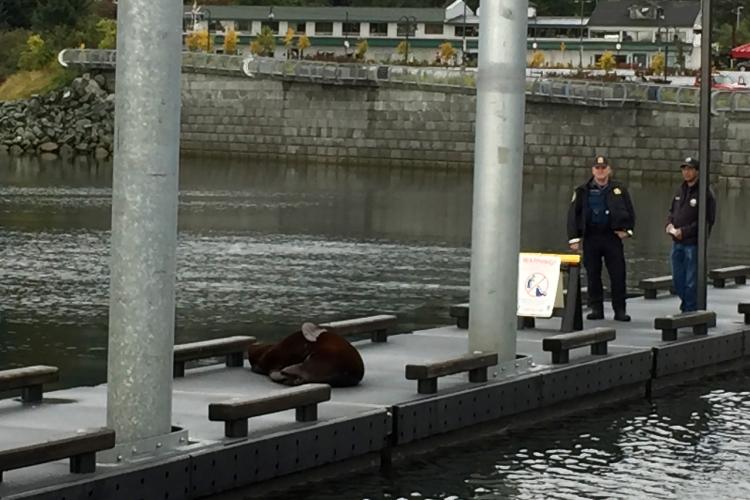 A male California sea lion spotted lounging on the dock at Auke Bay over the weekend has gently been encouraged to haul out elsewhere.

A marine mammal expert from NOAA Fisheries Alaska Regional Office and a NOAA Office of Law Enforcement officer teamed up with assistance from the Auke Bay Harbormaster early Monday to remove the sea lion from one of the most public seaside locations in Juneau, using a large piece of plywood to crowd the animal off the dock and into the water.

The sea lion was first reported hauled out on the dock about 10:30 a.m. Sunday, exhibiting lethargic behavior. Despite signs posted by NOAA law enforcement for people to stay away from the animal, several people approached it, some taking photos. Another person came by in a boat and attempted to feed the sea lion. At one point, the sea lion charged a person.

“Given the aggressive behavior by this 800-pound male sea lion, and the fact that there are an abundance of natural haul-out areas in Southeast Alaska, we decided it would be best to encourage this animal to move on,” said Sadie Wright, of NOAA Fisheries Protected Resources Division. She added that this appeared to be a healthy California sea lion, despite its initial sluggish behavior.

California sea lions have been sighted in Ketchikan, Sitka, and near Juneau at Point Bridget. This is the first time Wright recalls one hauled out at Auke Bay.

In light of human safety, NOAA Fisheries reminds the public to be extremely cautious near sea lions and other marine mammals, particularly in such cases where animals are hauled out on human structures. Animals may appear docile, but in fact can be very dangerous. Numerous instances have occurred, both in Alaska and in other regions, where sea lions have bitten people who have gotten too close.

Feeding marine mammals can create an escalating series of negative events that is bad for the animals and dangerous to people—habituating animals to see humans as a food source will lead to the marine version of a “garbage bear,” and ultimately put humans and wildlife in conflict.  In addition, when marine mammals spend time near docks or vessels, they are more likely to be attracted to fishermen’s’ catch, become entangled in gear or debris, or be exposed to accidental fuel spills.

“While viewing marine mammals, your actions should not cause a change in the behavior of the animals,” said Wright. “Offering food, discarding fish or fish waste, or any other food item is prohibited. Do not approach or touch the animals, as they can behave unpredictably and may transmit disease. Remember to keep pets and children away from these very quick animals.”