November 5 Update: Scientists agree that the probable cause of death was a severe acute entanglement. 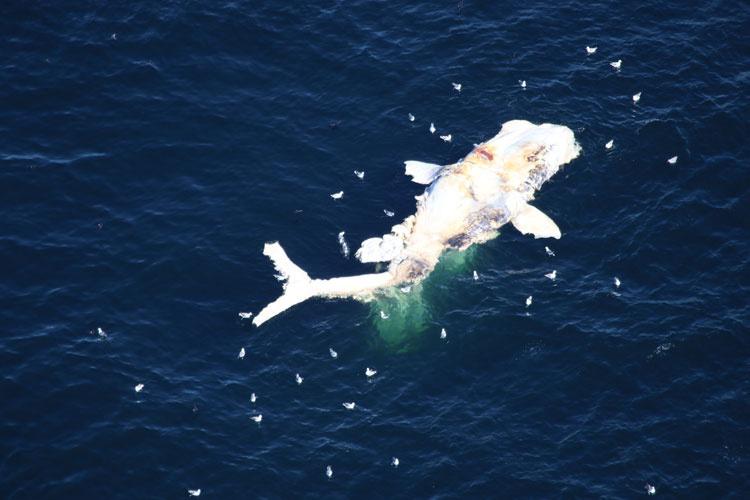 After reviewing the data collected from this whale, scientists agree that the probable cause of death was a severe acute entanglement. We will run a DNA test on the samples in hopes of identifying the individual whale and determining the sex by matching it to a known animal in the population.

The carcass was severely decomposed, suggesting the whale had been dead for anywhere from 1 to 4 weeks at the time it was examined. The whale had multiple wounds indicative of a wrapping line entanglement, including pronounced ligature impressions with related deep concave defects indicating severe constricting abrasions. Entanglement wounds were strongly suggestive of numerous transverse body wraps involving the thorax (chest) and flippers. No gear or lines were present on the animal when it was examined.

On Sunday, October 14, the NOAA vessel Henry B. Bigelow reported a sighting of a whale carcass floating about 100 miles east of Nantucket. After review of photographs by experts, the carcass has been confirmed as North Atlantic right whale. The whale was at least 35 feet long. This is the third known right whale mortality of 2018.

The carcass is severely decomposed, but photographs show multiple wounds indicative of human interaction. The initial examination revealed marks consistent with entanglement. However, at this stage is it too early to speculate on the cause of the death.

To gather additional information, NOAA scientists and members of the U.S. Coast Guard from Air Station Cape Cod flew a search pattern based on the last known locations, and were able to find the carcass on October 15. Additional photographs and samples were taken by the crew of the Bigelow to help identify and learn more about this animal.

In 2017, NOAA confirmed 17 North Atlantic right whale deaths--about 4 percent of their population--an alarming number for an endangered species with a population estimated at about 450 animals. In 2018, there have been two previously confirmed right whale mortalities, one in January, and one in August.

There are currently only about 100 females of breeding age in the population and more females seem to be dying than males. Births have also been declining in recent years, and no new calves were spotted in the calving grounds off Florida this year.

In August 2017, NOAA Fisheries declared the increase in right whale mortalities an "Unusual Mortality Event," which helps the agency direct additional scientific and financial resources to investigating, understanding, and reducing the mortalities in partnership with the Marine Mammal Stranding Network, Canada's Department of Fisheries and Oceans, and outside experts from the scientific research community. We are continuing to investigate these mortalities.

While the North Atlantic right whale population has increased since we began our recovery efforts more than two decades ago, this most recent decline and the large number of recent mortalities are a serious concern, and reminds us that we still have a long way to go to recover this species. Read more about our Atlantic Large Whale Take Reduction Plan, our Large Whale Disentanglement Program, and our Ship Strike Reduction program, which has helped reduce serious injuries and mortalities caused by vessel strikes. Find out about the actions we are currently taking to help right whales.

If you see or have any information about a stranded or entangled marine mammal, please report it to our stranding hotline 866-755-NOAA (6622) or to your local stranding response organization.