Estuaries are bodies of water where rivers meet the sea or a large lake. Rivers spread out and slow when they meet the sea, creating unique conditions that are not found elsewhere. They provide homes for diverse wildlife, including popular fish species. 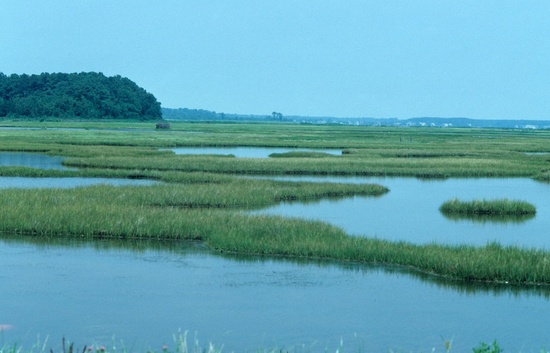 Estuaries provide a rich habitat for ocean and freshwater species for reproduction, feeding, and growing.

Estuaries: Nurseries of the Sea

Estuaries are often called the “nurseries of the sea” because so many marine animals reproduce and spend the early part of their lives there. As the tide rises and falls, water depth and chemistry change, creating a wide range of habitats. In some parts of estuaries, filtered by plants such as marsh and seagrasses, moving water becomes still, allowing mud and food particles to settle at the bottom. These variations create safe conditions, making estuaries ideal homes for plants and animals who feed, grow, or reproduce there. Estuaries are also a major stopover point for migratory animals such as waterfowl and salmon.

Our bays, harbors, sounds, and other coastal estuaries include brackish or freshwater marshes, mangroves, seagrass beds, and salt marshes. You might also find oyster reefs, kelp forests, and rocky or soft shorelines—each populated with creatures that thrive in that setting. With so much variation, it’s no wonder that estuaries are among the most productive ecosystems on Earth.

Most of the fish and shellfish eaten in the United States—including salmon, herring, crabs, and oysters—spend some or all of their lifetime in estuaries.

Besides being an ideal home for fish and wildlife, estuaries are also a good habitat for people. Twenty-two of the 32 largest cities in the world are located on estuaries. Notable U.S. estuaries include Chesapeake Bay, New York Harbor, San Francisco Bay, Boston Harbor, Tampa Bay, and Puget Sound.

Each estuary displays unique beauty and attracts many visitors, who come to hunt and fish, watch birds, take photographs, hike, canoe and kayak, and observe wildlife. Our coastal communities rely on beautiful and bountiful estuaries for recreation, jobs, tourism, shipping, and fishing.

Estuaries can filter out sediments and pollutants from rivers and streams before they flow into the ocean, providing cleaner water for humans and marine life. Healthy estuaries can absorb surges of water from storms, floods, and tides, protecting our homes and communities.

Estuaries are fragile ecosystems, vulnerable to both natural and man-made disturbances. The forces of nature—such as winds, tidal currents, waves, and temperature—can affect an estuary’s natural balance.

Human activities on land can harm estuary health in the water, often degrading living conditions for estuary residents and visitors. Stream and river banks can be damaged by erosion, outdated agricultural or forestry methods, or construction too close to the stream. Fish numbers then decline because their nesting and feeding areas are destroyed. Dams, invasive species, and poor boating and fishing habits cause even more damage.

Stormwater runoff from land carries a cocktail of contaminants from roads, vehicles, lawns, and construction and pours it into the nearest stream. Outdated farming methods can cause erosion, as well as nutrient and hazardous chemical pollution that ends up in the estuary. Urban waterways and large agricultural regions concentrate runoff and create toxic "hot spots" where nothing can live. For example, each year, the overload of agricultural chemicals causes a "dead zone" in the Gulf of Mexico spreading over 7,000 square miles, an area larger than the state of Connecticut.

In the past, it was considered good practice to fill wetlands, consequently shrinking the size of estuaries nationwide. Now that we know the value of estuary habitat, protecting and restoring it is a high priority.

Estuaries protect our health and well-being by improving air and water quality; absorbing floods, tides, and storms; nurturing commercially important fish; and providing recreational and travel opportunities. It is our responsibility to protect estuaries from the many challenges they face.

NOAA established the National Estuarine Research Reserves to protect these rich habitats and the species that live there. The reserves represent an important part of our commitment to coastal management. Under this partnership program, NOAA provides funding and guidance for the reserves, which are then managed by local stakeholders. The program currently protects more than 1.3 million acres of coastal wetland and helps states and territories prioritize conservation. Reserve staff work closely with local communities to keep coastal science current and relevant to them. By initiating the reserve process, we set conservation in motion, involving the people who will benefit most directly.

We restore habitat in estuaries across the country. While all estuaries share some qualities, each is a complex system with unique needs. The Estuary Restoration Act authorizes NOAA—working with partners in and out of government—to implement conservation projects. The act established an Estuary Habitat Restoration Council, which restores estuaries and their ecosystems and documents the resulting environmental and economic benefits.

Here are a few examples of our projects around the nation:

We Partner With State and Local Organizations

NOAA teams with other federal agencies, such as the U.S. Environmental Protection Agency and the U.S. Fish and Wildlife Service, and provides grants that inspire state and local organizations to take action. We provide the science and planning expertise to help partners design and implement projects that reverse declining estuaries and restore their productivity.

NOAA’s National Estuarine Research Reserves show how federal, state, and local organizations can partner successfully. By providing start-up funds and national guidance under the program, NOAA helps coastal states launch valuable conservation and research efforts, which are then sustained by a state agency or university. 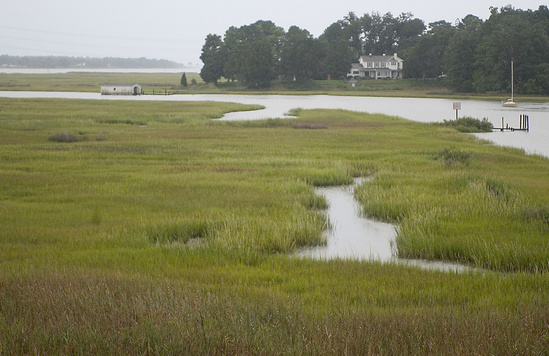 Coastal wetlands near the Chesapeake Bay.

Rivers and streams from six states flow into the Chesapeake Bay, America’s largest estuary. The Chesapeake watershed encompasses more than 64,000 square miles and is home to more than 18 million people. The day-to-day actions of people hundreds of miles from the bay affect its health and vitality.

Runoff from highways, cities, and farms flows into streams and rivers and into the Chesapeake Bay. Nutrient and chemical pollution accumulates. This creates dead zones, which result in lower yields of fish, crabs, and oysters. The people who work in traditional businesses like fishing are hit the hardest. Declining water quality in the bay also means challenges for recreational fishermen and tourism, a major component of the bay economy.

Last updated by Office of Habitat Conservation on 05/28/2021