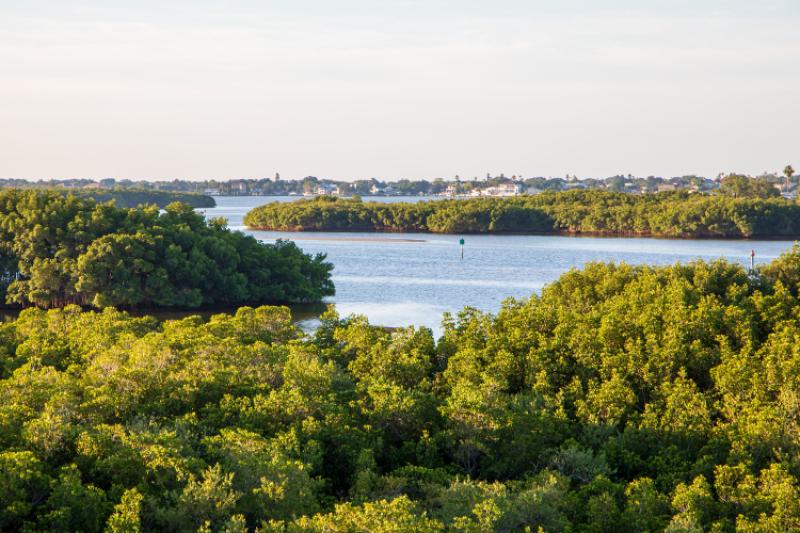 NOAA partner Restore America’s Estuaries has released a new report focused on the economic value of estuaries in the United States. In particular, the report highlights the economic benefits that estuaries and coastal habitats provide by protecting communities from the impacts of flooding and climate change.

Nearly 40 percent of Americans live near or on an estuary. Estuary regions are some of the most economically valuable in the country. They account for 47 percent of economic output and support more than 59 million jobs. Estuaries provide habitat for fish and wildlife, filter sediments and pollutants out of the water, and offer countless opportunities for recreation.

Estuaries also play an important role in protecting communities from the impacts of flooding, climate change, and sea level rise. Habitats like salt marshes and seagrass beds serve as natural infrastructure that can protect coastal communities from flooding and erosion. Marshes, mangroves, and seagrass beds can help capture and store greenhouse gases like carbon dioxide from the atmosphere, known as coastal blue carbon.

The report, The Economic Value of America’s Estuaries, explores the economic and demographic characteristics of estuary regions, including population, employment, and economic output. It expands on RAE’s 2008 report The Economic and Market Value of Coasts and Estuaries: What’s at Stake? That report examined the economic value of coasts and estuaries and the benefits of protecting and restoring these important habitats.

The new report also includes six case studies of estuaries across the nation:

The report was funded by the Office of Habitat Conservation, with technical support from its Restoration Center. Since 1991, the NOAA Restoration Center has provided funding and technical assistance to thousands of habitat restoration projects across the country. These projects support sustainable fisheries, help recover threatened and endangered species, and increase the resilience of coastal communities.

Last updated by Office of Habitat Conservation on November 02, 2021