Additionally, since 2017, 10 live free-swimming non-stranded whales have been documented with serious injuries from entanglements or vessel strikes.  The Marine Mammal Protection Act (MMPA) requires NOAA’s National Marine Fisheries Service (NMFS) to distinguish between injuries to marine mammals that are serious and those that are non-serious (e.g., MMPA Sections 101(a)(2)(4) and(5); 101(d); 108(a)(2); 117; 118; 120 (j)(2)). MMPA Sections 117 and 118 specifically direct NMFS to consider the human-caused mortality and serious injury to marine mammals for stock assessments and management of fisheries interactions. Serious injury determination is a detailed assessment process that uses data, such as body condition and parameters of the human-caused injury, collected from living whales to determine an individual whale’s prognosis for survival. A serious injury designation indicates a whale is likely to die from those injuries (although it was alive at its last sighting). More recent serious injury determinations (e.g., 2019 & 2020) are preliminary and subject to change as we receive additional information. Therefore, the preliminary cumulative total number of animals in the North Atlantic right whale UME has been updated to 41 individuals to include both the confirmed mortalities (dead stranded or floaters) (n=31) and seriously injured free-swimming whales (n=10) to better reflect the confirmed number of whales likely removed from the population during the UME and more accurately reflect the population impacts.

Thus, given there are only approximately 400 individual North Atlantic right whales remaining, these 41 individuals in the UME represent approximately 10% of the population, which is a significant impact on such a critically endangered species. Note: Graphs and/or tables represent confirmed mortalities and injuries reported in each country and does not always reflect the location of the injury or death of the animal. Carcasses may drift across national boundaries; therefore, a carcass may be sighted or reported in one country even though the mortality occurred elsewhere. Species or stocks that migrate across national boundaries often carry their illnesses, injuries, or exposures to toxins with them. For mortality and serious injury determinations in these species, transboundary collaboration is critical in determining the causes of injury, illness, and mortality for each animal. 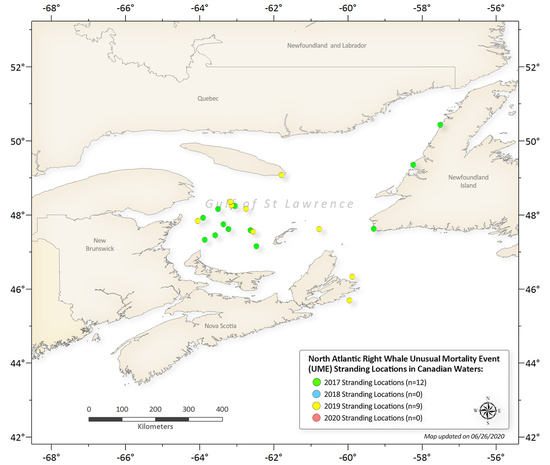 Map of NARW mortalities in Canada 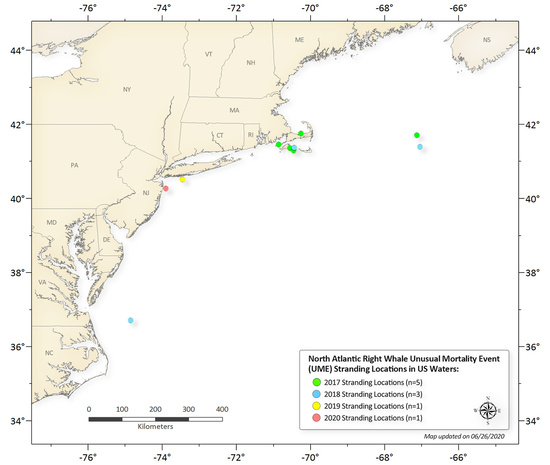 Map of NARW mortalities in the United States

Full necropsy examinations have been conducted on 20 of the 31 dead whales and final results from some examinations are pending. Necropsy results can be found online from seven of the Canadian whales from 2017 and from five of the whales from 2019. Photos and other available documentation for the live whales were reviewed by the NMFS Northeast Fisheries Science Center as part of the serious injury determination process and those listed above were designated as seriously injured.

As part of the UME investigation process, NOAA assembled an independent team of scientists to coordinate with the Working Group on Marine Mammal Unusual Mortality Events to review and interpret the data collected, guide sampling of stranded whales, evaluate sighting effort, review logistical considerations, and determine the next steps for the investigation. We continue to investigate these mortalities, but preliminary findings support “human interactions” as the primary category of the cause of death for the majority of the dead stranded whales, specifically vessel strikes or rope entanglements.  Additionally, 10 live whales have been documented as seriously injured either by vessel strikes or entanglements during the time frame of the current UME (2017-2020). A dead right whale floating at the surface of the ocean.

The most important step that the public can take to assist investigators is to immediately report any sightings of injured or stranded whales (dead or alive). In the United States, make a report by calling the Greater Atlantic Marine Mammal Stranding Hotline at (866) 755-6622 or the Southeast Marine Mammal Stranding Hotline at (877) 433-8299.  In Canada, call the Marine Animal Response Society at 1-866-567-6277 or the Quebec Marine Mammal Emergency Response Network at 1-877-722-5346. You can also contact the U.S. and Canadian Coast Guards on VHF Channel 16. Do not approach injured or dead animals.