Learn more about the valuation studies, cost-benefit analyses, and other protected species economics research we do at NOAA Fisheries. 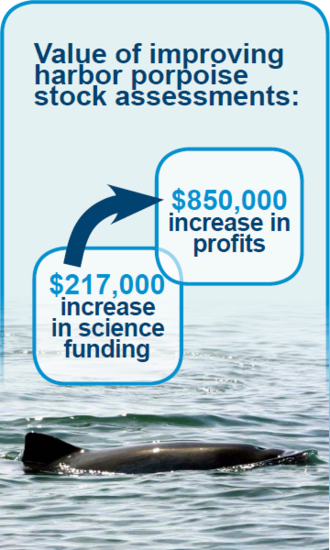 An area we are currently focused on is conducting protected species valuation studies. These studies enable us to assess the national benefits derived from threatened and endangered marine species. Economic values for protected species can then be used to assess the benefits obtained from conservation and recovery efforts. They also provide a useful benchmark for valuing NOAA’s protected species research and recovery efforts. Economists at NOAA Fisheries have estimated the value of recovering and down-listing 16 different marine species currently listed under the Endangered Species Act including whales, seals, sea turtles, fish, invertebrates, and plants.

Protecting a species through laws and policies implies that society considers these species to be valuable. Economics can be used to assess the value (in dollar terms) that people have for preserving a species for future generations, regardless of whether they ever view the species. These methods are known as non-market valuation.

Economists at NOAA Fisheries recently measured the value of recovering eight marine species that are listed as threatened or endangered under the Endangered Species Act. The results show that society places a value of $13 billion on recovering just three of them: leatherback sea turtle, North Pacific right whale, and North Atlantic right whale. This suggests that the benefits from recovering these species far outweigh the costs of current conservation measures aimed at reducing their risk of extinction. The results also justify increased science funding to preserve these species.

Because the risk of being wrong about a species could result in its extinction, protected species management must be risk-averse. Thus, scientific information with a high degree of uncertainty results in stricter management measures.

All survey information includes some amount of statistical error and uncertainty. We know that our economic value estimate will be more precise if we collect more data. More precise estimates then increase our confidence in setting regulations that balance fishing activity and species protection. For example, one of our recent studies found that a modest annual increase of $217,000 for data collection could improve the precision of the Northwest Atlantic harbor porpoise stock assessment such that profits to commercial fishermen would increase by $850,000 per year.

Costs and Benefits of Regulations

NOAA Fisheries estimates that Americans are willing to pay $4.38 billion annually for the recovery of the endangered North Atlantic right whale. This species generated an estimated $2.3 billion in sales in the whale watching industry and across the broader economy in 2008. In comparison, conservation recovery plans for this species placed restrictions on the fishing and shipping industry at an annual cost of $30.2 million.

Successful recovery of endangered species may require a multi-pronged approach that includes both reducing human-induced mortality and increasing survival rates of the species. For example, our economists have found that it is relatively inexpensive to increase the nesting beach hatchling survival of Pacific leatherback sea turtles. The table below compares the cost of reducing fishery interactions to the cost of increasing nesting beach survival rates for one adult equivalent sea turtle in the hatchling stage.

To more effectively promote recovery, however, a complete strategy would focus on increasing survival throughout all life stages of a species. In the long run, full recovery of threatened and endangered species will result in less restrictive regulations on fisheries.