Exempted fisheries allow vessels to fish for specific species without being subject to certain northeast (NE) multispecies regulations, including days-at-sea (DAS), provided the bycatch of regulated species is minimal. This is an exemption area in Southern New England (SNE) designed for vessels in the monkfish fishery using trawl gear, but some other species can be possessed or landed incidentally as well. 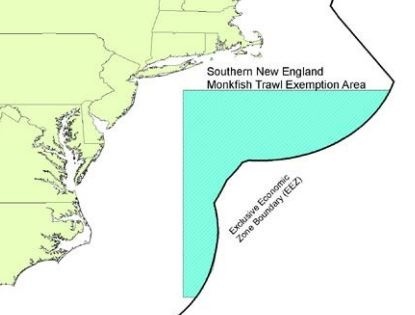 The SNE Monkfish Trawl Fishery Exemption Area is defined as the area bounded on the north by a line extending eastward along 40°10' N. lat., and bounded on the west by the eastern boundary of the Mid-Atlantic Regulated Mesh Area at 72°30′ W long.

Vessels fishing under this exemption are restricted to a minimum mesh size of 10-inch square or 12-inch diamond mesh applied throughout the codend for at least 45 continuous meshes forward of the terminus of the net. All nets with a mesh size smaller than this minimum mesh size must be properly stowed. Since vessels are not using NE multispecies DAS, all nets must also be stowed when transiting to and from the SNE Monkfish Trawl Exemption Area.

Vessels fishing under this exemption may not fish for, possess, or land any species of fish other than the following:

1 Skates may only be landed under this exemption if at least one of the following conditions are met:

2Incidental species allowed for retention when fishing for the exempted species above include: Conger eels; sea robins; black sea bass; red hake; tautog (blackfish); blowfish; cunner; John Dory; mullet; bluefish; tilefish; longhorn sculpin; fourspot flounder; alewife; hickory shad; American shad; blueback herring; sea raven; Atlantic croaker; spot; swordfish; and American lobster – up to 10%, by weight, of all other species on board up to 100 lobsters per day for trips of 24 hours or less; or 200 lobsters for trips longer than 24 hours, whichever is less.

Note: Unless fishing exclusively in state waters, to land and possess monkfish, vessels are required to obtain a federal monkfish permit and adhere to any applicable monkfish regulations.