Use the following resources to increase your understanding of the sturgeon, its habitat, forecasted future and what you can do to help them recover.

The sturgeon family is the most primitive of all bony fish, dating back to the Cretaceous period more than 120 million years ago. It is believed that the ancestors of sturgeon lived with the dinosaurs. This makes the sturgeon that you see today almost like living fossils!

Atlantic and shortnose sturgeons are anadromous fish, which means that they spend part of their life cycle in salt water and part in freshwater. They spend most of their time in coastal ocean waters, but migrate and travel through estuaries to rivers and freshwater for spawning. They are slow growing and late maturing fish. Shortnose sturgeon have been known to reach lengths of up to five feet long and weigh up to 50 pounds. Atlantic sturgeon have been recorded to reach lengths of 14 feet long, weighing almost 800 pounds! The oldest Atlantic and shortnose sturgeons that were recorded were estimated to be around 60 years old. Sturgeon are late maturing, some not reaching adulthood until they are 20 years old.

Sturgeon have five rows of bony scutes along the length of their body. Scutes are a modified ganoid scale. Ganoid scales are diamond shaped and found on primitive bony fish like sturgeon. 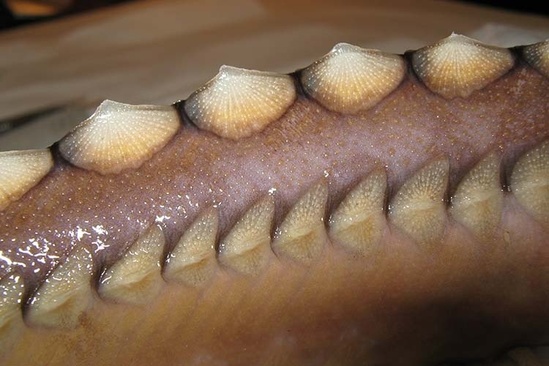 They can help serve as protection for the fish like armor, and also make sturgeon distinct from other fish.

Atlantic and shortnose sturgeons are benthic or bottom feeders which means that they feed and forage on creatures on the bottom of the rivers, estuaries and coastal waters. They feed primarily on polychaetes (worms), mollusks, crustaceans, and insect larvae. Their mouths are located on the underside of their body making them ideal benthic feeders. Between the mouth and tip of their snout, sturgeon have four barbels. These barbels are sensors which they use to locate food.

Sturgeon mouths are protrusible which means that it can be thrust out toward food on the ocean floor. They suck up food off the floor like a vacuum, and after swallowing it whole, they spit out any pebbles, sand and gravel that were also vacuumed up. Sturgeon do not have teeth! When they swallow their food whole, it goes into their muscular stomach which is strong enough to crush and break up food for digestion.

How Are Sturgeons Built? 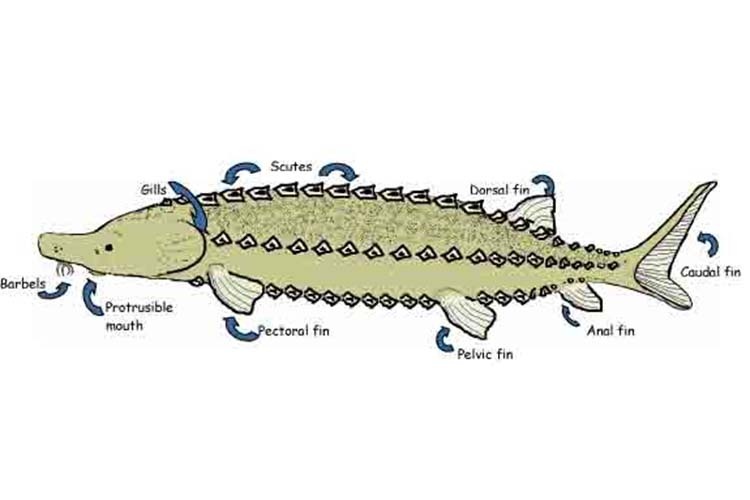 Sturgeon have five rows of bony scutes along the length of their body. Scutes are a modified scale. They can help serve as protection for the fish like armor and make sturgeon distinct from other fish.

Sturgeon do not have teeth! They suck up food like a vacuum with their protrusible mouth. After swallowing food whole, their muscular stomach crushes it into smaller pieces for digestion. Some prey that sturgeon eat are polychaetes (worms), mollusks, and crustaceans. There are four barbels between the tip of their snout and their mouth which they use as sensors to locate food. 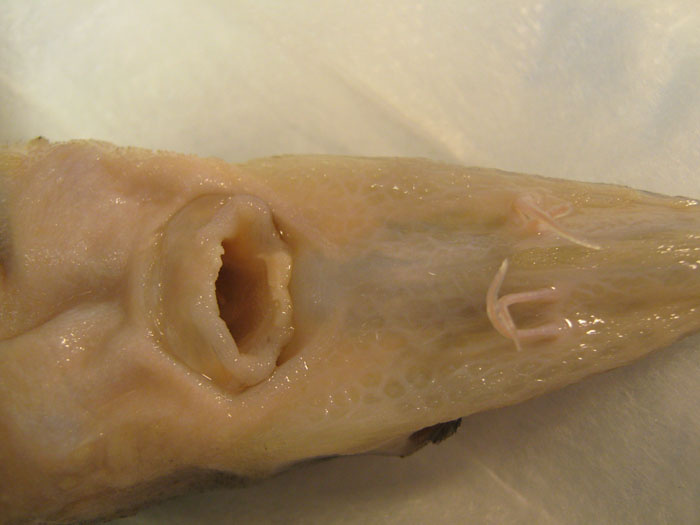 Native Americans of North America fished for sturgeon using spears, lassos, clubs and weirs. Sturgeon are known to leap out of the water on occasion and would even sometimes jump right into their boats! They were known to be curious fish, so one fishing method used by the Housatonic Native Americans to catch sturgeon was fishing at night holding a torch above the water. The sturgeon were so curious that they would come right up to the surface of the water to check out the strange sight. When they came close enough, they would get bopped on the head with a club or an axe by the fisherman who would then drag the stunned fish into the boat. In addition, North American Native tribes named the full moon in August “Sturgeon Moon” because the fish was plentiful at that time

Sturgeon were found in great numbers when European settlers first arrived in North America. Some accounts recorded that there were so many sturgeon in the James River, you could walk across the river on their backs. In the late 1700’s George Washington made recreational sport of fishing for sturgeon on the Potomac River. They were very strong, large fish, so when fishermen would catch a sturgeon with a lasso, they would brace themselves in the boat for the sturgeon equivalent to a “Nantucket sleigh-ride.” However, it was not always fun and games with sturgeon on the Potomac. A sturgeon actually killed a Continental Army officer when he was crossing the Potomac as it jumped into his boat, landing on him and breaking his legs.

Sturgeon were considered to be a delicacy and a “royal” fish back in England. To be a “royal” fish meant that the king had first rights to any sturgeon that were caught. The colonists were suspicious of the Native Americans who consumed these scute armored fish, and regardless of their “royal” status in Europe, continued to refuse to eat the sturgeon. However, after harsh winters with little food, and so many of these large fish in great abundance, Captain John Smith convinced them to let go of their reservations and begin fishing for and making good use of sturgeon.

During the late 1800’s, the great “Caviar Rush” began. News of the abundance of sturgeon with caviar or “black gold” on the East Coast spread quickly. Many flocked to the coast in search of riches and this became known as the great “Caviar or Black Gold Rush.” By the end of the 1800’s and beginning of the 1900’s, sturgeon stocks had declined drastically. Due to overfishing, close to seven million pounds of sturgeon were reportedly caught in 1887, by 1905 it had dropped to only 20,000 and by 1989 a mere 400 pounds of sturgeon were recorded. In a time span of only 100 years, catches of sturgeon went from tens of thousands of fish down to only a handful.

Where Can You Find Sturgeon?

Although it is no longer legal to fish for or keep Atlantic and shortnose sturgeons due to their Endangered Species Act listings, they are still caught accidentally as bycatch in some commercial and recreational fisheries. Both species are particularly vulnerable to fisheries that fish with gill nets. The fishery practices commonly used with gill netting involve setting and leaving nets for long periods of time, anywhere from several hours to days. Atlantic and shortnose sturgeons swim into these nets and can get stuck. If their gills get closed shut by the nets, they can suffocate and die. Another threat posed by nets is what happens when nets are lost. Due to weather, storms, and rough waters, nets can break free and get lost. These are called “ghost nets” and can float around the ocean and rivers entangling sturgeon as well as marine mammals and sea turtles.

Dams on rivers pose another threat to Atlantic and shortnose sturgeons. Dams were constructed on many rivers along the East Coast. They were made for many reasons including production of electricity through hydropower and for diversion of water for agriculture. Dams can be harmful to  sturgeons by blocking the way to their spawning grounds. If they are unable to reach their spawning grounds, they may choose to not spawn at all, or end up spawning in an area that is not suitable for the development of embryos. Many dams have special fish ladders or fish ways that are designed to allow for the passage of fish upstream of the dam. Sturgeon, however, do not use the fish ways to pass the dam, and even if they did, there have not yet been suitable methods designed for passage back downstream.

Pollution and dredging can also be detrimental to sturgeon survival. Pollution can be caused by many different actions, and can include run-off from agricultural sites, roadways, construction sites, and pesticide applications. All of these things can affect water quality. A couple of water quality factors that affect sturgeon are dissolved oxygen and temperature. Run-off from agricultural sites can include fertilizer which can cause harmful algal blooms. When algae blooms, it can take oxygen out of the water which can kill fish and other aquatic life. Temperature is another factor that can affect the migration spawning cues for sturgeon. The spawning migration begins with the rise in temperature in the spring. Hatching time and egg development are also dependent on temperature.

Dredging is another potential threat to sturgeon, and is when the river bottom is dug up to either make the river deeper or wider. Sturgeon can be caught in the dredge and killed. Dredging can affect spawning habitat as well by suspending fine particles and pollution which can cover over the gravel and cobble substrate that is needed for spawning.

Scientists and researchers have been studying sturgeon for many years. Even though much research has been conducted, there is still a lot of information that we do not know. Where exactly are the spawning grounds? Where do they go in the winter? Why do they jump? To try to answer some of these questions, researchers have been using tagging techniques to track and follow sturgeon throughout their migrations and coastal movements. A few types of tags that researchers have used are satellite tags, acoustic telemetry tags, and PIT (passive integrated transponder) tags. Each tag aids researchers in getting different information that they are searching for.

PIT tags are tiny little microchips that are placed under the skin of the sturgeon. The tag is inserted with a small needle which pierces the skin and allows the tag to be placed just under the skin. When researchers catch sturgeon through their sampling efforts, they scan then with a PIT tag reader. PIT tag readers are small handheld devices that activate the tag when being scanned and record the unique and individual tag number. They can then take that tag number and find out in what river or where on the coast that fish was originally tagged. 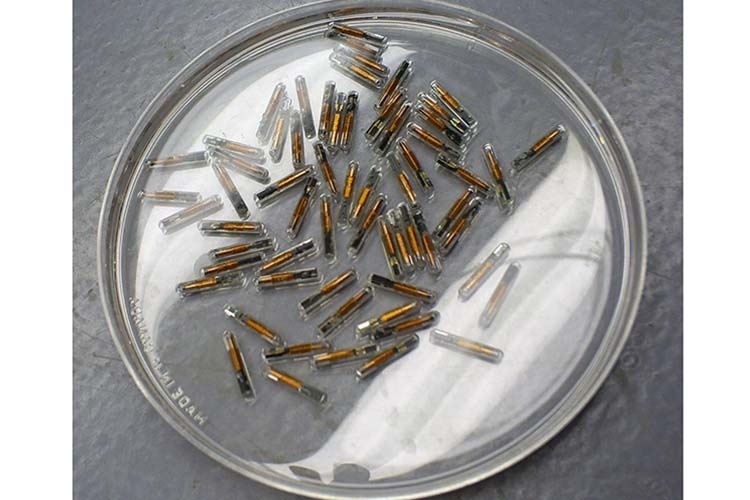 Acoustic telemetry tags serve to give a broader picture of the migrations of sturgeon. Acoustic tags are inserted by researchers through a more surgical approach. Using a scalpel, the researcher will make an incision (cut) into the body cavity large enough to fit the tag just under the fatty skin layer. This incision is then closed with stitches. These tags are larger than the typical PIT tag, and are programmed to “ping” or send out signals at specific intervals. Each of these tags has a unique identifying number. When a tagged fish swims near one of the acoustic telemetry receivers, the receiver records the number, date, and time. These acoustic receivers, which are about the size of a 1 liter bottle of soda, and are deployed up and down the coast in coastal waters as well as in rivers and estuaries. Researchers go to their receivers periodically and download all of the data that was collected. Each time a tag is identified by the receiver, it is called a “hit.” The researcher can then see where and when certain fish “hit” the receiver. With this information, and through cooperation with other researchers, they can begin to see exactly where the fish has been traveling.

Satellite tags are a more in depth and comprehensive collection system. 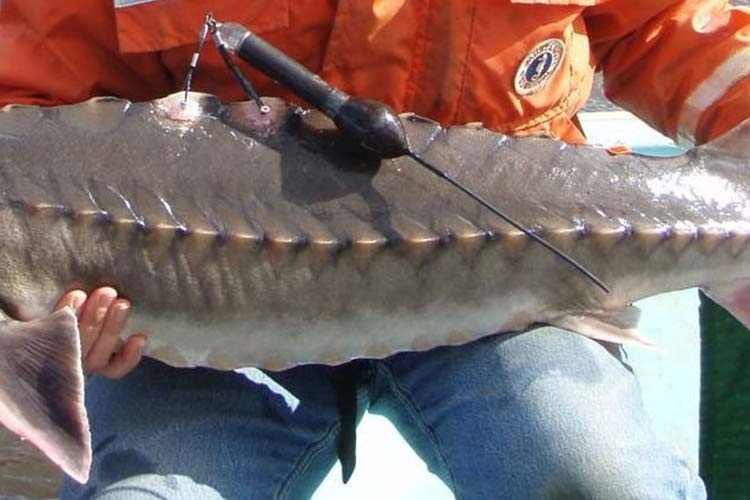 With all of the data that can be collected from various kinds of tags, they are able to create maps that will helpfully illustrate the travels of Atlantic and shortnose sturgeons.