Please call our 24-hour stranding hotline at (866) 755-6622 if you see injured or entangled live or dead whales in the water or on the shore. 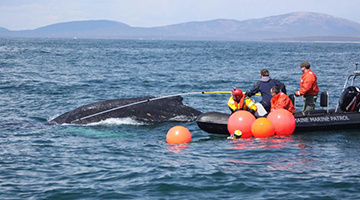 Entanglement of marine mammals in fishing gear and/or marine debris is a significant problem throughout the world’s oceans. Entanglements involving humpback whales, North Atlantic right whales, sperm whales, minke whales, fin whales, sei whales, and blue whales have been reported along the eastern seaboard of the United States and Canada.

NOAA Fisheries, in cooperation with the Canadian Department of Fisheries and Oceans and the United States Coast Guard recognize the need to protect endangered marine animals, in the waters of the United States and Maritimes Region of Canada.

Some animals can be disentangled and released before they drown, starve, or die from infection. However, disentanglement is not the solution to the entanglement problem. Preventing entanglements is our first priority.

Entanglement response efforts are dependent on upon the commitment of many state and federal agencies (e.g. NOAA Fisheries Office of Law Enforcement, the U.S. Coast Guard, Maine Marine Patrol), non-profit organizations, fishermen, and other individuals working together in a community-based effort. Whale rescue is complex and dangerous for the whale rescuers, as well as for the animal. Network response to entangled whales may only be attempted by authorized persons who are experienced, trained, knowledgeable, and have proper support and equipment, working under NOAA Fisheries' permit.

Work has and continues to further define safety protocols and establish guidelines for training and designation of response levels within the program.

What should I do if I see an entangled animal?

If you see an animal that appears entangled or in distress, immediately report it. Real-time reporting helps increase the chance of a successful disentanglement, and it allows wildlife managers and responders to better understand what led to the entanglement, which helps guide future responses.

For large whales that appear to be in distress, please contact the entanglement specialists in your region via the national entanglement response and stranding network. If you are on a boat without access to a cell phone, please contact the U.S. Coast Guard on VHF channel 16. Stand by the animal until you’ve reported it, but for everyone’s safety, keep your distance—100 yards or more is recommended.

If you encounter an entangled dolphin, porpoise, seal, or sea turtle contact your local responders via the national entanglement response and stranding network. After you report an entangled animal, the responding team will determine whether a response is possible.

When disentangling a whale, a secondary goal is to document and recover the entangling gear. Any entangling gear recovered is sent to NOAA Fisheries gear experts for analysis, and to the NOAA Office of Law Enforcement if the gear is considered non-compliant with regional or seasonal fishery restrictions.

Information collected through gear analysis is used to inform the Atlantic Large Whale Take Reduction Team, charged with making recommendations to NOAA Fisheries to reduce serious injuries and mortalities of large whales in commercial fisheries. Network members are among the many stakeholders on the Take Reduction Team. Gear removed from stranded and entangled whales provide NOAA Fisheries and the Team with the only consistent proof that fishing gear modifications for whales are working or not.