Biologists at NOAA Fisheries’ Southwest Fisheries Science Center have cracked the code for how to spawn Pacific sardines in the laboratory, opening a new window on the life cycle of the commercially important species.

Like many species, sardines require just the right conditions to reproduce. Researchers working with sardines in the Southwest Fisheries Science Center’s Experimental Aquarium had tried for decades to identify those conditions. Then in early March, they hit upon the right combination of conditions and documented sardine spawning for the first time in captivity.

“The biggest challenge is getting them comfortable enough in captivity to get them ready to spawn, because we’re trying to replicate the conditions they would experience in the ocean,” said John Hyde, leader of the Experimental Aquarium and Fisheries Genetics Program at the Science Center.

The advance will allow scientists to more closely study and better understand the early life cycle of the species that is known for wide swings in abundance. That in turn will help biologists refine the life-cycle models they use to estimate the size of the sardine population and determine whether enough fish are available to support commercial harvest.

Scientists from the Southwest Fisheries Science Center Fisheries Resources Division varied the lighting, temperature, feed and other conditions in tanks holding the small silvery fish to encourage them to reproduce. Once they recognized that the sardines were ready to spawn, they injected the fish with hormones to induce spawning. The sardines spawned for the first time on March 1, and then again the next day when researchers observed a second batch of fertilized eggs in the tanks. 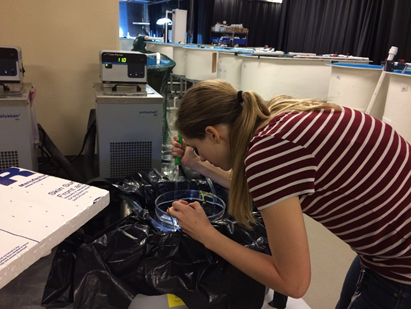 FRD contractor, Megan Human, taking a subsample of eggs during the egg-rearing experiment at the SWFSC Aquarium.

Researchers collected newly spawned eggs on March 1 and reared them in incubators at three different temperatures: 11°C, 13°C, and 15°C, chosen to mimic the range of temperature conditions they are likely to encounter during sardine spring spawning in the southern California Bight. Staff continued to rear the eggs over the following days until they hatched, sampling the eggs in each incubator every two hours to track their progress. Then they sampled the larvae once or twice per day through exhaustion of the yolk. The preliminary results of the egg-rearing data are still being analyzed.

Spawning sardines in the laboratory can give scientists new insight into early development of the fish, since it is very difficult to capture sardine larvae in the wild without damaging them. For example, sardine ear bones (called “otoliths”) provide natural records of the water conditions experienced by individual fish throughout their life.

“By combining the chemistry of these bones with genetics, we can better understand where larvae and young fish are spending their time and how they may respond to changing ocean conditions such as shifting temperatures or ocean acidification,” said Emmanis Dorval, the lead scientist of the spawning experiment. “Ultimately, the research can lead to a better understanding of how biological and ecological factors influence sardine populations along the U.S. West Coast.”

The experiments to develop methods of sardine spawning are a collaborative effort between various FRD programs (including the Life History, Ichthyoplankton Ecology, and Genetics, Physiology and Aquaculture groups) in sample collection, processing, and fish rearing.