With an unprecedented number of right whale deaths over the last three years, NOAA and partners ask the public to give this critically endangered species space as they make their way south. 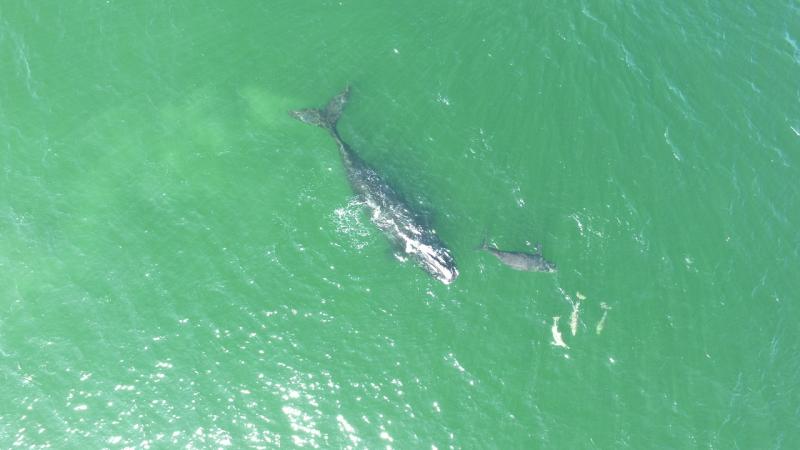 North Atlantic right whales are on the move along the Atlantic Coast of the United States. NOAA is cautioning all boaters to be vigilant, slow down, and give these endangered whales plenty of room. This will avoid accidental collisions and disturbing the whales as they migrate south. The agency is also asking fishermen to remove their unused gear from the ocean to help avoid entanglements. Vertical lines with required markings, weak links, and breaking strengths are also required by law.

North Atlantic right whales are protected under the U.S. Endangered Species Act and the Marine Mammal Protection Act. Scientists estimate there may be less than 400 remaining, making them one of the rarest marine mammals in the world. The species has been experiencing an “Unusual Mortality Event” since 2017, which is ongoing. Over the past three years, at least 32 dead and 13 seriously injured whales have been documented in the UME. This represents more than 10 percent of the remaining population. The leading causes of the UME are vessel strikes and entanglement in fishing gear.

Biologists are very concerned about the future of right whales. Coupled with a recent increase in deaths and injuries, scientists say there are fewer breeding females producing fewer calves each year.

NOAA Fisheries is partnering with the Georgia Department of Natural Resources, the Florida Fish and Wildlife Conservation Commission, Clearwater Marine Aquarium and the U.S. Coast Guard. They are reminding boaters, anglers, and coastal residents that the North Atlantic right whale calving season begins in mid-November and runs through mid-April. Mariners should stay alert and keep their distance.

Every winter, many right whales migrate more than 1,000 miles. They travel from their feeding grounds off Canada and New England to the warm, shallow coastal waters of South Carolina, Georgia and Florida's east coast. These southern waters are the only known place where right whales give birth and nurse their young. This makes it extremely important for people to be aware of the whales' movement and migratory patterns. According to biologists, any disturbance could affect behaviors critical to the health and survival of the species.

Federal law requires vessels, paddle boarders and aircraft, including unmanned aerial vehicles, or drones, to stay at least 500 yards (five football fields) away from right whales. These restrictions are in place to reduce the risk of harassment or collisions between right whales and boats. Vessels 65 feet and longer are legally required to slow to speeds of 10 knots or less in Seasonal Management Areas along the East Coast. This includes the calving and nursery area.

Entanglement in fixed commercial fishing gear is a major threat to right whales. There are restrictions on where and how commercial traps, pot gear and gillnet gear can be set. These restrictions include seasonal closures and gear modifications such as sinking groundlines, weak links and gear markings.

Right whales often swim and rest just below the surface and can be invisible to approaching vessels. It's important for vessel operators to follow applicable speed rules, and for boaters to slow down whenever possible.

U.S. speed restrictions are in place for certain vessels along the mid-Atlantic November 1–April 30 and in the southeast U.S. calving area November 15–April 15.

The federal vessel speed rule does not regulate vessels under 65 feet. However, collisions with smaller vessels have occurred, resulting in serious injuries to whales and expensive damage to boats.

Watching for Right Whales: How You Can Help

NOAA and its partners conduct aerial and vessel surveys off the coast of Florida and Georgia throughout the calving season. These surveys:

When observed, NOAA and its partners also respond to reports of entangled whales and investigate injuries and mortalities.

To report right whale sightings, especially dead, injured, or entangled whales, please contact NOAA Fisheries at (877) WHALE-HELP (877-942-5343) or the Coast Guard on marine VHF channel 16. If safe, and from the legally-required 500-yard distance, please take a photo and note the GPS coordinates to share with biologists. 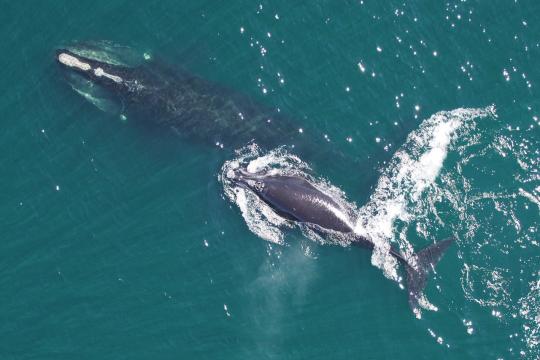