Meet the Interns: Sammy and Nikola 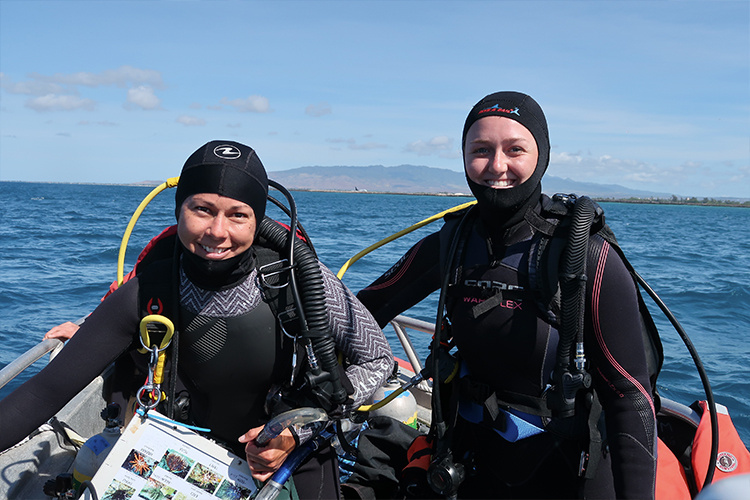 Interns are an important part of NOAA Fisheries' vision.

Through its various scholarship and internship programs, such as the Ernest F. Hollings Undergraduate Scholarship and the Educational Partnership Program (EPP), NOAA not only gains young talent to help fulfill its mission, but also gets to play a strong role in training the next generation of marine scientists and resource managers.

Sammy Iliff is a Hollings scholar who was born in Key Largo, Florida and grew up in the St. Petersburg area. She attends Florida Atlantic University, majoring in liberal arts and sciences with a concentration in marine biology and minoring in applied math.

Originally from British Columbia, Canada, Nikola Rodriguez also spent some time in Florida as a child and moved to Hawaiʻi in 2012. She is an EPP scholar who is attending the University of Hawaiʻi at Hilo, majoring in marine science and minoring in biology.

Both Sammy and Nikola are interns in the NOAA Fisheries Pacific Islands Regional Office in Honolulu, Hawaiʻi. They work with Matthew Parry, a fishery biologist with the NOAA Restoration Center and the Damage Assessment, Remediation and Restoration Program, on a coral restoration project in which fragmented corals are being relocated onto a coral nursery platform 55 feet (17 meters) off Oʻahu's Reef Runway.

In the following Q&A, edited for clarity and length, Sammy and Nikola discuss their internships, their interests, and what their futures hold.

Tell us about your current internship with NOAA.

Nikola: My interest is looking at corals of opportunity that we can use for the nursery platform. We use SCUBA to go and collect fragmented corals — corals that have been fragmented due to storm events or just toppled over due to loose ground or something else. We put those on the platform and then basically just assess survivorship and overall health of the corals. We see how they do in that environment because there aren't really any nurseries that are designed this way. It's like a table and all the corals just sit on it, so there are no strings [holding the corals or structure in place] or chances of entanglement for marine life. It's a pretty unique platform and I'm more focused on just the coral aspect of it. 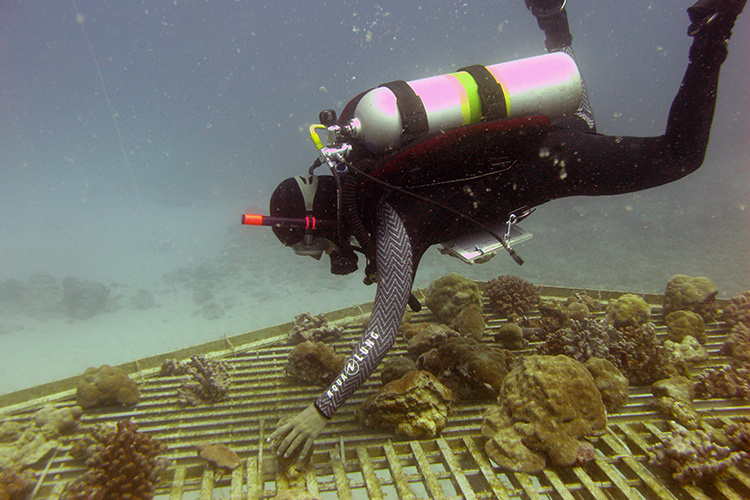 Were you both familiar with NOAA and what we do before you came here?

N: I'm a NOAA EPP scholar and that gives you the opportunity to apply to two different internships. So last year I did an internship with NOAA's Office of Exploration and Research. I went to Washington D.C. for a month and then I spent a month on the [NOAA Ship Okeanos Explorer] out at the Johnston Atoll unit.

S: I'm kind of from a NOAA family. My parents actually both worked at NOAA at separate times, so I've grown up knowing and hearing [about it].

Did you have any mentors or heroes growing up that got you interested in this field of work?

N: Sylvia Earle and Jacques Cousteau, honestly! It's such a cliché, but so true. I love them both; they're so amazing. I just always remember looking at all the books and the pictures [of their work] and liked everything about it.

S: I don't know if I do. My parents would throw us in the ocean, basically. Like, "Go entertain yourself in the mangroves, kids." Both my parents were in environment science or marine biology so I grew up with it. I kind of just wanted to do it my whole life.

N: I've always been interested in marine science or marine biology, but I never had anybody in my family who did that. My uncle did, but I didn't learn that until I was older, when I started getting into scientific diving. He's like, "Oh, I did that." But he's super jealous that I got on the NOAA ship. 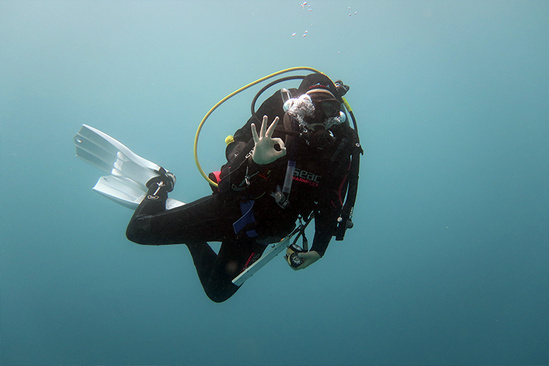 Has there been any challenges or hurdles you had to overcome during this internship?

N: I think designing and basically coming up with really good methods for doing our survey. And learning the dive site because it does get variable conditions. I think the most challenging thing would be trying to do fish surveys with a big swell and low visibility.

S: Yeah, we had a solid week of a "shakedown" to get all the kinks out of the fish surveys, bad camera quality, and losing gear and stuff.

N: Yeah, because Matt basically let us design how we wanted to collect data and develop the project. So, for the first week our data was kind of "eh." But by the second week, we got it down and we got a good method going.

S: And getting boat support is not that easy. Matt doesnʻt have a boat of his own.

N: The [NOAA Pacific Islands Fisheries Science Center] has given us boat time. The Monument program has donated a lot of boat time for us as well. And it was cool because we got to do support diving for them. And then [the Hawaiʻi Department of Aquatic Resources] gave us some boat time. It's really cool because we get to meet all these different people and dive with them.

S: And we helped them out on a couple fish surveys. And releasing urchins in Kāneʻohe Bay.

N: And they found derelict nets out on the patch reefs that we got to help them pull out. 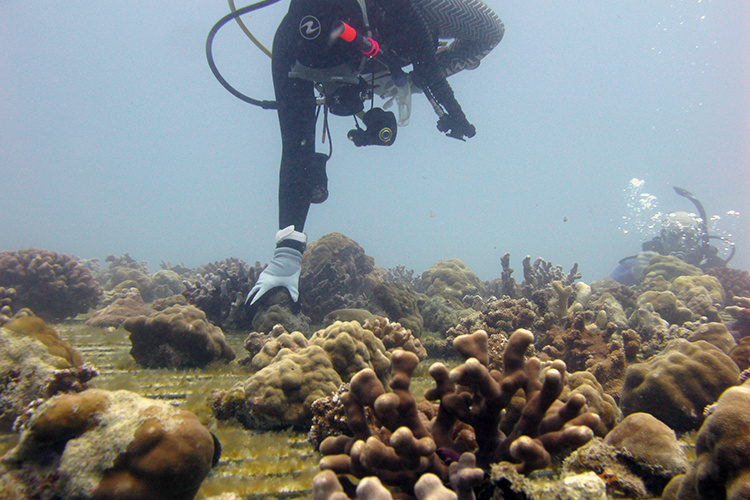 What has been your favorite moment so far during this internship?

S: We were once doing a fish transect on one of these plots and I look over at Nicola and there's a huge monk seal right next to her, checking her out.

N: I was setting the transect line and she punches me.

S: Yeah, I punched her arm and was like, "There's a monk seal!" We see some cool stuff at the site. We see turtles…

N: Hammerheads. We've had a pod of dolphins.

S: Yeah, but [the monk seal] was almost in her transect. The guys on the boat saw it, too, and they thought it was a whale.

N: It was over six feet long. She was like, "Oh, it was bigger than you." I looked over and there's a massive thing right next me and it was this huge monk seal.

S: And there's this half-second of heart attack.

You're both planning on going to graduate school. Do you already have an idea of what you eventually want to do?

N: I want to try to get into a lab here and use photogrammetry for looking at coral reef ecosystems and possibly growth rates because it's similar to the project that I'm working on now. Photogrammetry is making 3D mosaics. And you can upload [the coral mosaics] into programs like ArcMap and you can do 3D analysis of the volume and rugosity and sizing of the area.

S: I would love to keep doing what we're doing with Matt right now: Coral restoration and restoration ecology and stuff like that. I'd love to maybe get into a lab out here and maybe keep working with Matt. Or a lab down in Florida. I have a long list of options that I'm looking at.
Has your time here, and the lessons you learned here, changed what you might want to do in the future or has it more cemented what you already thought you were going to do?

N: I would say cemented for me. I've just had a lot more opportunities come open for me, which is really cool.

S: Absolutely. And it's definitely cemented for me, too. I initially wanted to do restoration ecology because it seemed fun. But now know I could do this every day. I'm super happy about it.

S: I'd say don't settle for an internship that's just okay. Find one that you're really excited about. Some people just kind of find one that they're like, "Okay, it's alright." They don't really take advantage of the fact that you can literally do anything anyone in NOAA is doing, as long as they're willing to take on an intern. I'd totally say take advantage of that because we have unlimited access.

N: I'd say don't be scared to pitch an idea. People are willing to basically assist you to do whatever you want as long as you have the interest.

S: We got lucky with Matt, in the fact that he is very accommodating of our project ideas.

N: The EPP even told me that if there's somebody you want to work with that isn't necessarily on the list server [of available projects], contact them and be like, "Hey, I'm interested in working with you or on what you do," and see if they'll design an internship for you. A lot of people are willing to do that because we're paid by our scholarships so it's not coming out of their branch. It means we're just extra hands, so a lot of people are welcoming to the idea of bringing on new people and new scholars.

Is there anything else about your experience you want to mention?

N: I'm just really thankful for everybody who's helped us out and given us opportunities. I got on the [NOAA Pacific Reef Assessment and Monitoring Program] cruise, which is really cool. I get to go work with the Monument folks. That's a great outcome for me with this scholarship and internship; that was huge for me because it was what I really wanted to do.

S: I guess I'd say I definitely underestimated how much I would learn coming out here. Learning field methods alone was huge. I've never really done fish surveys or coral surveys, but we do that a couple times a week now. I'm getting really comfortable with that. And then just kind of being responsible for our own project is really good. I mean, it's something I've done before but it's a different setting here. We've learned so much it's crazy. We've won the jackpot with this internship.