Every year, dozens of whales become entangled in fishing gear off the U.S. Atlantic coast. The Atlantic Large Whale Disentanglement Network works to save them.

Transcript: How to Disentangle a Tangled Up Whale

Rich Press: One of the many hazards that whales face is fishing gear. Every year, at least 30-40 large whales become entangled in gear off the U.S. Atlantic coast alone, and those are just the documented cases; the true number is likely much larger. Entanglement is often fatal for the whales, and it's a particular threat to critically endangered species like the North Atlantic right whale. To help reduce the threat, NOAA and several other agencies maintain a network of emergency responders whose job it is to disentangle large whales. This can be an extremely dangerous task. After all, they’re often working with wild animals that are tremendously powerful and painfully wounded.

Today we have Jamison Smith on the line. Smith leads NOAA’s Atlantic Large Whale Disentanglement program, and he explains what happens to an animal at the moment it becomes entangled.

Jamison Smith: It’s a very, I’ll say violent event in the sense that the animal really freaks out when it feels the pressure. The animal thrashes around, tries to break through it. They do everything in their power to get out of it, even backing up as best they can.

Rich Press: Of course, whales aren’t designed to back up, and if they’re unable to slip the line, they can end up in some pretty serious trouble. If the line is wrapped around the animal’s mouth or its head, it can prevent them from feeding. Then, there’s the question of drag. If an animal is trailing only ten feet of line, well, in that case the drag is pretty minimal, but…

Jamison Smith: If that line is 100 feet, the drag is tremendous, and so that animal has to overcome all that drag to just swim through the water.

Rich Press: The line can also cut into the animal’s skin, wounding it and causing terrible infections, and if the animal is still growing, the line can bind its growth and cause deformities. Many animals that become entangled suffer a terribly drawn out and painful death. The job of the Large Whale Disentanglement network is to save them before that happens. In addition to NOAA, the network includes federal and state agencies, universities and nonprofits. If a boater sees an entangled whale, they can call a 24-hour hotline, and responders will be onsite as soon as possible, often within a few hours. So, how do these experts untangle an entangled whale?

Jamison Smith: It’s not easy. There are people on YouTube that state that, “The whales knew we were there to help, and they thanked us afterwards, and they worked with us,” and I’m not saying that that’s not what they perceived happening. They were there; I wasn’t, but from my experience of working with many, many whales, they don’t know we’re there to help. The situation they’re in, by the time they’ve thrashed and struggled and tried to get out of it, it’s probably tightly bound on them. They’re probably in a fair bit of discomfort or pain.

Our techniques aren’t gonna immediately help that, that we tug on lines, we cut lines. We’re probably adding to their discomfort in the very short term we’re working with them, and so what we’ve developed over the years with our partners are techniques that are as safe and as effective as possible.

Rich Press: The first thing they do is attach a satellite transmitter to the entangling line. That transmitter is the most important piece of equipment that the team has, because it allows them to track the animal. If they don’t have the right gear or personnel nearby, if the light is failing or the weather’s bad, they can track the animal’s movement and bring all the necessary resources to bear right when everything aligns. But, not everything they do is super high tech.

Jamison Smith: Well, a lot of our techniques that we use are based on historic whaling techniques. What the whalers would use is they would use a harpooner lance, and they would lance the animal, and that wasn’t really to kill it. That was to attach a barrel or attach a log or something to it, and it tired it out. And then, they would go in with the final blow to kill it, and so we’re not, obviously, trying to do that. We’re trying to slow it down, control it just enough to make it safer to work in close proximity to that animal.

We don’t lance the animal, but we do attach into the gear with a grapple or some other form of connection, and we work from a small, soft inflatable, kind of like a Navy SEAL inflatable, combat inflatable. We pull up the motor and we’re going under whale power at that point.

Rich Press: That’s what New England whalers used to call a “Nantucket sleigh ride.” It adds a lot of drag, and that allows the team to safely get close enough to cut the gear. They have many types of specially-designed tools to do that, including a knife that they deploy from a long pole. That knife is attached to a buoy so as the animal swims through the water, the buoy pulls the knife and cuts the gear. They also use sedatives that they deliver with a two-foot-long tranquilizer dart.

Jamison Smith: It’s a big, big dart. You wouldn’t want to get hit by it.

Rich Press: The sedatives don’t knock the animal out. You can’t do that with an animal that breathes air and lives in the ocean, but it calms the animal down, makes it a little less aggressive. That’s especially useful with right whales, which are particularly stubborn and aggressive. They’re also particularly endangered. There are only about 500 of them left, and the disentanglement teams have made a big contribution to their survival.

Jamison Smith: Especially when you’re dealing with a critically endangered species like a right whale, the females matter tremendously. Genetic studies have shown that it’s only a handful of the males that are directly contributing to the offspring, so on a population level, males, I hate to say it, but aren’t that important. The successful release of an adult female or even a young female that can go on to become a successfully breeding adult is critical. We’ve had roughly about 25 cases with right whales over the years that we’ve successfully intervened and were able to help that animal. Of those 25, eleven were females that went on to produce calves.

Rich Press: For a critically endangered species with a total population of about 500, saving eleven females that went on to produce calves so far, that’s huge. So, what should you do if you’re out on a boat and you see an entangled whale?

Jamison Smith: Everyone, whether you’re a recreational boater, a commercial fisherman, a charter fisherman, any professional mariner on the water has a role to play. If you come across one, the safest thing to do is to stand off a distance, because there might be a lot of line back there that you can’t see that’s gonna foul your propellers, and we don’t want that. We don’t want to put you in a bad spot, so what we ask is we have these trained teams up and down the coast and situated all over the country, actually, and we have hotlines to get to them that’s 24-hour manned. You always get a live voice, and they’ll dispatch a team out to that area.

Rich Press: After making the call, and I’ll give you the hotline numbers in a minute, stay with the animal until help arrives. If you can’t, try to hand off to another boat in the area. Also, take whatever photos and videos you can. That provides essential information to the responders.

Jamison Smith: Boaters, even commercial fishermen and professional mariners, should not take matters into their own hands. For one, it’s illegal. These animals are protected, but more importantly, it’s dangerous. We go through significant amounts of training on how to properly and safely do this stuff, and the last thing we want anyone to do is to get hurt. We have trained professionals to do it. Let them do their job.

Rich Press: Smith made a point of saying that the network does more than disentangle whales. It also works to prevent entanglements from happening in the first place.

Jamison Smith: No one wants these events to happen. It’s expensive, very damaging to fishermen’s gear.

Rich Press: NOAA and other scientists are working directly with fishermen to develop new types of gear that reduce the severity of entanglements, such as weak links that snap when whale-sized force is applied.

Jamison Smith: Instead of becoming a life-threatening entanglement to the animal, as a very minimal interaction they might swim off with a – some scrapes, some minor injuries, but the fishing gear is intact. The whale is healthy and can go do what healthy whales should do, and it’s really a good situation for everyone.

Rich Press: In the long run, that’s gonna do more for the whales than even the most daring rescues.

As always, you can get more of the story on our website. That’s www.fisheries.noaa.gov/podcasts. There you’ll find more info on the disentanglement network and also on the critically endangered Atlantic right whale. 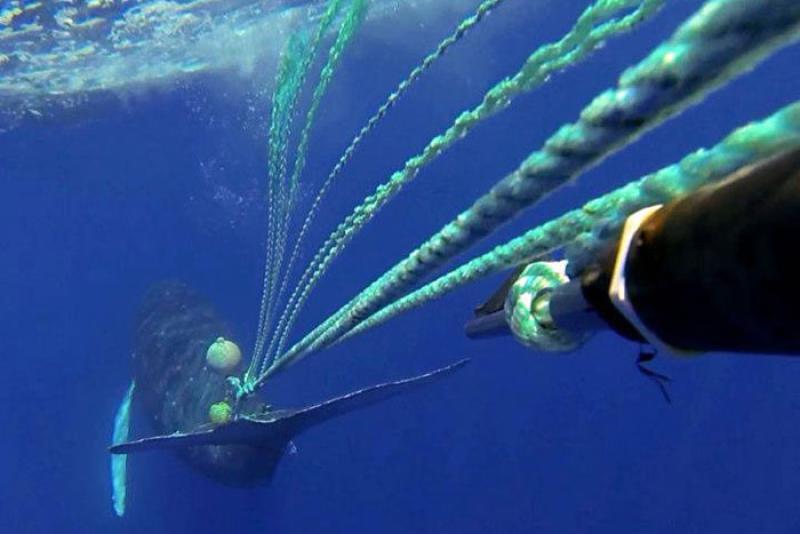 Every year, dozens of whales become entangled in fishing gear off the Atlantic coast of the U.S. This is often fatal for the whales, and it's a particular threat to critically endangered species like the Atlantic right whale. To help reduce the threat, NOAA and several other agencies maintain a network of highly trained emergency responders whose job it is to disentangle large whales. This can be an extremely dangerous task. After all they're often working with animals that are tremendously powerful and painfully wounded.

Jamison Smith leads NOAA's Atlantic Large Whale Disentanglement Program, and in this podcast, he explains some of the techniques that marine mammal experts at NOAA and partner organizations have developed to safely disentangle a large whale.

Last updated by Office of Communications on September 01, 2021