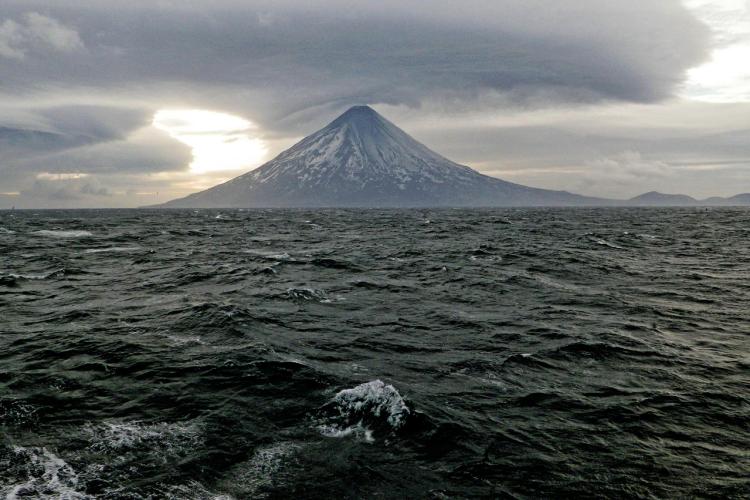 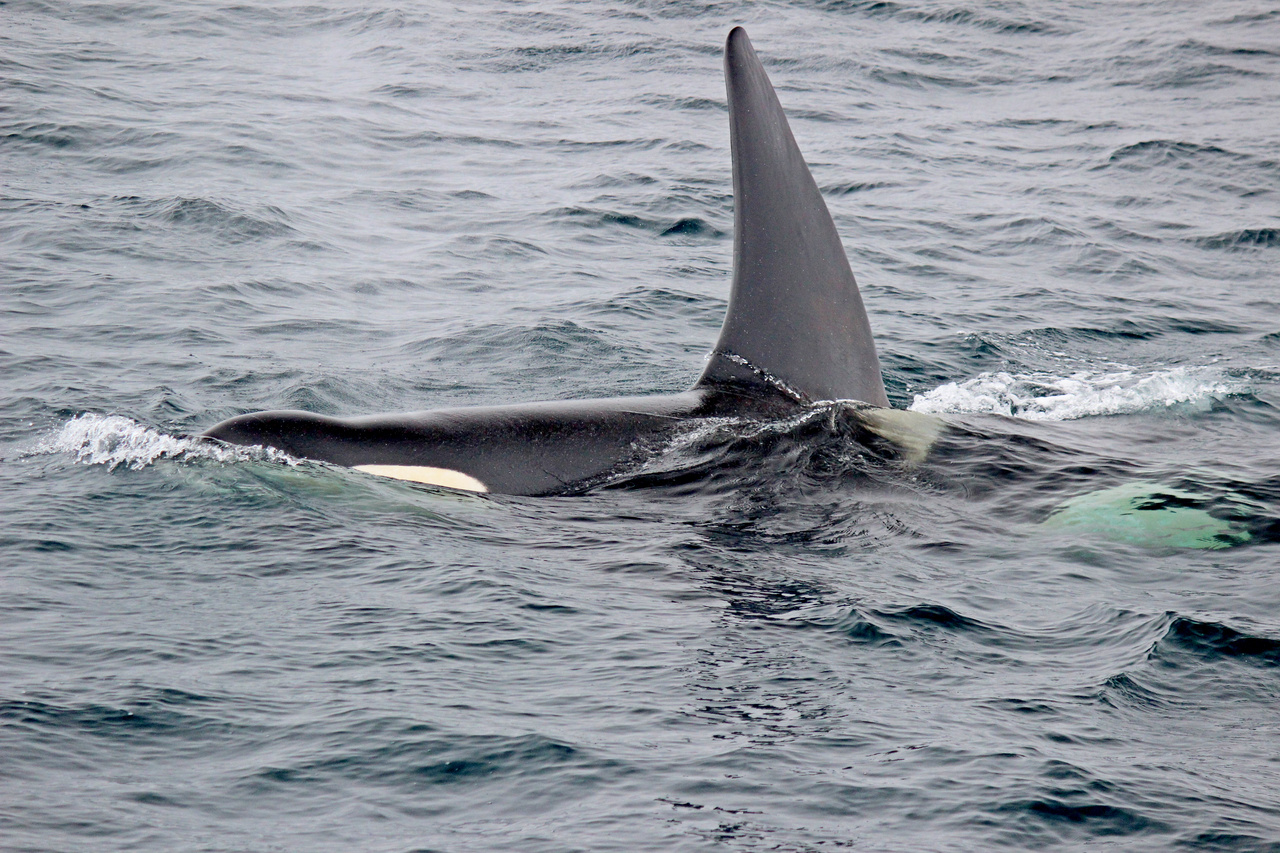 A male killer whale cruises by the survey vessel.

The seas have picked up and a few of our scientists have begun to feel it, but a little weather never stopped us. We are halfway through this leg of the survey and catch rates have been picking up. The past few days have been very busy with collecting otoliths and tagging and I’ve grown very used to the smell of fish, but that doesn’t mean we haven’t been able to take in the sights. I’ve seen more volcanoes in the past week than I have in my entire life (we’ve seen two). We have also seen some amazing wildlife as well. Killer whale dorsal fins pop up in the distance and seabirds flock to the boat to pick off scraps. We even saw some endangered short-tailed albatrosses, both adult and juvenile, which was an uplifting sight. 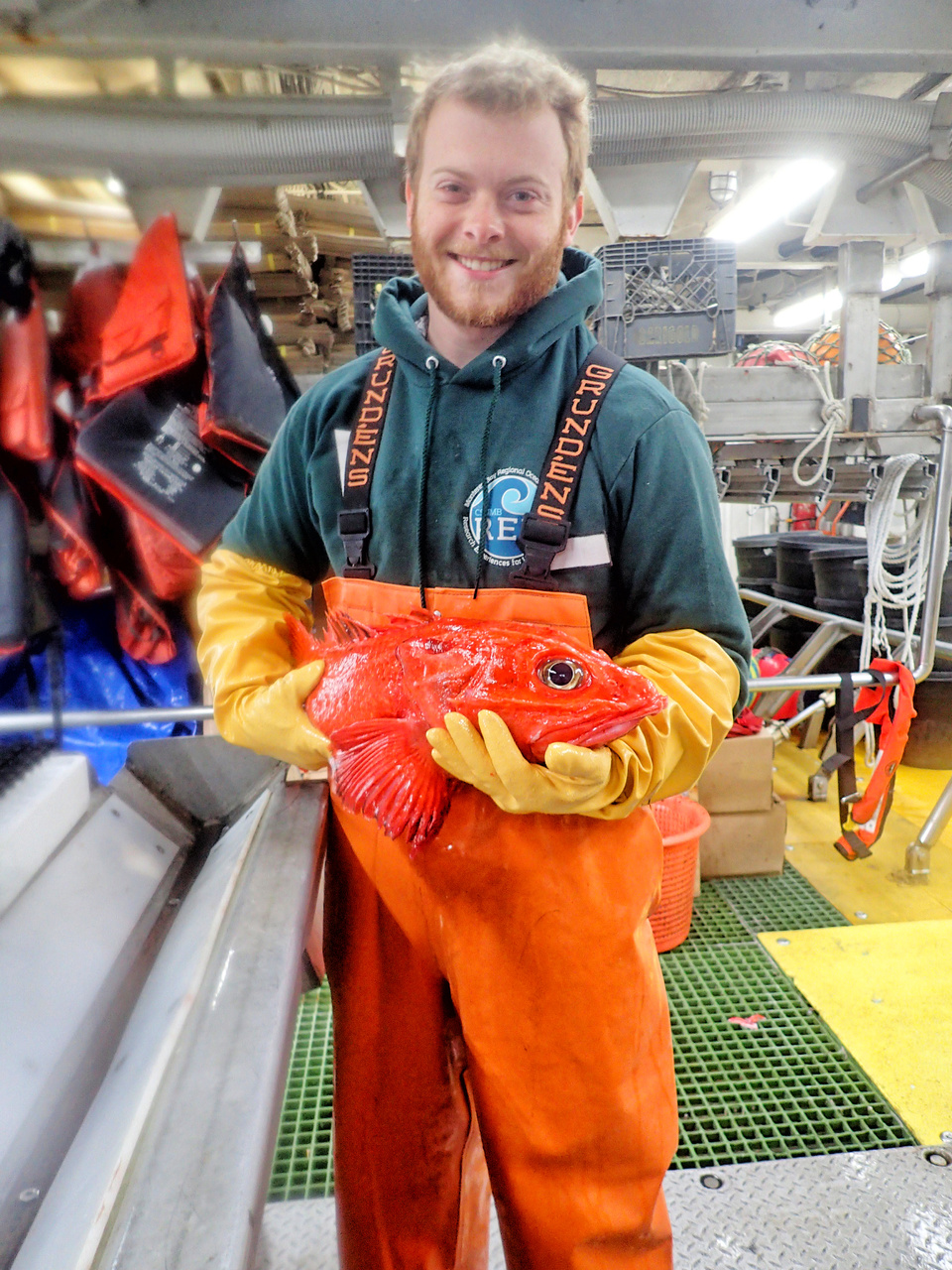 On the line there was variety of fish as well. The most important to us of course were the sablefish, also known as black cod. This fish is one of the most important in Alaskan fisheries and is prized for its texture, flavor, and value. Lots of sablefish make the fishermen very happy. Sablefish inhabit the muddy bottom usually from depths of 300 meters (900 feet) or deeper. Most of the fish we have caught have been between 50 and 65 cm (19-25 inches) long, but we have pulled up one or two that were longer than a meter (39 inches).

Another group of fish we see a lot of are Pacific cod, or just “P. cod” as they are called on the boat. These fish are also an important species that supports a large industry. We find these at shallower depths than sablefish and at similar sizes to sablefish or even little bit bigger.

We also catch quite a bit of rockfish. The main species we see are shortraker, rougheye, blackspotted, and shortspine thornyhead. You have to be careful handling these back in the factory. Most have large dorsal spines that carry a venomous mucus. If they poke you, it feels similar to a bee sting (only worse). A thornyhead got me while I was passing fish yesterday and it’s still throbbing. We pull up a few other fish such as grenadiers, deep water fish that look only slightly nightmare-ish, as well as a variety of skates.

The Alaska Longline Survey has been conducted annually since 1978 to collect information on sablefish and other groundfish species. A subsample of fish are tagged and released to determine movement patterns and distribution.

Last updated by Alaska Fisheries Science Center on May 03, 2022