Commercial fishermen will be working long hours to catch native salmon. Many of these fishermen and permit holders are likely to be Alaska Native women. 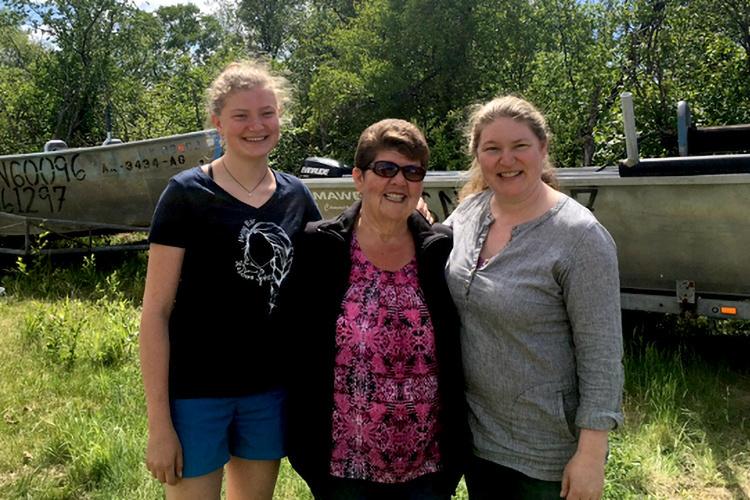 Reflections on What We Saw and Learned

We’re back in Seattle now, but wanted to share a final update on our experiences in Bristol Bay. We’re grateful to so many wonderful people for welcoming us into their homes, telling us their stories and allowing us to have authentic Alaskan experiences!

We collected a total of nine oral histories with women representing a range of ages and life experiences, including one woman in her teens and an elder in her 60s.

Younger respondents talked about learning how to pick fish and be on the beach by themselves while older family members operated skiffs. Older participants highlighted how fishing is a way of life for Alaska Natives that has been passed down for 1,000s of years in Bristol Bay. They talked about their own sense of responsibility for keeping these traditions alive. A couple interviews were conducted with groups of people such as mothers and daughters who both fish. We spoke to three generations of Bristol Bay women who have passed down a legacy of set netting in Naknek. 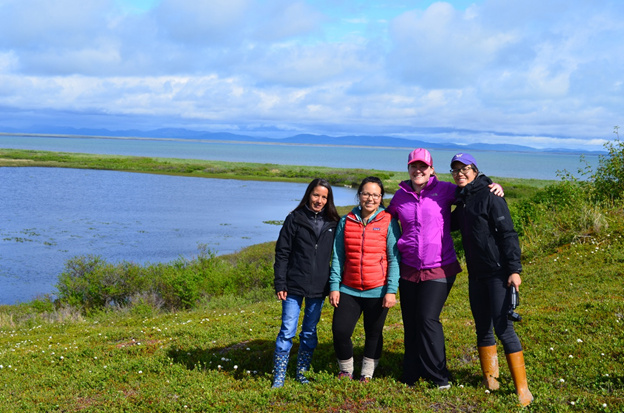 Learning about subsistence plants on the tundra with Leilani Luhrs. From left to right: Anna Santos, Leilani Luhrs, Kim Sparks and Jean Lee in Togiak.

We had countless opportunities to listen, watch and learn – from viewing set net fishing in the Bay to talking with Leilani Luhrs, who captains her own boat and fishes for salmon in Togiak. When Leilani started fishing with her dad, she and her sister were the only young fisherwomen in Togiak Bay. There are around 20 women who commercially fish now in Togiak.

We also witnessed first-hand a few of the challenges faced by rural Western Alaska communities. We experienced temporary water shut-offs while the village performed maintenance on its main water line and flight delays due to inclement weather. None of this, however, took away from the stunning beauty of Togiak or the warmth of the people we met there. 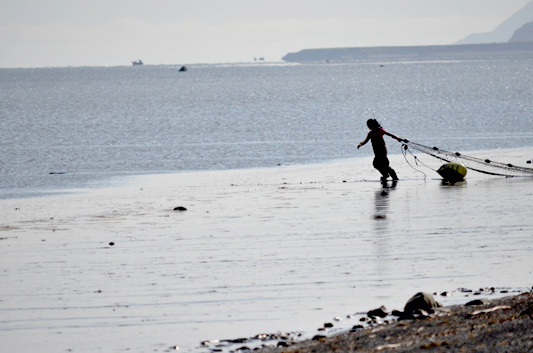 A fisherwoman puts out her set net in Togiak. 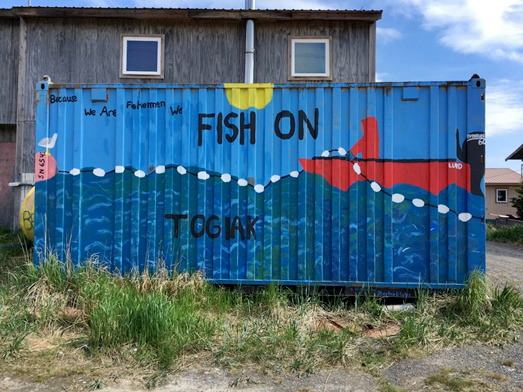 A colorful mural in Togiak. 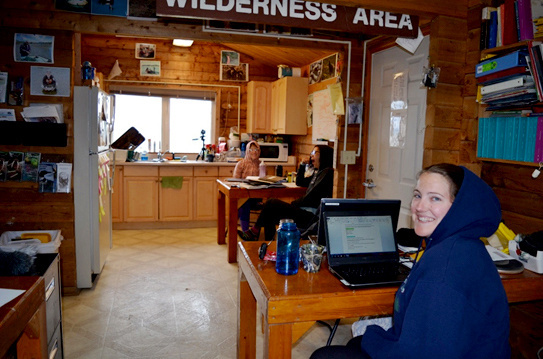 The team working hard in the Togiak US Fish and Wildlife cabin.

We split up for the last week. Half of us returned to Dillingham to wrap things up there. The other half headed to Naknek for four days (we wish we could have stayed longer!). We timed our visit just before the salmon run. Naknek is home to a number of canneries, so it was extremely busy and lively with everyone getting ready for commercial set net and drift fishing. Naknek doubles in population every summer due to an influx of seasonal processing workers and fishermen. 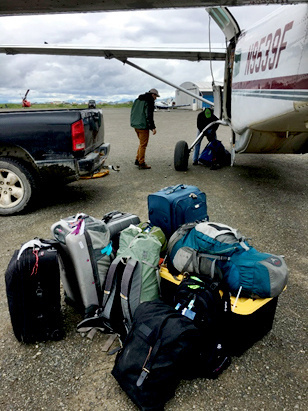 Our pilot: “Are you guys moving or what?” Research requires a lot of gear!

We attended a Blessing of the Fleet potluck, where we ate prepared salmon and made some friends who participated in oral history interviews. Participants told us about their set net sites and cabins on the beach, gave us tours of their fish smokehouses, and even invited us to experience the maqii (Yup’ik steam bath). We also heard about fishing at Graveyard Point, an area roughly 30-40 minutes up the Kvichak River by boat. This area was named for a graveyard that contained the remains of cannery workers; it was exposed and eventually washed away by the river. Participants and their families have fished there for at least 50 years and are continuing the tradition by transferring set net permits to the next generation of women.

Our last days in Dillingham were busy too. King salmon hit the day before we left. On our last day in town, we watched one of our participants go through the steps of putting up fish with family members—from wading through the mud, carefully picking fish out of the net, hauling catch up the beach, and then cleaning, filleting, vacuum-packing, and freezing the fish. 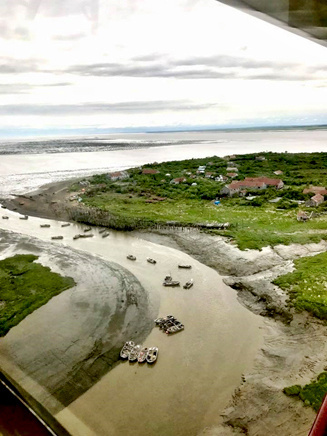 Through this research, we are beginning to understand the integral role that salmon play in Bristol Bay communities and the importance of women’s involvement in the region’s salmon fisheries. In addition to being a sustainable and healthy source of food, salmon hold cultural and spiritual significance to many.

According to some of the people we interviewed, women began set netting as a way to put up salmon from shore while men in the community were drift netting in boats. One respondent joked that women typically didn’t drift net because it would be difficult to care for a large number of children at sea for three weeks. Set netting from shore made it possible to raise families and process fish. Women could teach their children about setting nets, caring for fish and properly filleting fish. This passing on of knowledge and the importance of access to commercial and subsistence resources were reoccurring themes heard over the course of our visit.

We’re learning more about how local communities’ access to resources is affected by environmental change. For example, a few participants spoke of changes they had observed over their lifetimes in the availability of subsistence resources at different times and locations. Several people interviewed talked about how changes in the timing of ice freeze and melt are already affecting human safety, making it difficult to travel to neighboring villages and in some cases resulting in a loss of life. These stories will be critical to assessing a rapidly changing environment.

After being transcribed and edited for clarity, collected oral histories will be publicly accessible via the Voices of the Fishery website. We hope you enjoy listening to them as much as we did!

We will miss Bristol Bay and the people we met there, and are immensely grateful for the generosity of our project participants who shared their time and their stories. We can’t wait to go back! 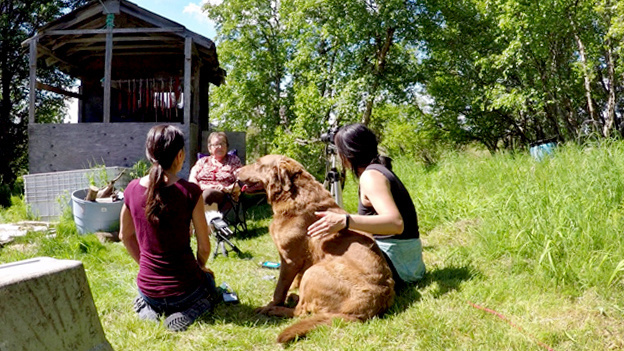 Anna Santos and Jean Lee interview Connie Timmerman, with a special guest appearance from Connie’s dog Maggie. Connie’s smokehouse is in the background.

Special thanks to NOAA Preserve America, Pacific States Marine Fisheries Commission for their funds and support, and to Bristol Bay Native Association for partnering with us on this project. 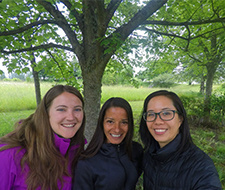 Kim works as a social scientist at Pacific States Marine Fisheries Commission and works as a grantee at the Alaska Fisheries Science Center. Kim has a bachelor's degree in environmental biology from Westmont College and a master’s degree in marine affairs from the University of Washington. She joined AFSC in 2015.

Anna is a social scientist at Pacific States Marine Fisheries Commission and works as a grantee at the Alaska Fisheries Science Center. She has a doctorate in human-environment geography from Texas A&M University, and master's and bachelor's degrees in environmental biology from the University of Massachusetts Boston. She joined AFSC in 2015.

Jean is an analyst for the Alaska Fisheries Information Network and works as a grantee at the Alaska Fisheries Science Center. Jean has a bachelor's degree in anthropology and linguistics, and a master's degree in library and information sciences from the University of Washington. She joined the AFSC's Economic and Social Research Program in 2008.

The Bristol Bay watershed is home one of the largest sockeye salmon runs in the world, which supports the largest sockeye salmon fishery in world. Soon, commercial fishermen will be working long hours to catch as much of this natural and wild resource as possible before the season ends in July. Many of these fishermen and permit holders are likely to be Alaska Native women.

Last updated by Alaska Fisheries Science Center on May 05, 2022