Don’t Put All Your Eggs in One Gravel Bed! 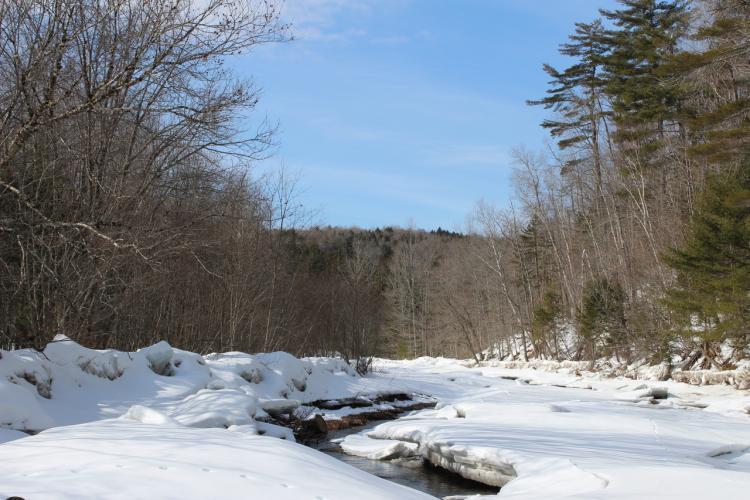 The method has been successful in producing juvenile salmon, but it does take a certain amount of effort. This year, an initial investigation into ice conditions revealed that at least one site needed to be cleared of ice before planting could occur. 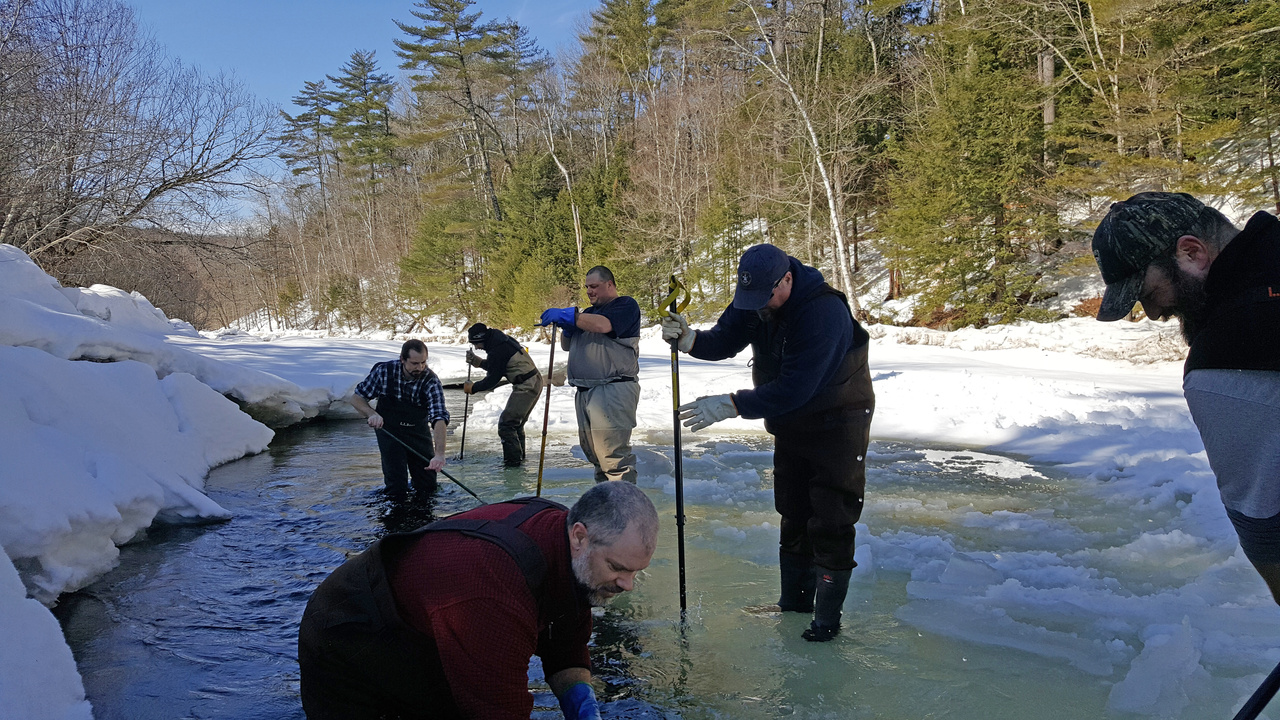 From left to right, Graham Goulette (NEFSC) deposits eggs into a cone while Jeff Murphy (GARFO) readies another cone for Peter Ruksznis (ME-DMR) who is using the water cannon to disperse sediments from the gravel. Photo credit: NOAA Fisheries/NEFSC

The day prior to planting, a robust group of handsome biologists from several agencies snowmobiled into the site to chip away ice and expose the gravely stream bottom.

After a few hours, with the hard work completed, we indulged ourselves with a late lunch of hot dogs cooked over a trail-side fire and enjoyed the camaraderie of discussing how great egg-planting would be the next day. 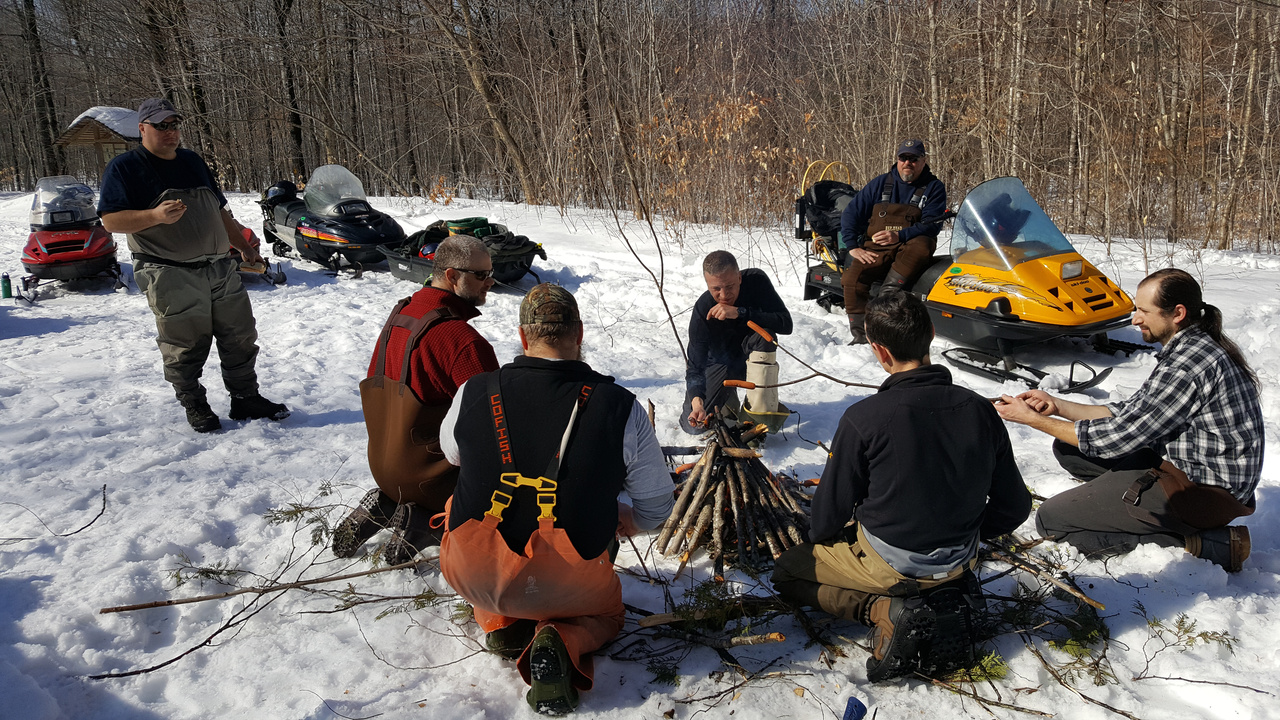 The following day, we met at the Maine Department of Marine Resources office to pick up the gear and eggs left by the U.S. Fish and Wildlife Service. We loaded all the gear into the trucks and drove the hour and a half to our parking area near the Pleasant River. We then loaded all the gear onto our snowmobiles. We rode several miles on winding trails to get to our remote site. We had some minor sled issues, but we made it! Once on site, with arms akimbo we surveyed the river, realizing the water was too high for planting. Melting snowpack within the drainage had raised the river level higher than the depth of our planting cones. So we headed to another site further downstream where the water level wasn’t so high. 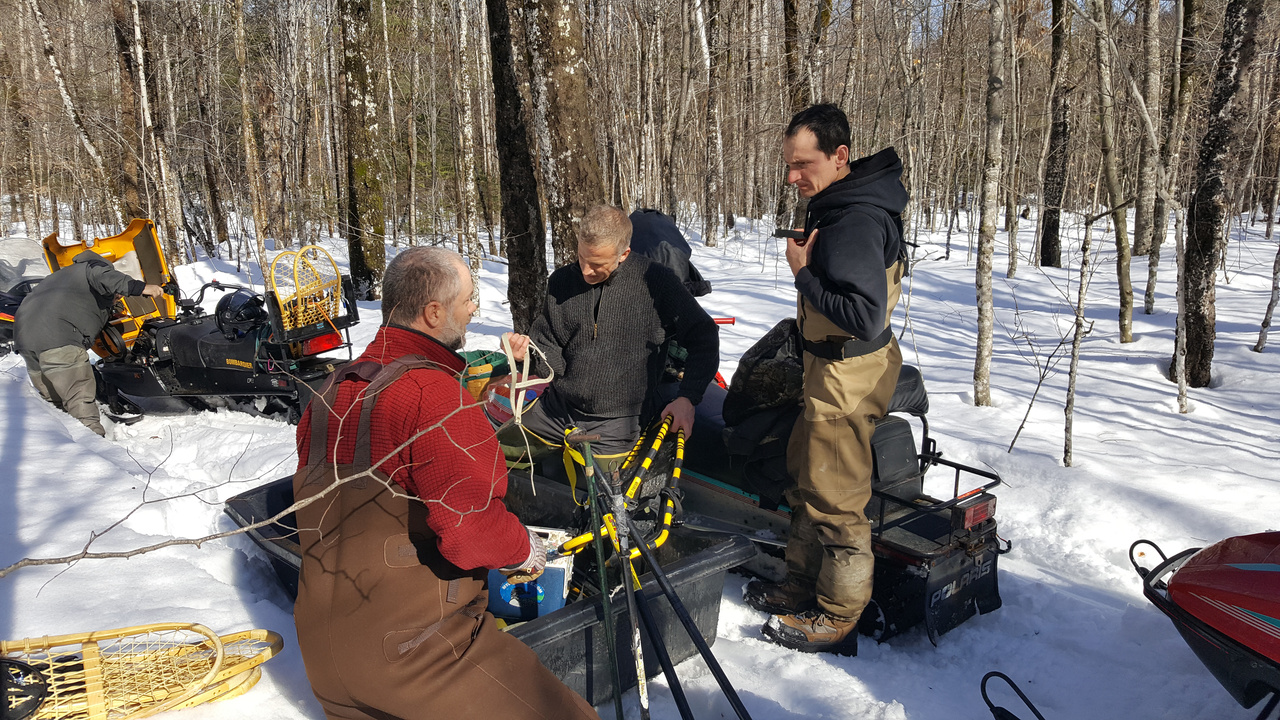 Donning snowshoes, we hauled our gear in a pull sled down a steep embankment to the river and out onto the ice. More than one biologist may have fallen during this trek, but none were seriously hurt. Once on site, we got to work assembling the planting gear and preparing for planting. 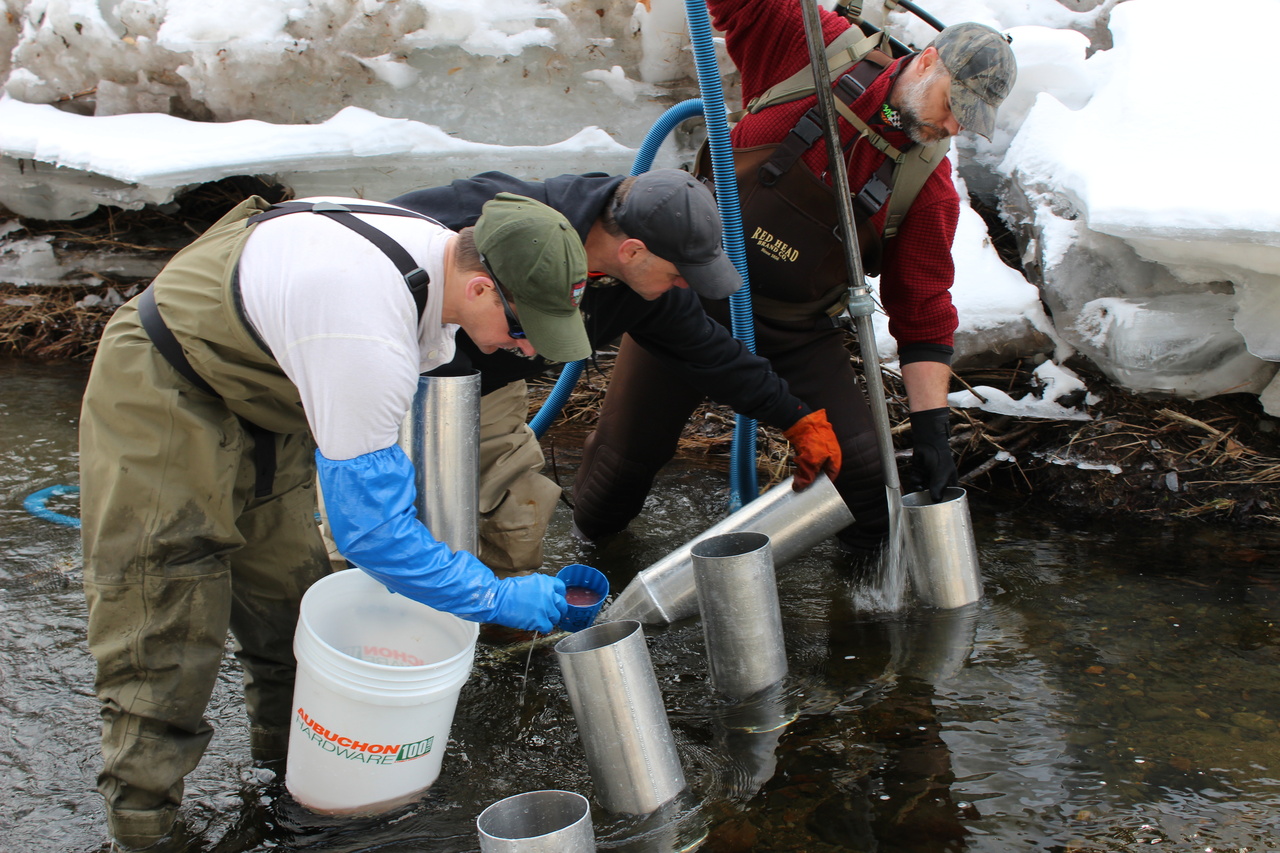 From left to right, Graham Goulette (NEFSC) deposits eggs into a cone while Jeff Murphy (GARFO) readies another cone for Peter Ruksznis (ME-DMR) who is using the water cannon to disperse sediments from the gravel. Photo credit: NOAA Fisheries/NEFSC

To plant, one crew member operates a water cannon through an aluminum cone sending a jet of water into the gravely river/stream bottom that blasts fine sediments away to create more space in between individual pieces of gravel for the eggs to occupy. Another crew member deposits 400 to 800 eggs into each cone. After the eggs sink to the bottom – below the surface of the substrate – another crew member slowly pulls the cone up from the gravely river bottom, causing water suction to fill the spaces with eggs. This method mimics the natural process used by adult Atlantic salmon. 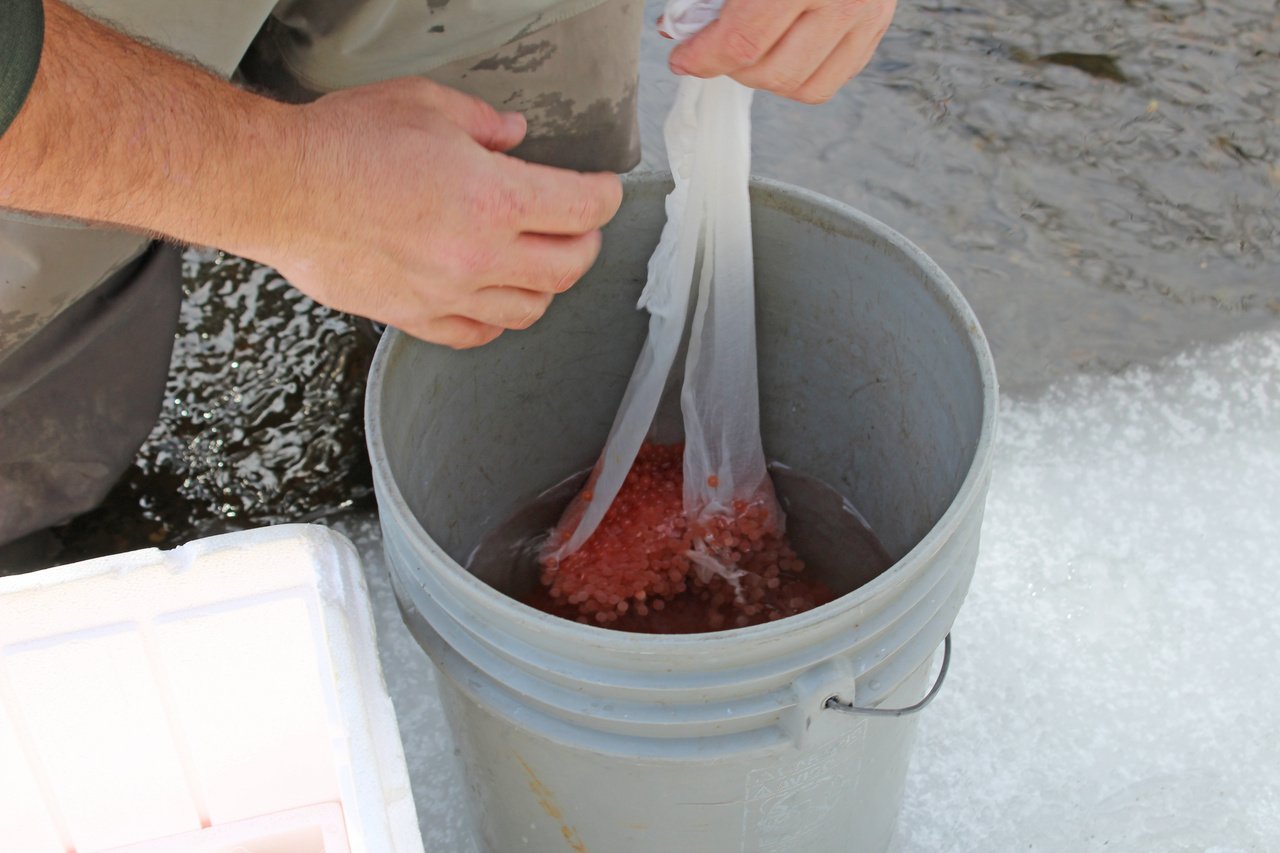 Jason Valliere (ME-DMR) prepares salmon eggs for planting by removing them from the insulated cooler and placing them into a bucket filled with river water. Photo credit: NOAA Fisheries/NEFSC

At one point during the planting we noticed a small predator of Atlantic salmon eggs – a slimy sculpin. With my catlike reflexes, I was able to scoop the little fella up barehanded and relocate him to a place away from the planting. Not on my watch, sucker – I mean, sculpin! 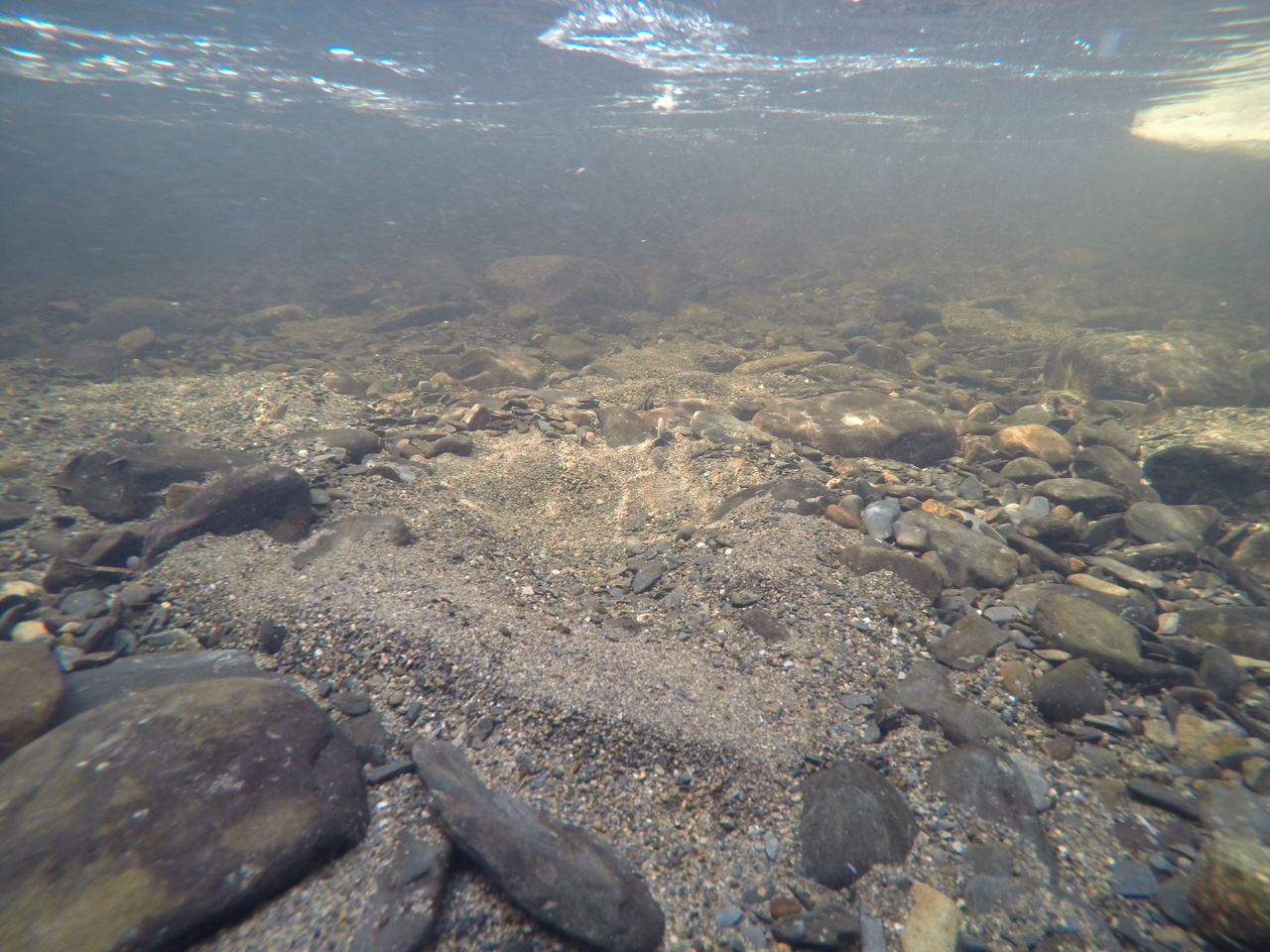 “Nest” like depression in the gravel substrate after eggs have been planted and the cone removed. Fine sediments have been forced from the substrate to a depth of 8 – 10 inches creating more space between gravel bits for the eggs. Photo credit: NOAA Fisheries/NEFSC

Working like a well-oiled machine, we planted about 120,000 eggs in a couple hours! These eggs will hatch within a few weeks and remain in the gravel habitat as sac fry for another few weeks before emerging and feeding. Over the next couple weeks more than one million eggs will be planted in multiple rivers and streams. We hope many will survive the next couple years in the rivers, growing to a length of about 6 to 8 inches, before heading to the ocean to become big, beautiful adult salmon. 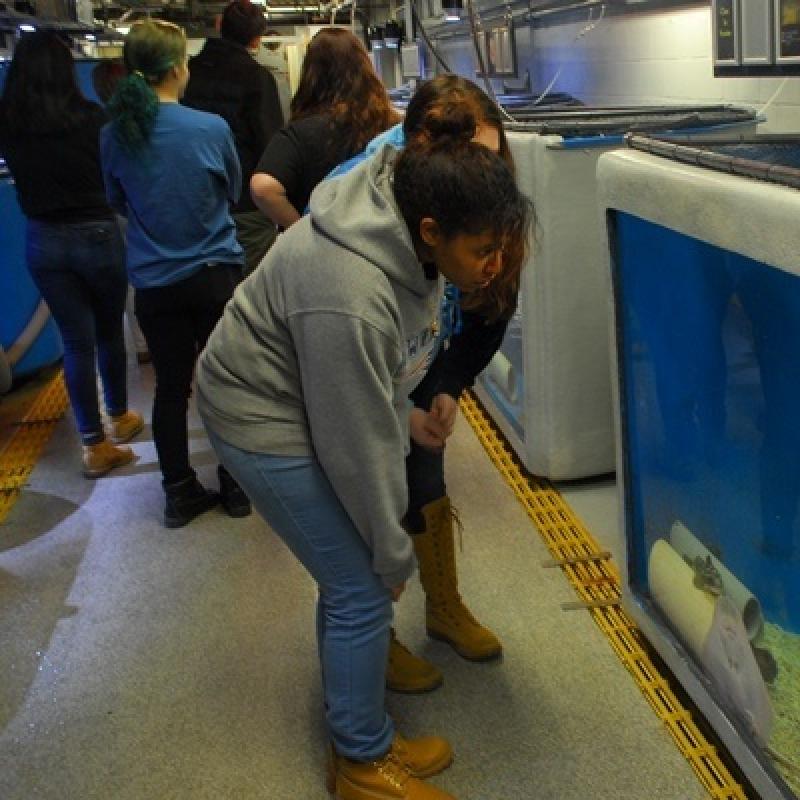 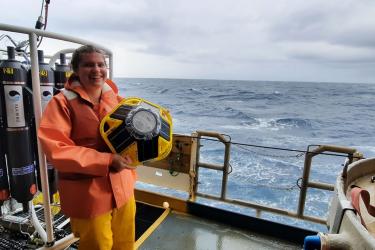 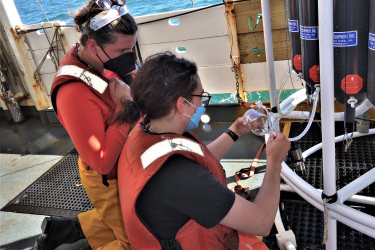 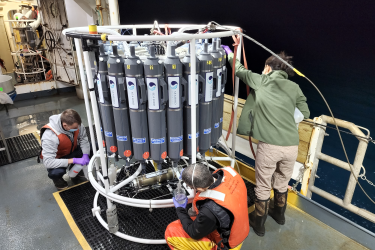