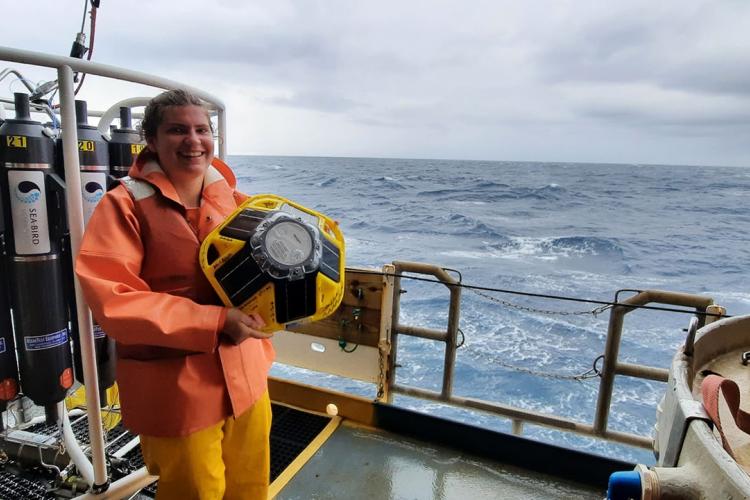 Catrina Nowakowski prepares to launch her buoy from the deck of the NOAA Ship Henry Bigelow. Credit: NOAA Fisheries/Jerry Prezioso

It’s now been more than a week since the NOAA Ship Henry Bigelow sailed from Newport, Rhode Island, to kick off the 2022 spring Ecosystem Monitoring Survey. In that time the vessel has covered a lot of ground, going as far south as Virginia by June 5, while sampling offshore stations. From there we moved inshore just in time to miss a large weather front.

Working our way back north along an inshore track of stations in the mid-Atlantic Bight, we finished sampling the southern New England area. Then we sailed on to the southwest corner of Georges Bank.

On June 8 Catrina Nowakowski, a student from the URI Graduate School of Oceanography, launched a drifter buoy from Lydonia Canyon on the outer edge of the bank. It’s powered by solar panels and equipped with sensors to measure wave height, period, and direction. The buoy transmits daily updates relayed through a satellite link to a shore station. Tracking its progress, we’ve learned that the buoy is moving northeast along the outer edge of Georges Bank.

Another large storm front prompted a plan from our commanding officer to move inshore again, away from unworkable conditions forecast for Georges Bank. We moved into the western Gulf of Maine instead. We used the time to keep sampling inshore stations as the Bigelow made its way toward the Bay of Fundy, which we reached the morning of June 11.

When the large storm system that had pinned us down for so long dissipated, we moved into the offshore waters of the Gulf of Maine. That’s where we are as I write this on Sunday morning.

Our plankton catches have certainly varied over the course of this voyage. There were low volume catches down south and higher volumes in the north, with larger amounts of pinkish-tinged Calanus copepods here in the Gulf of Maine. We did frequently find the pteropods (tiny sea snails) we were seeking in the mid-Atlantic Bight area, and almost none in northern waters. Not much has appeared in the way of gelatinous zooplankton anywhere in the surveyed area, and no algae blooms have clogged our nets—much to the relief of all the staff who have to hose down the nets to collect samples!

Our water sampling array has worked flawlessly on its maiden voyage. We’ve been able to collect water samples for all research conducted by our onboard scientists. And the decorated Styrofoam cups from the Cranston West High School students are still in their mesh bag on the water sampler. They’re now a fraction of their former size!

Our current plan is to finish sampling the Gulf of Maine and Georges Bank areas, then to visit a few more stations off Southern New England. With a very favorable forecast for us it looks like we should be able to achieve all our goals before returning to Newport on Friday, June 17.