The NOAA Ship Oscar Elton Sette is departing on May 15th for a 27-day research expedition throughout the Hawaiian Islands to support research and recovery of the endangered Hawaiian monk seal and threatened green sea turtle. We will follow their progress and provide updates in these notes from the field. 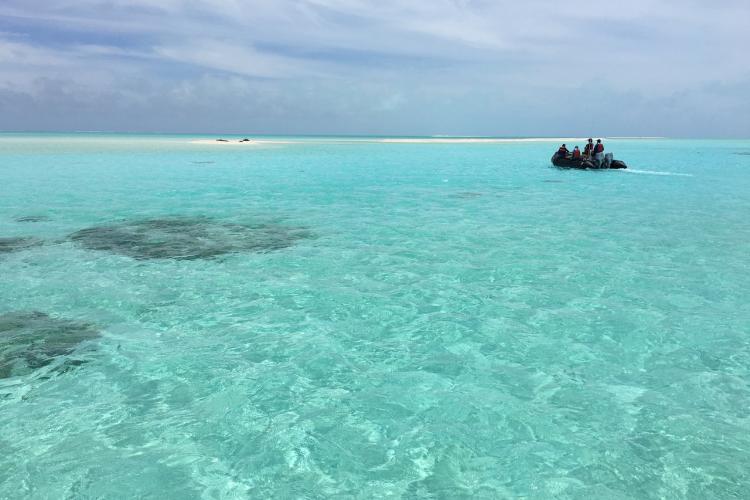 Over the next 4 months, these field teams will measure and tag all weaned seal pups, identify all individuals, conduct beach counts of seals, remove marine debris, and conduct additional scientific and recovery efforts to protect the Hawaiian monk seal population. A team of biologists at French Frigate Shoals will also monitor sea turtle nesting activities, assess nesting and hatching success, and measure and tag basking and nesting turtles. 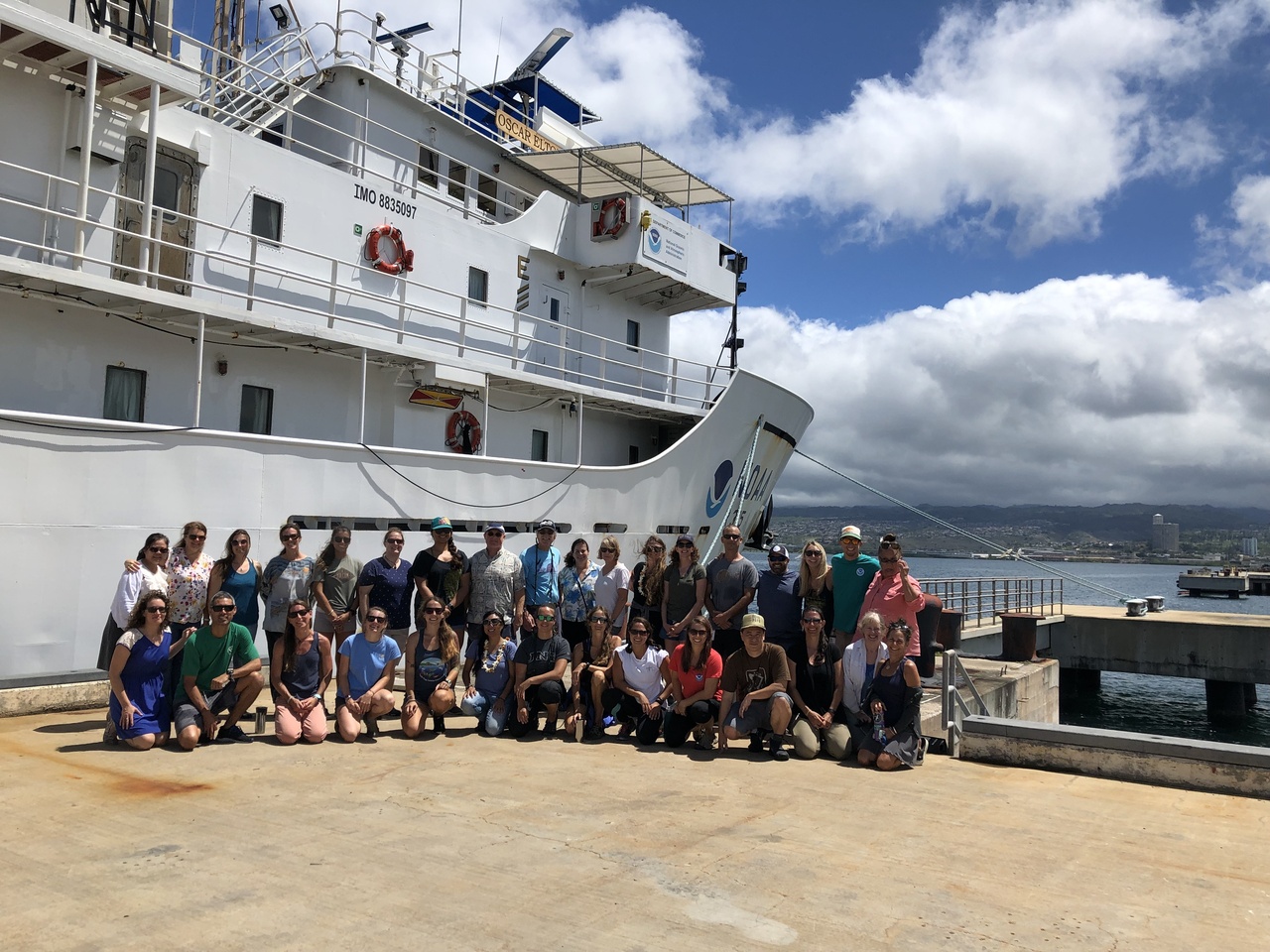 The science party for the Northwestern Hawaiian Islands field camp deployment cruise of 2019.

The science party prepares to disembark from Ford Island in Honolulu. The team consists of field camp researchers, members of partner organizations, and scientists from the Pacific Islands Fisheries Science Center. Such a large effort requires help from many hands and every team member is essential.

It Takes an Army 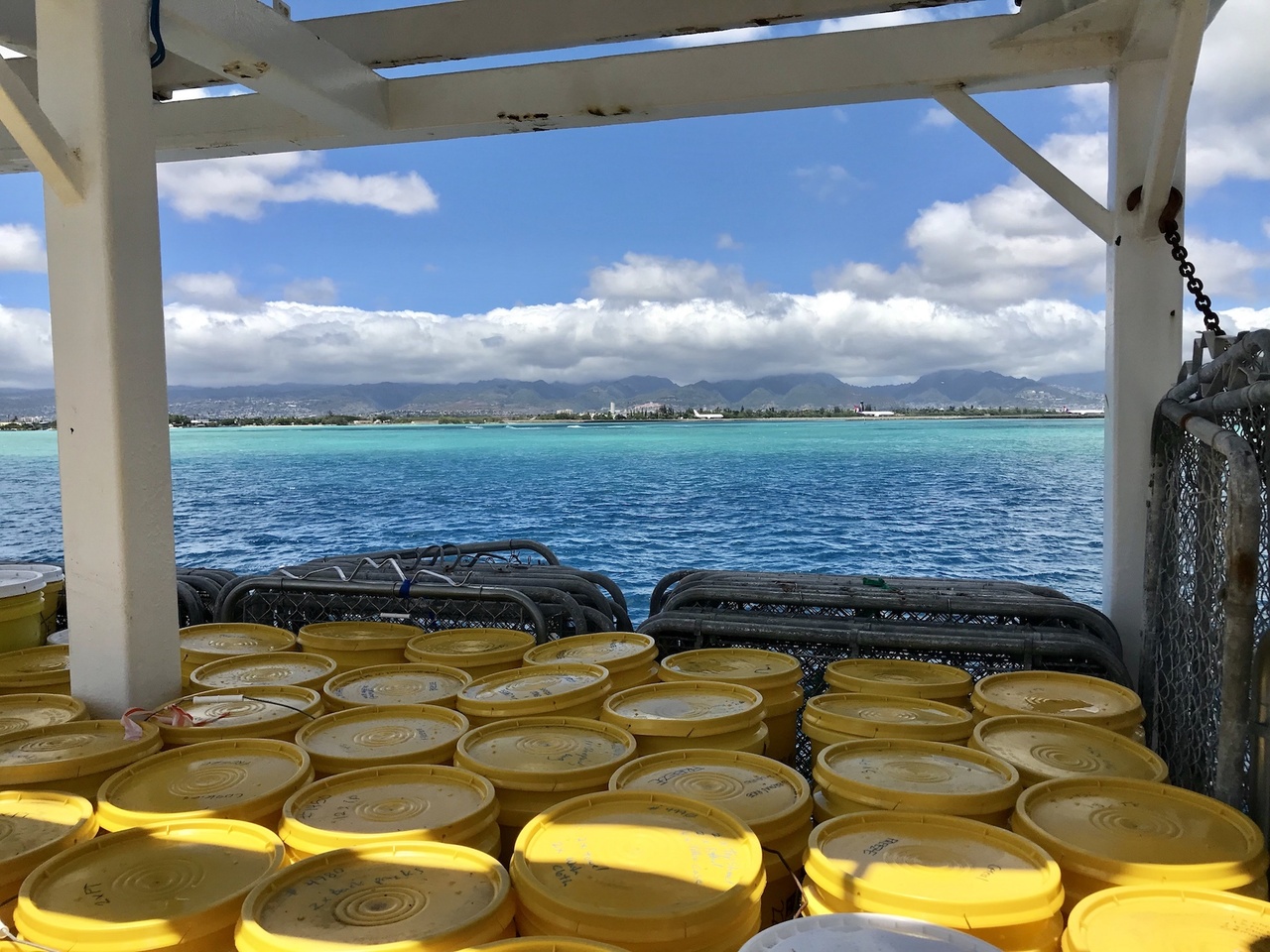 This is just a small sample of the hundreds of buckets of food, supplies, water, and medical equipment that we will be staging on several of the Northwestern Hawaiian Islands for the three month long summer field camps.

It takes an army of people and 5-gallon buckets to establish monk seal and sea turtle camps on the remote Northwestern Hawaiian Islands. This is just a small sample of the hundreds of buckets of food, supplies, water, and medical equipment that we need for the 4-month-long summer field camps. 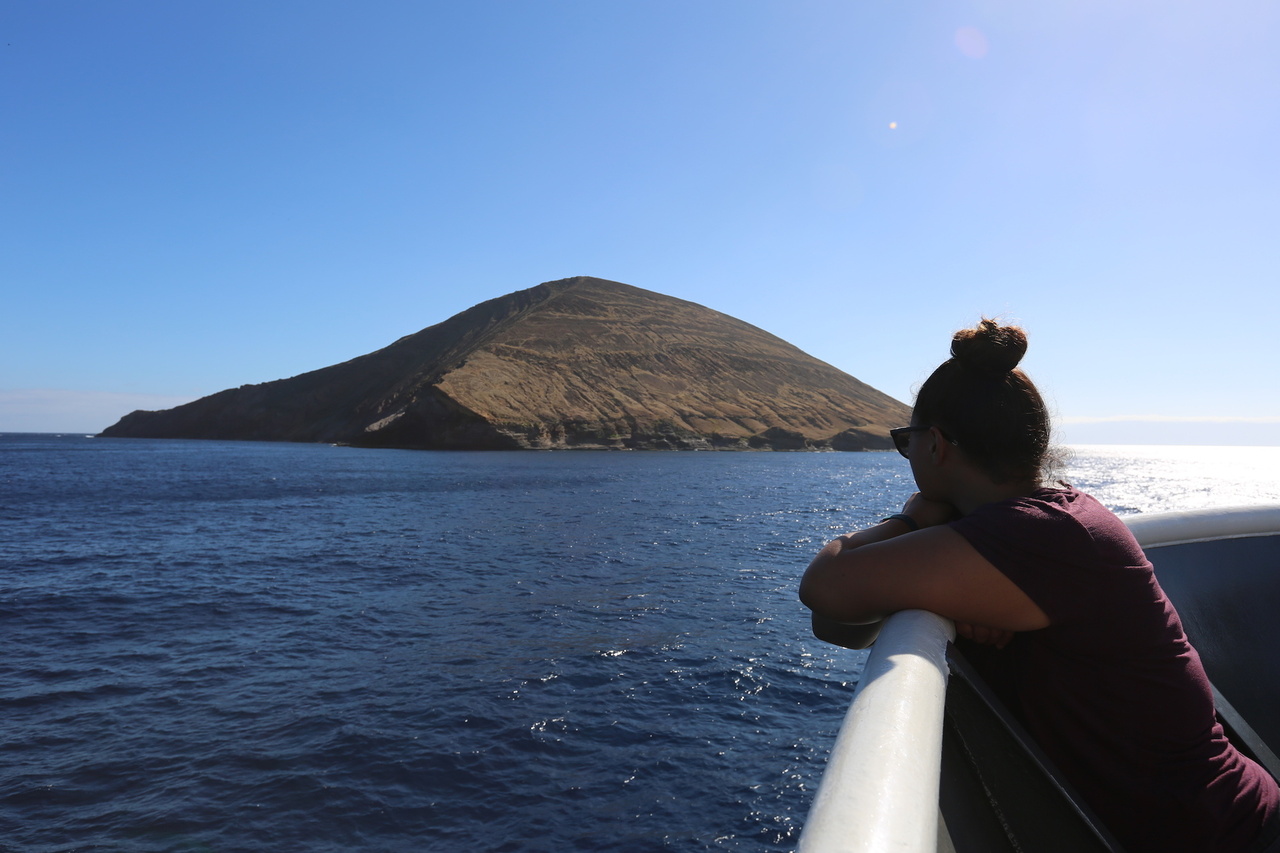 Jenny Crawford from NOAA's Office of National Marine Sanctuaries looks toward the ancient cinder cone island of Lehua, which is part of the extinct Niʻihau volcano. Teams survey Niʻihau and Lehua Islands for monk seals before transiting into the Papahānaumokuākea National Marine Monument. 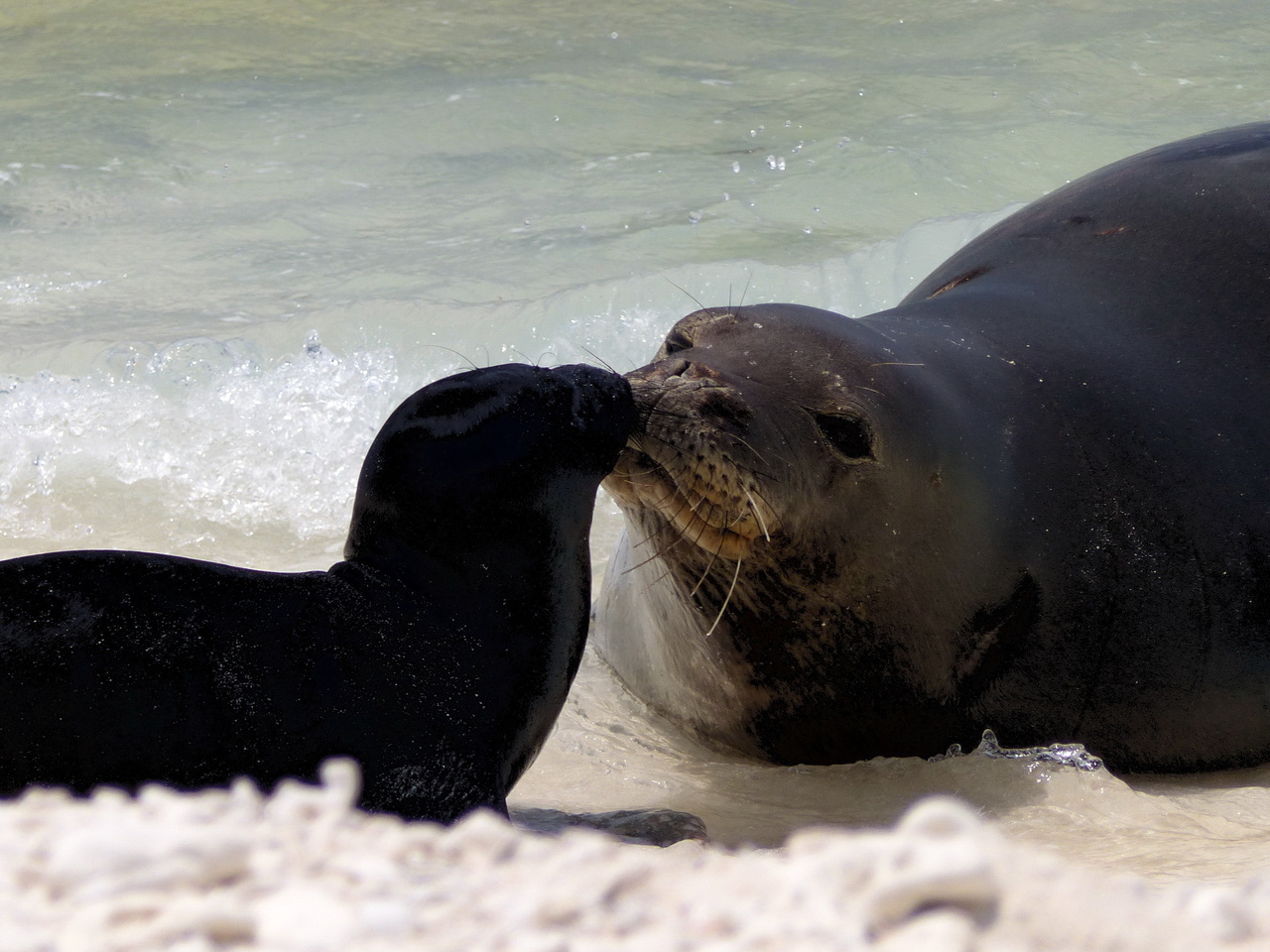 Rare sighting of a 5-year-old female Hawaiian monk seal with a pup on Laysan Island.

The Hawaiian monk seal was listed as Endangered under the U.S. Endangered Species Act in 1976 after a prolonged decline in abundance of seals. Research initiatives are vital to identifying obstacles to the survival of the species and to respond with appropriate science-based conservation measures. Yesterday, the team completed a successful survey at Niʻihau and Lehua, with assistance from the local community. They counted 52 Hawaiian monk seals, including 1 mom and pup pair and 1 weaned pup. These valuable data will be used for the conservation of this rare and endangered species. 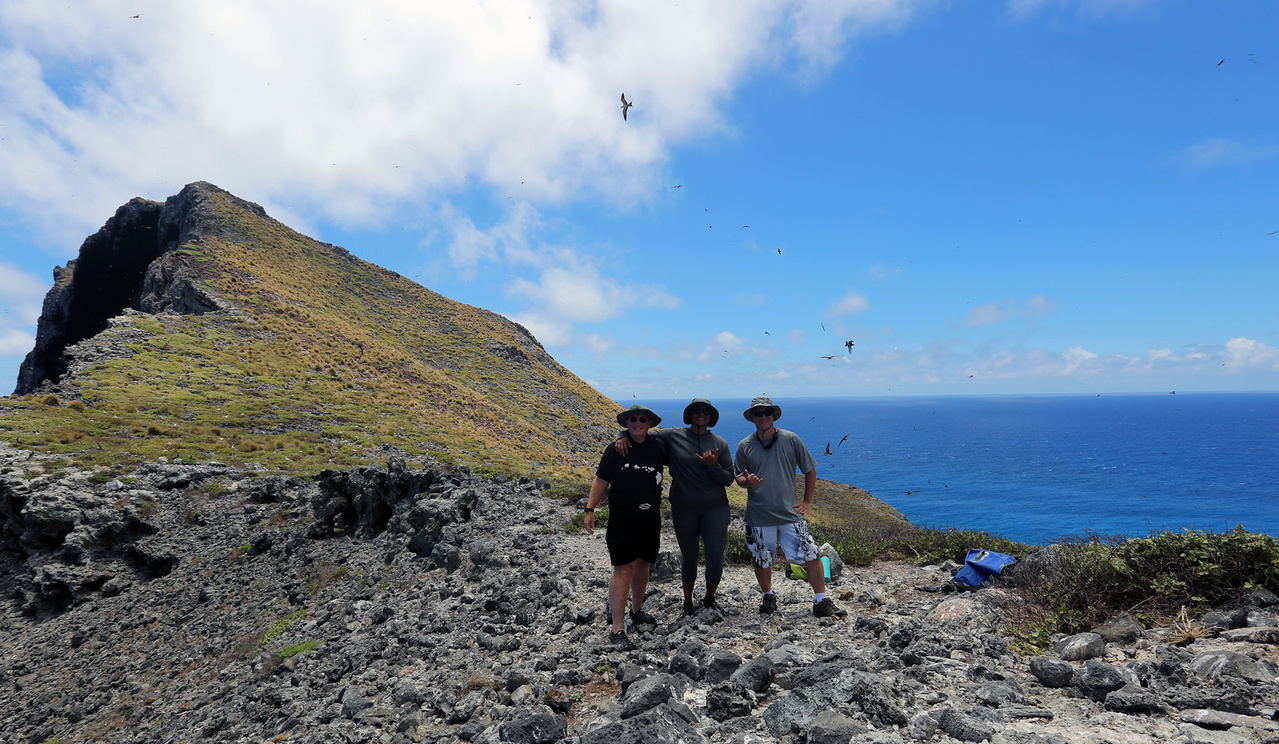 Dr. Kekuewa Kikiloi (far right) leads a team to the interior of Nihoa Island to survey for Cenchrus echinatus, an invasive grass that researchers have been trying to eradicate for decades. As with most invasive species, the grass out-competes native plants and can drastically alter the habitat, which can have lasting impacts on other organisms living there. The team was pleased to find no evidence of the plant during their survey. 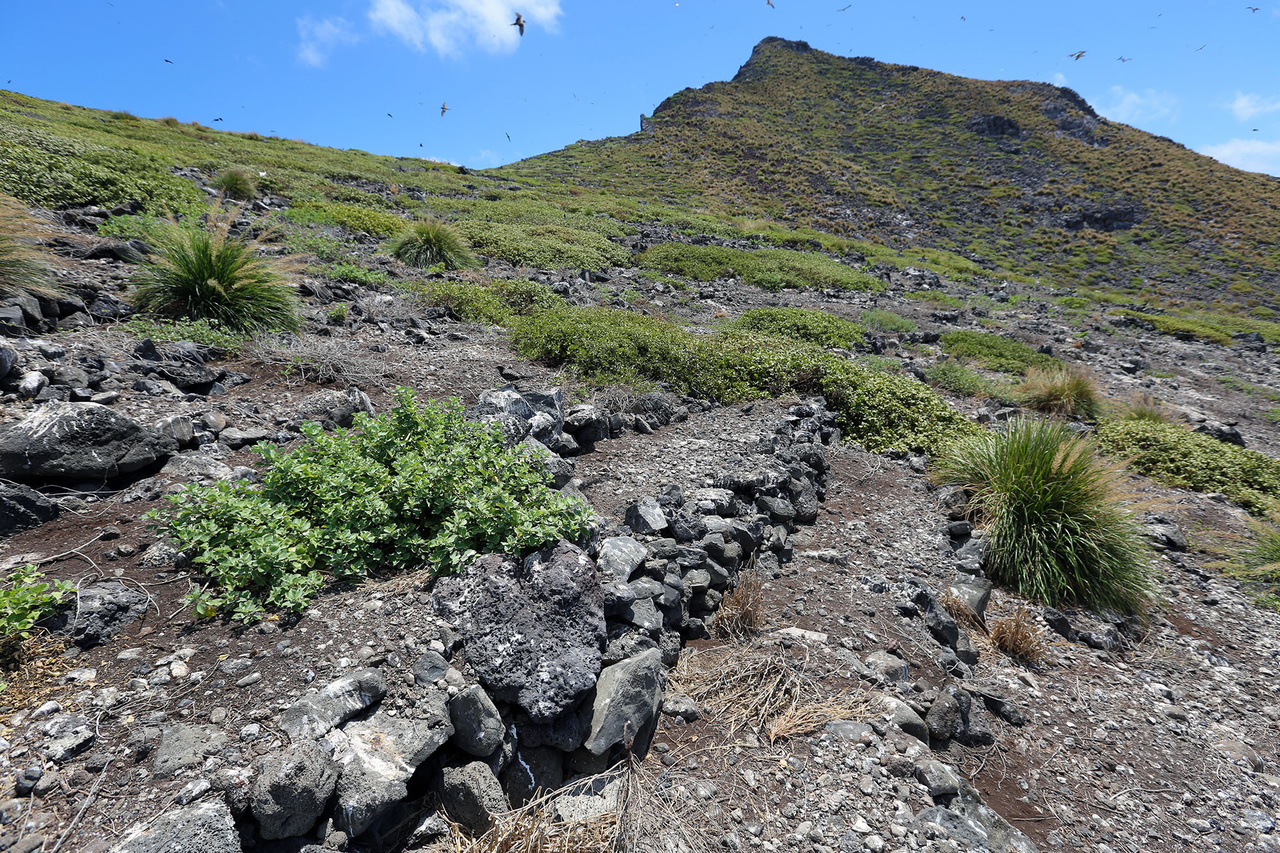 One of many cultural sites on the island of Nihoa where Native Hawaiians lived and worked the land for hundreds of years. This is an ancient house site on the island.

The team also visited some of the many cultural sites on the island, including this ancient house site. Native Hawaiians lived and worked this land for hundreds of years. There are over 88 known ceremonial, residential, and agricultural sites on Nihoa Island. Understanding and respecting the cultural importance of the Northwestern Hawaiian Islands is one of the pillars of our mission. 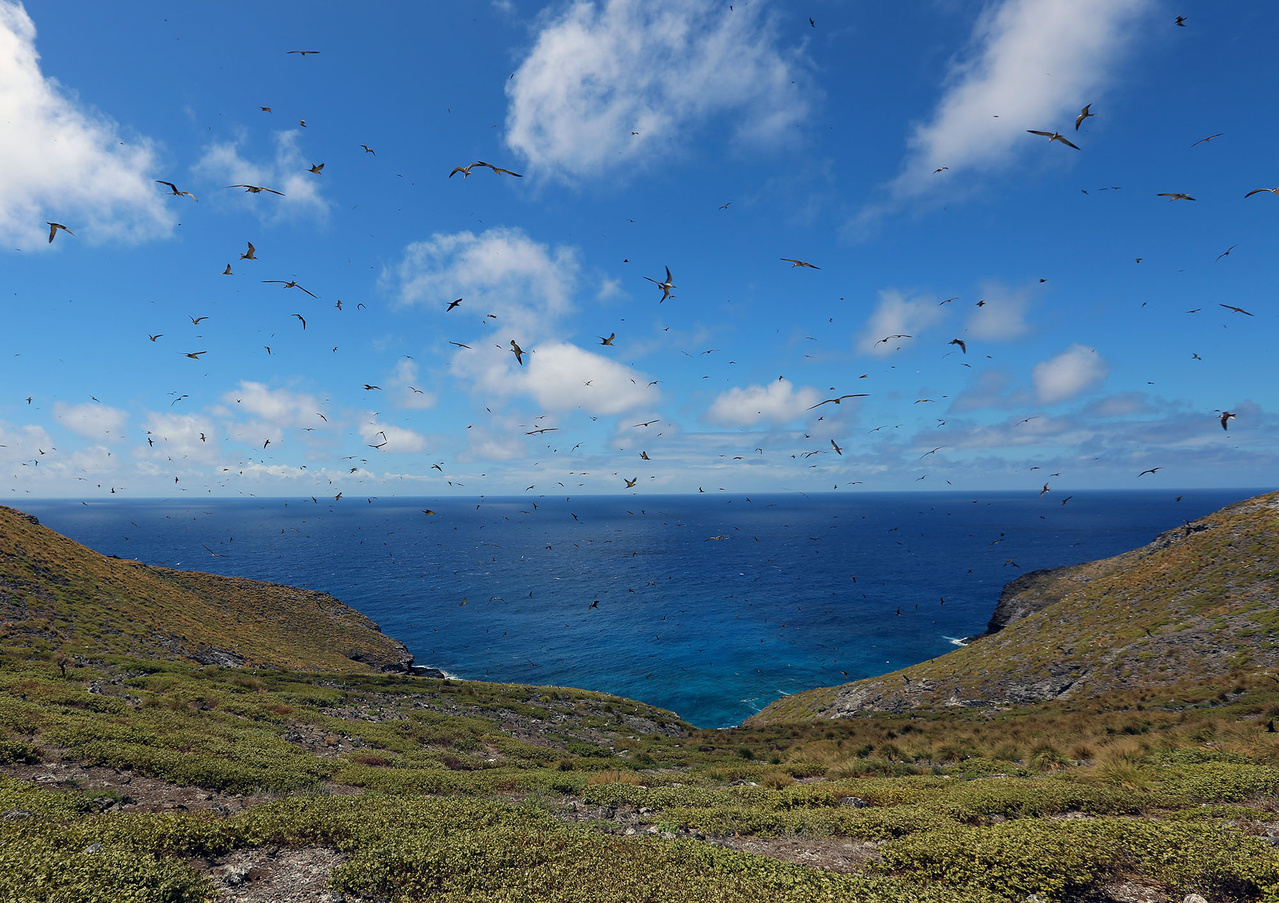 There are so many seabirds clouding the sky on Nihoa, the noise is almost deafening.

Ke ala nui polohiwa a Kāne 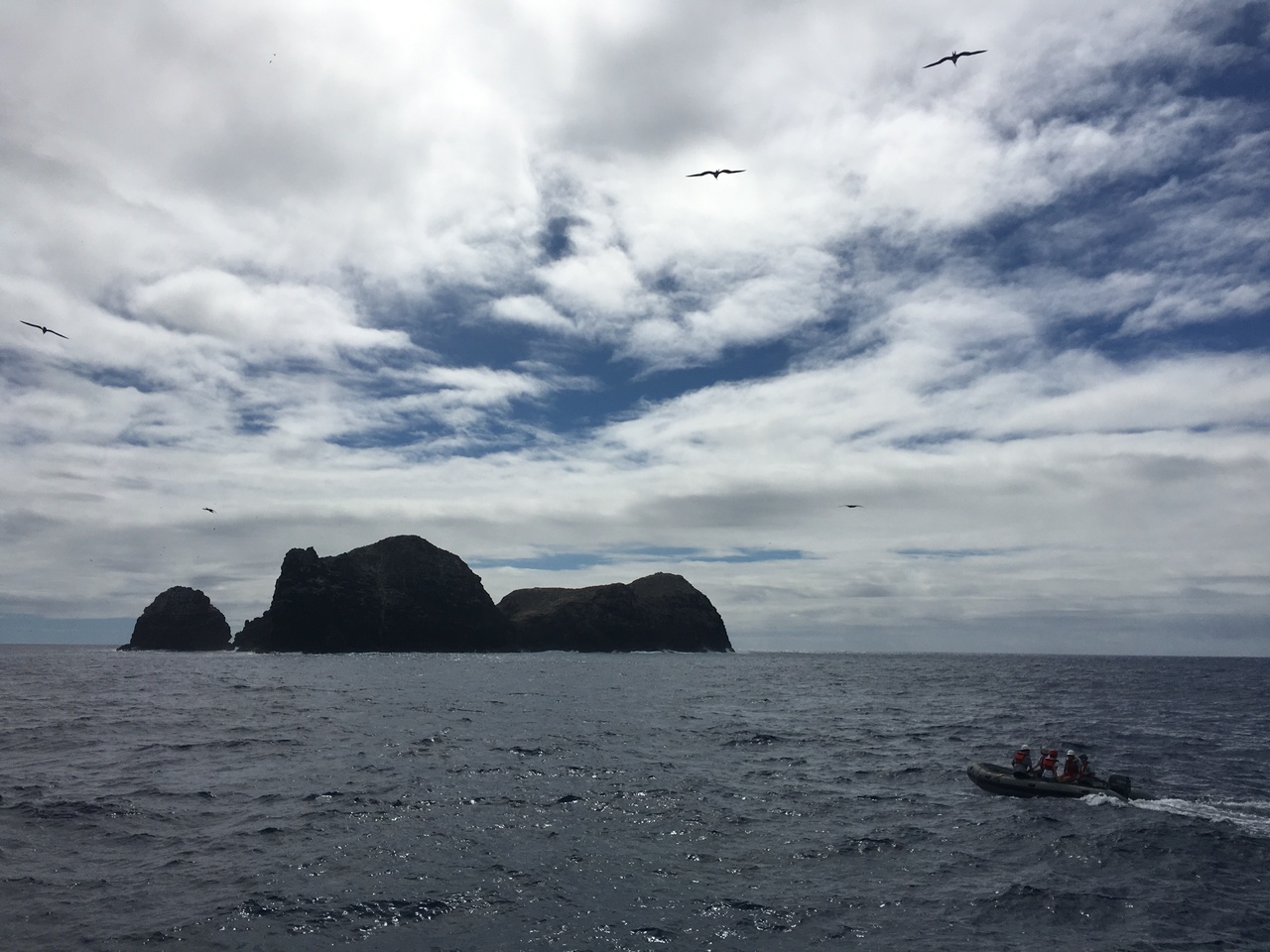 The mixed swells at Mokumanamana prevented the team from landing ashore today. This island is notorious for its jagged coastline. A rocky outcrop with no fresh water or trees, Mokumanamana was an important religious site for ancient Hawaiians and has numerous heiau (shrines) across the island’s central ridge. It lies directly on the Tropic of Cancer, known as “Ke ala nui polohiwa a Kāne” or “The Dark Shining Path of Kāne.” The island is thought to be the origin point for mankind and possibly a gateway to the afterlife. Its rocky shores are also habitat for Hawaiian monk seals and sea turtles. 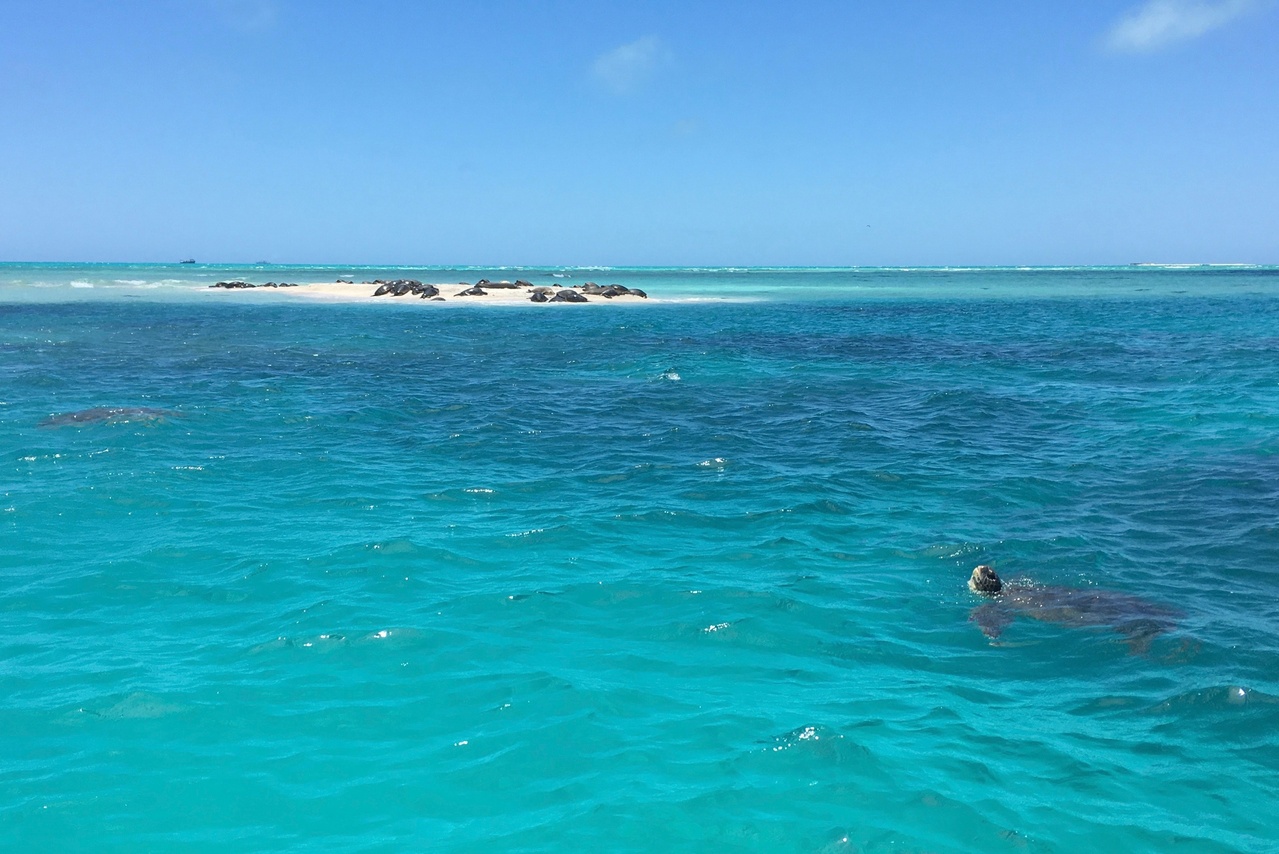 Green sea turtle surfacing in the water near the remains of Trig Island.

Sea turtles and monk seals hauled out on Trig Island, French Frigate Shoals. Trig Island was an important Hawaiian monk seal pupping and green sea turtle nesting location, and went awash at the end of 2018. Pictured is the portion that remains for monk seals and green turtle activities this season. 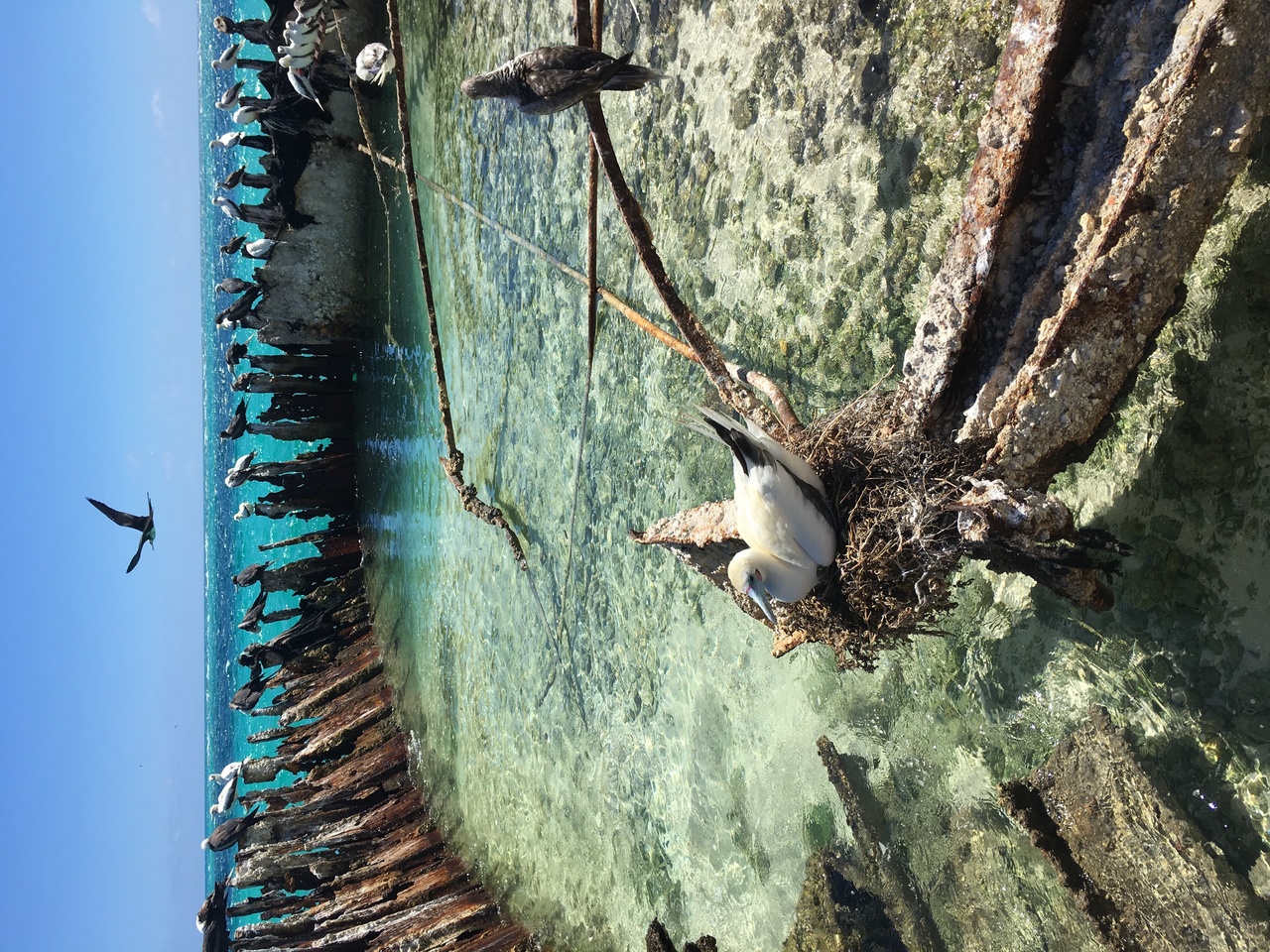 Tern island is a tiny coral island that was once used as a World War II runway and a Fish and Wildlife Service research station in French Frigate Shoals. Now, it is dominated by 18 species of seabirds that call it home, including the sooty tern, red-footed booby, and laysan albatross. Sooty terns are the most abundant seabird here and around 100,000 of them breed on the island. 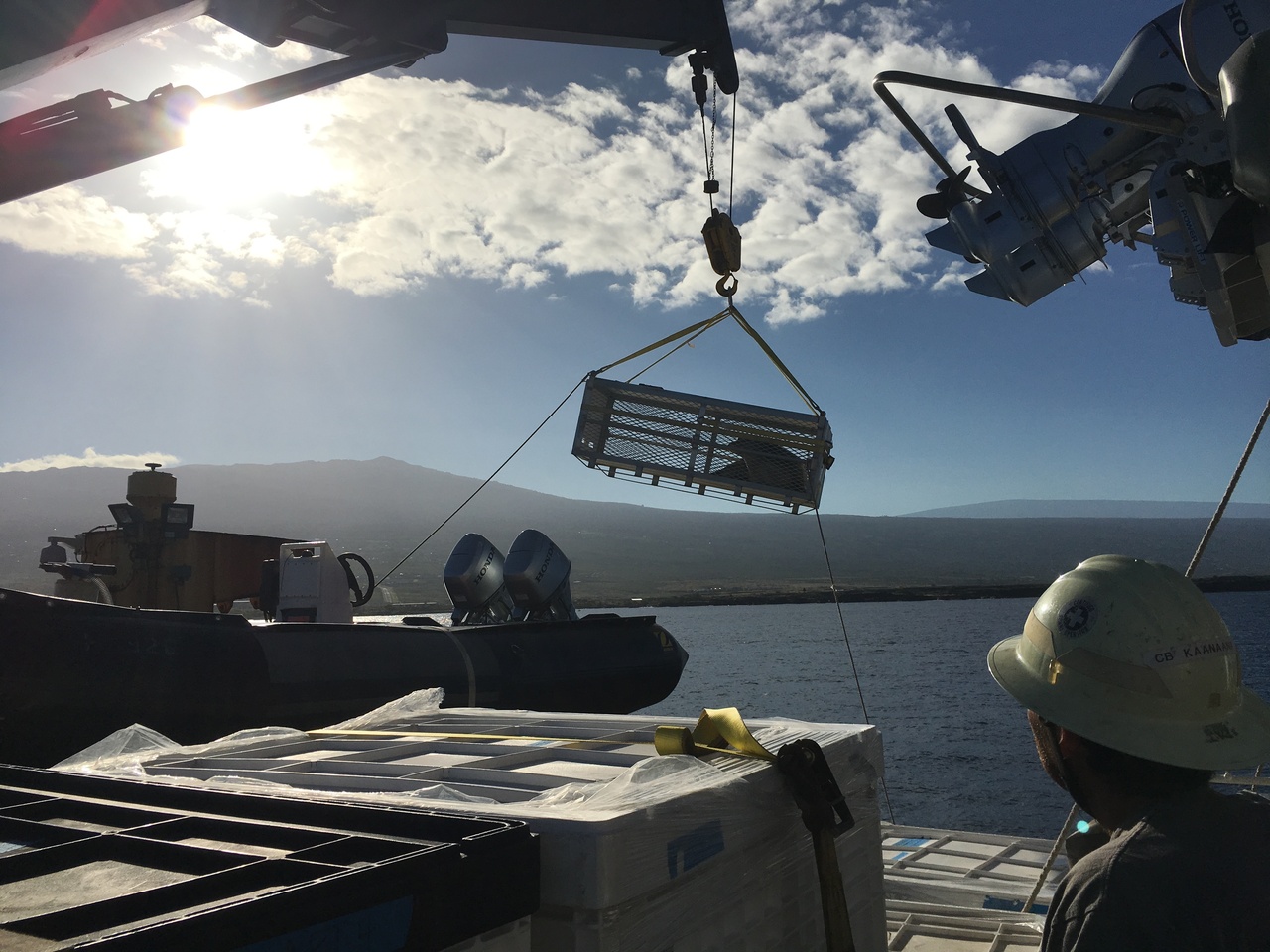 We brought two monk seals onboard the Sette today, just offshore of the Big Island of Hawai'i. Last year on Laysan, we found these weaned pups malnourished and in need of care. The Ke Kai Ola monk seal hospital rehabilitated them in Kona, and we are now transporting them to Laysan for release. The crew onboard is prepared to conduct 24-hour observation and care of the monk seals to make sure their trip back home is as comfortable as possible. 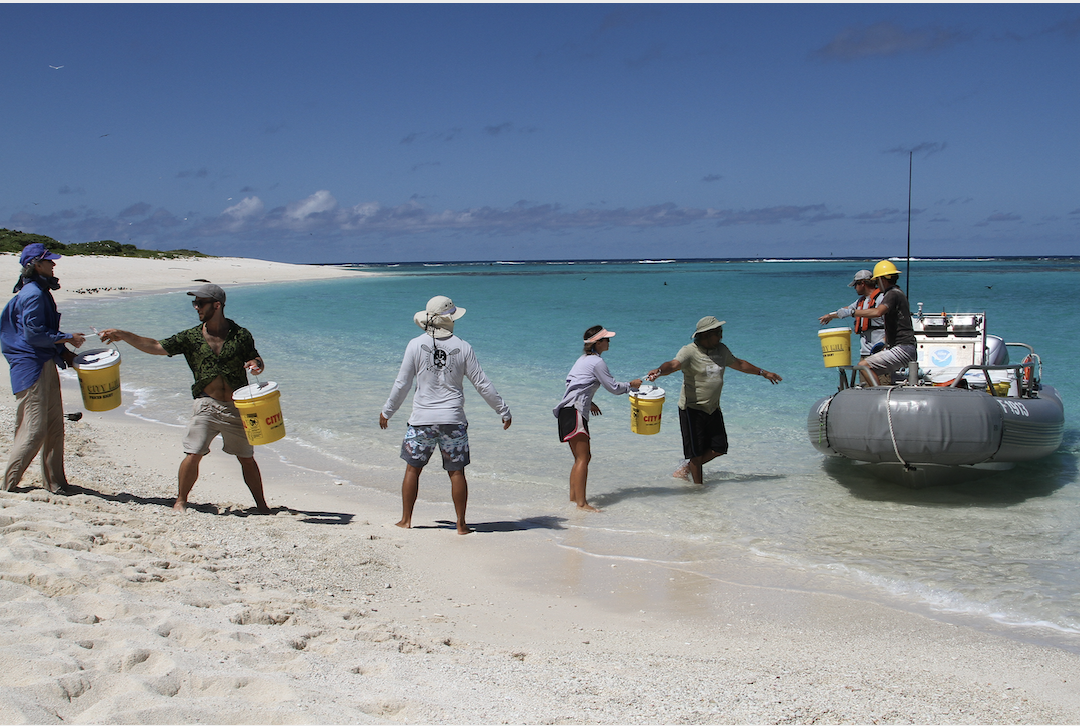 It takes many hands, and a lot of gear, to set up a field camp on a remote island. Most food, clothing and other essentials are carried ashore in 5-gallon buckets. The entire crew has to pitch in to get everything ashore and set up. 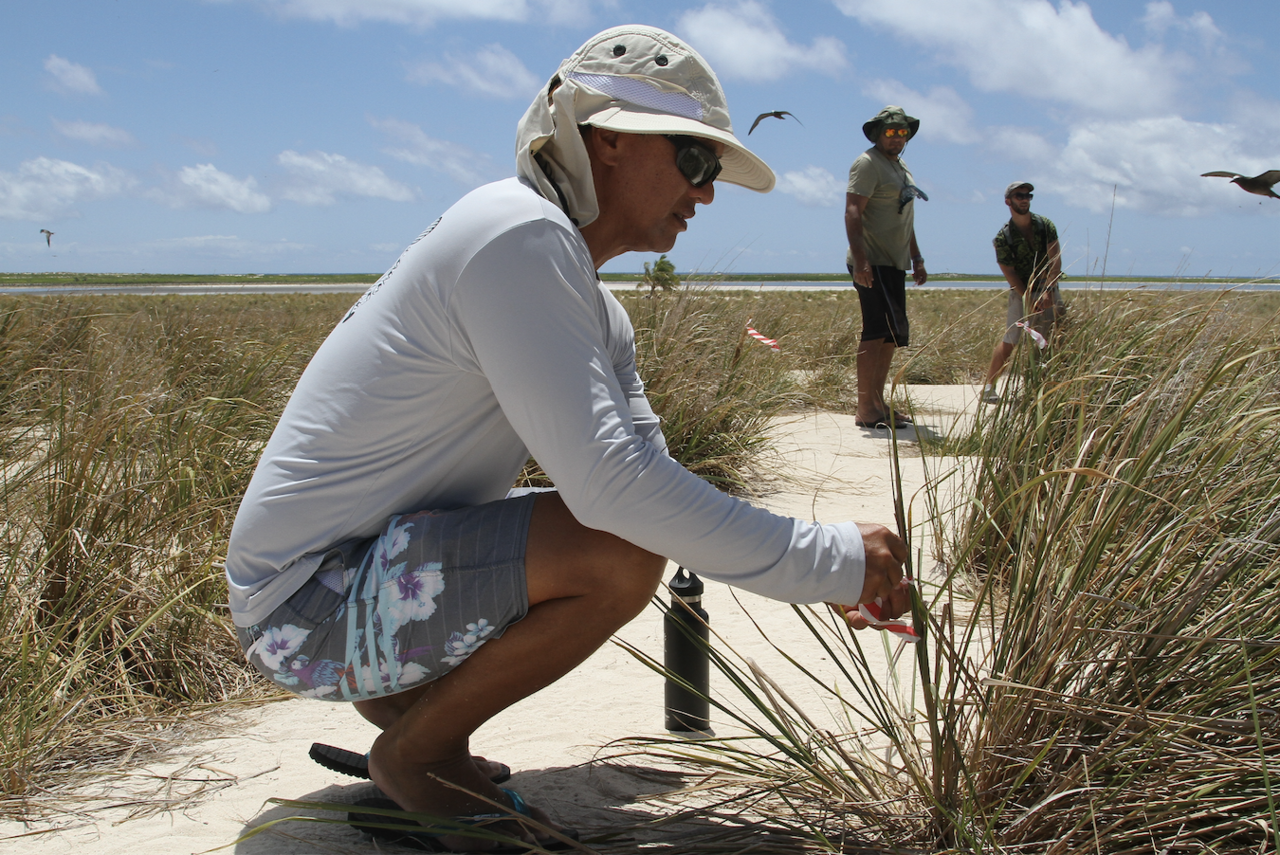 Ekolu Lindsey, from the Office of Hawaiian Affairs, carefully marks a trail into the interior of Laysan Island. Many bird species on the island nest in the ground, so scouting out a trail that minimizes disturbance to their nests is essential. 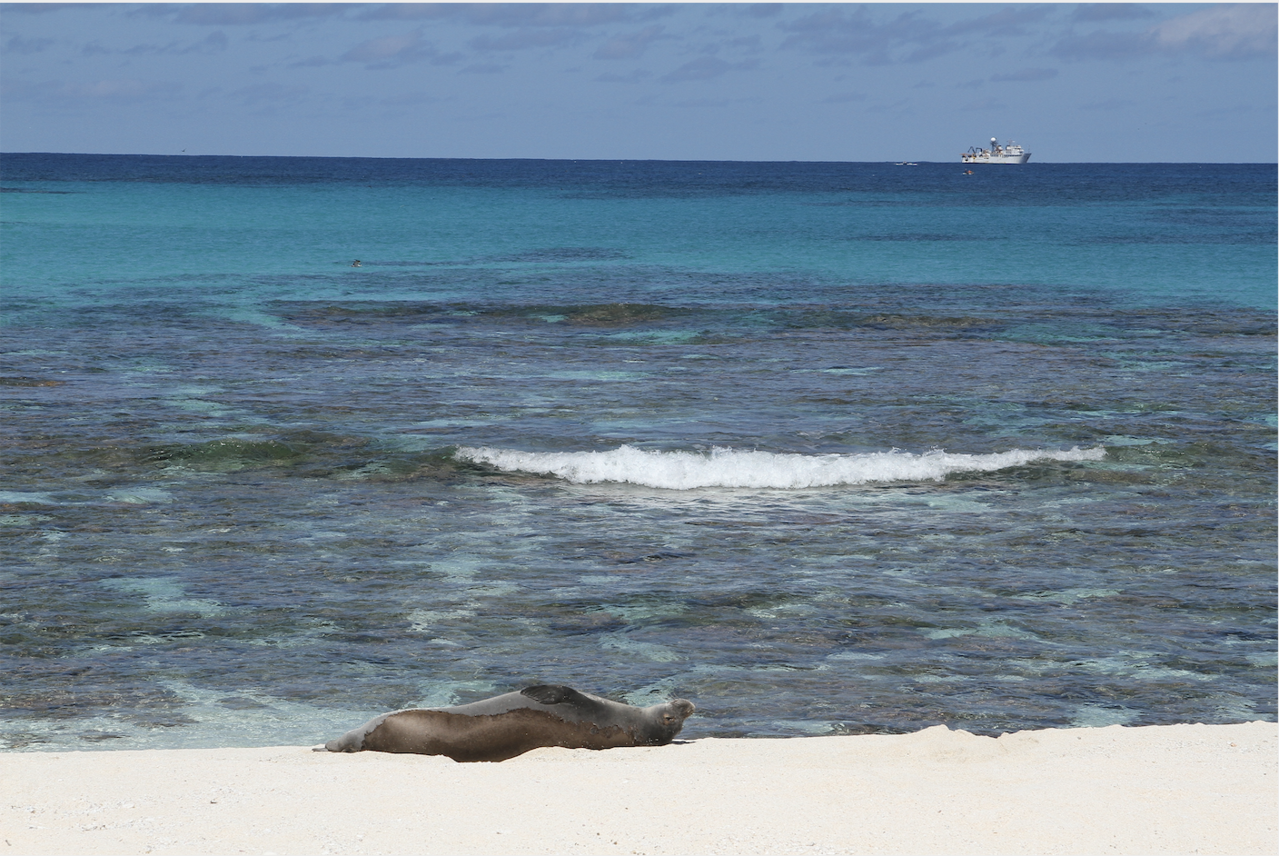 A Hawaiian monk seal rests on Laysan with the Oscar Elton Sette in the background. Photo: NOAA Fisheries.

Nā Mea Hulu, meaning "the furry things" in Hawaiian, can be a poetic reference to monk seals and is an accurate description. Monk seals must molt their fur once a year and their new fur looks shiny. Here, a monk seal basks in the sun at Laysan, with the Oscar Elton Sette in the background. 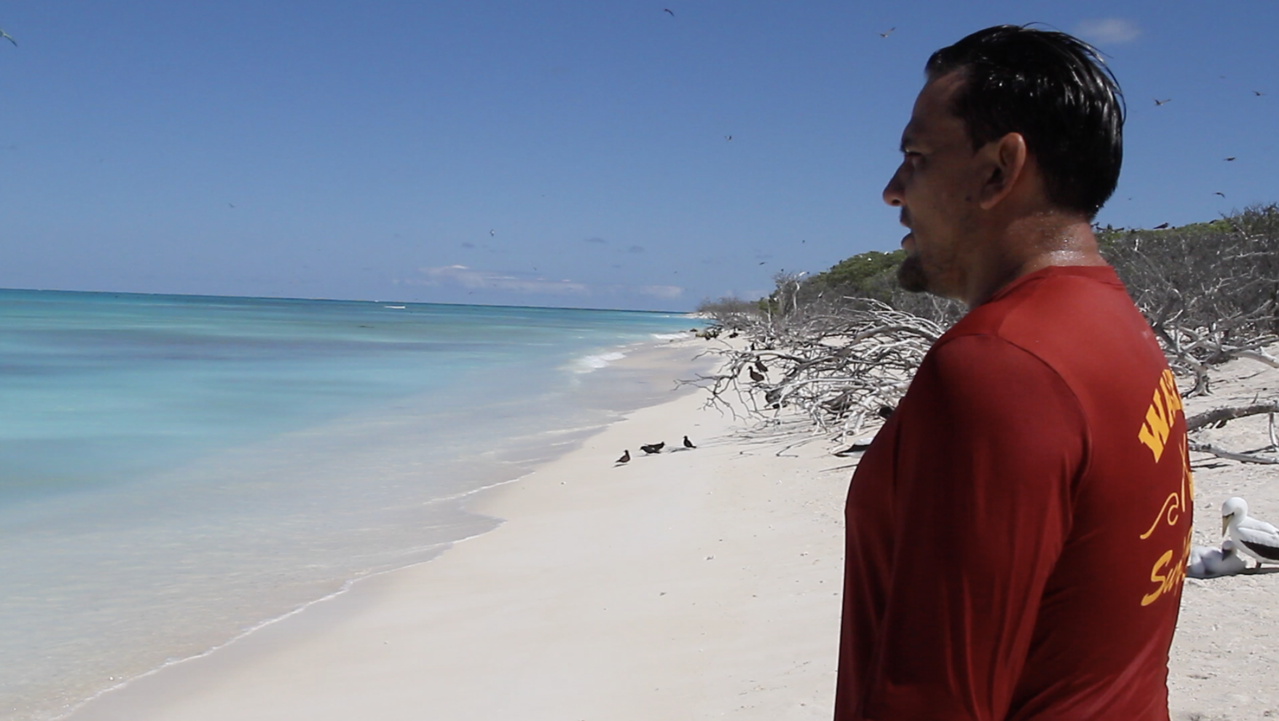 Keoni Wilhelm, a Hawaiian language teacher at Kamehameha Schools, performs an oli upon arrival to Lisianksi Island. Nā 'aumakua is an ancient chant that requests protection from our ancenstral guardians for everyone entering into a place. It is always used when coming onto an island, before walking around, to protect us from injury and to make sure everyone is of one mind and focused on the task at hand. 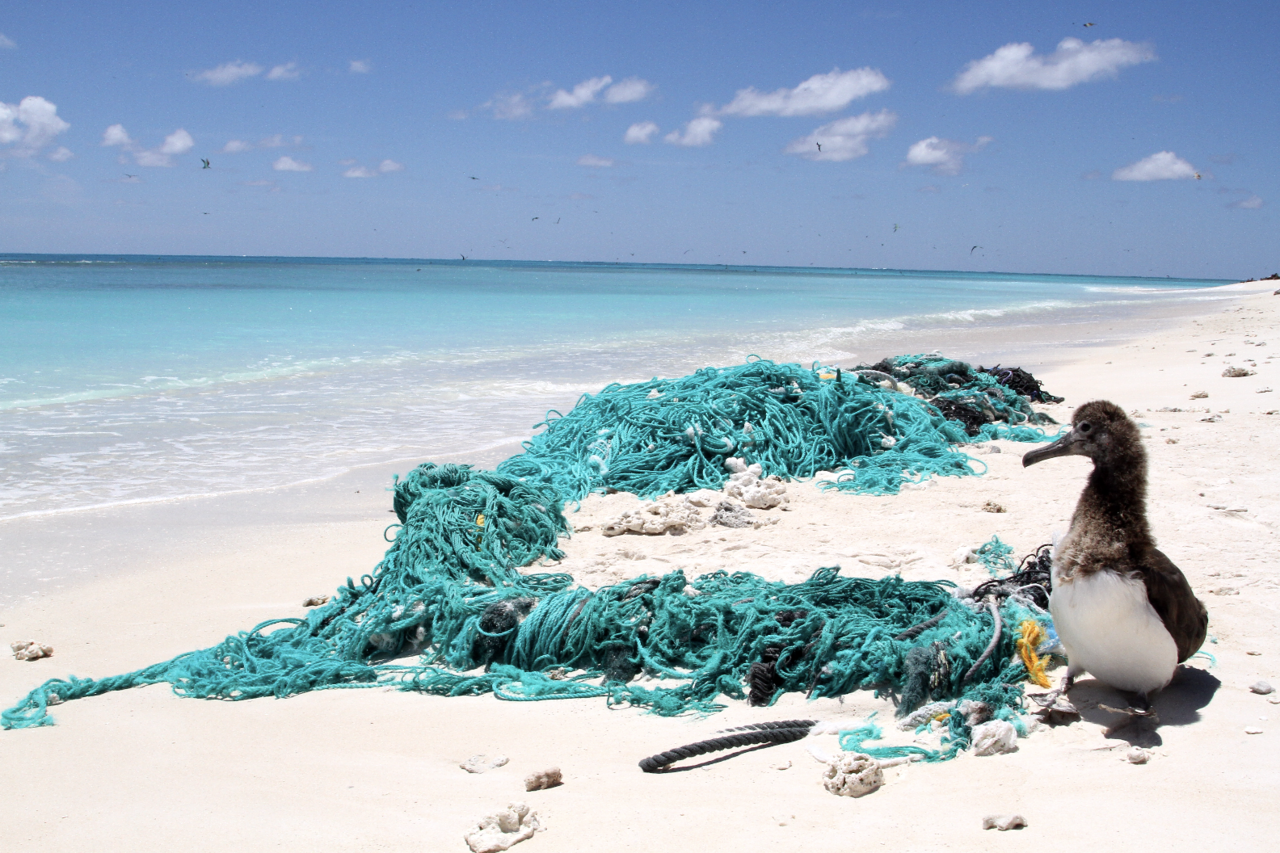 Even though the mission has taken researchers to some of the most remote islands on Earth, the impact of humans is ever-present. This large ghost net washed ashore on Lisianski Island. Like this Laysan albatross standing next to the net, many animals in the Northwestern Hawaiian Islands are at risk of becoming entangled in marine debris. 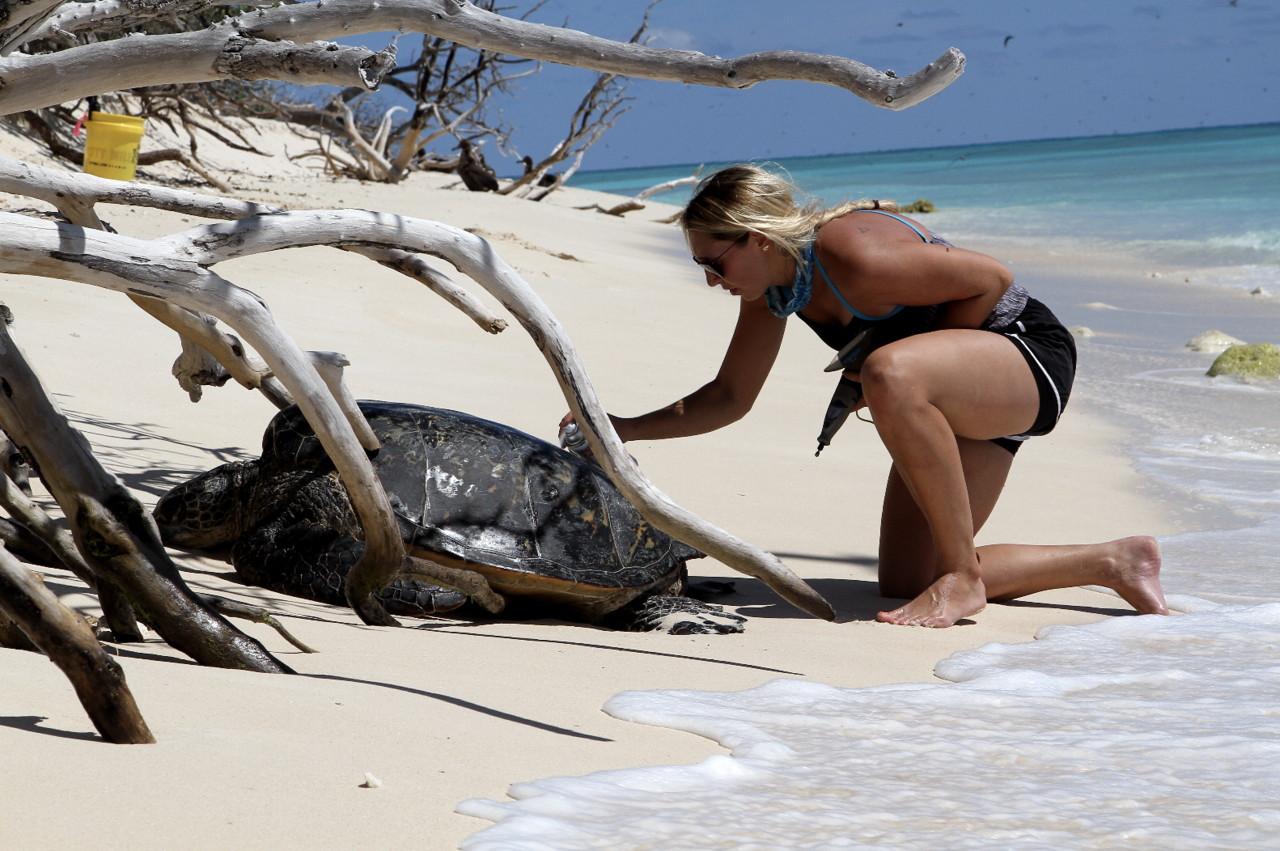 Alex Reininger, a turtle biologist from the Pacific Islands Fisheries Science Center, marks a female green turtle basking on the shore of Lisianski island. She first adds an identification number on the shell and then applies a Passive Integrated Transponder (PIT) tag. If we see her again, we can scan the tag to recognize this turtle. This enables researchers to monitor the turtle's movement track their migration throughout the Hawaiian Islands. 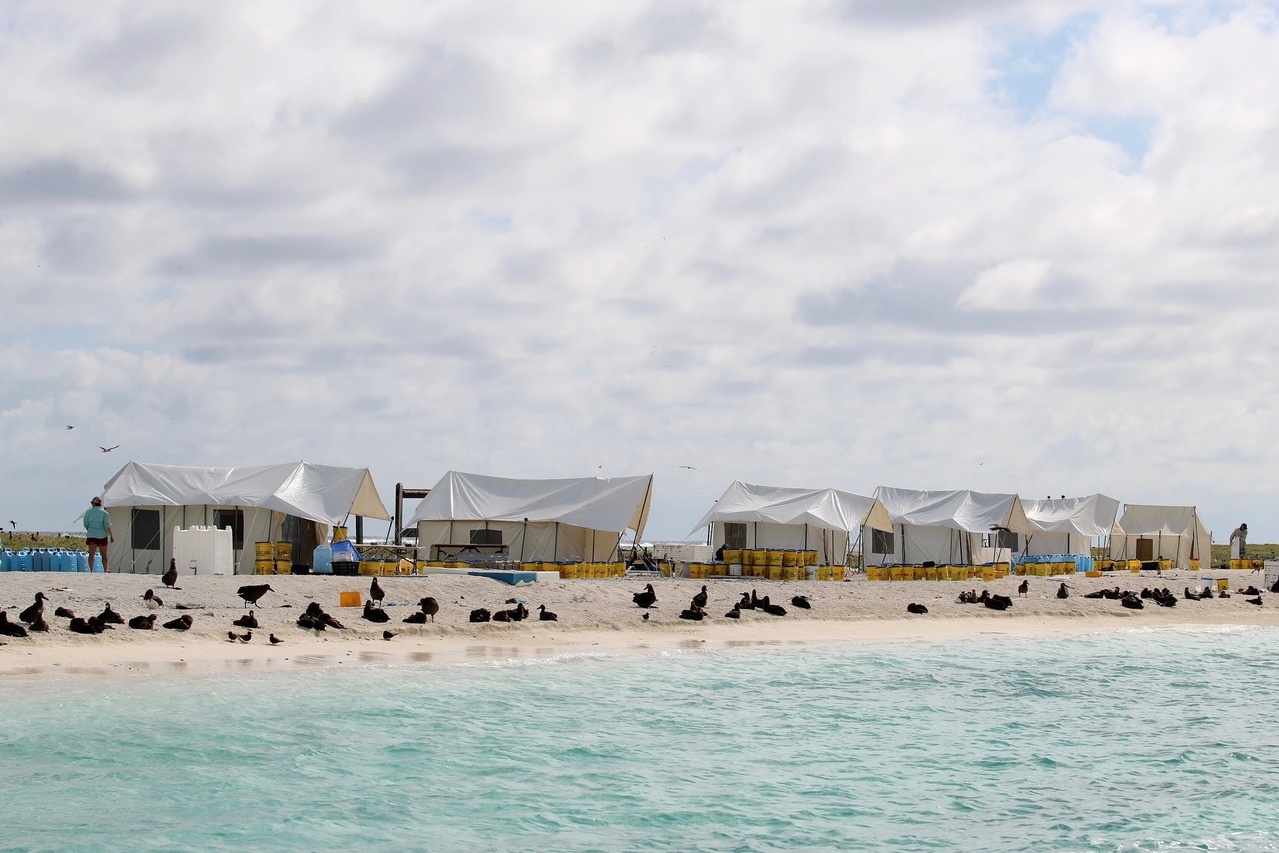 We have pitched the tents for the season at Pearl & Hermes. Photo: NOAA Fisheries.

Pearl & Hermes is a true atoll, made up of seven small sand islands. Barely peaking above the waterline, these low-lying islands are very exposed to wind and weather, making it essential to set up a secure campsite. Here, the tents are fully set up on Southeast Island, where a team of four field campers will spend their season. 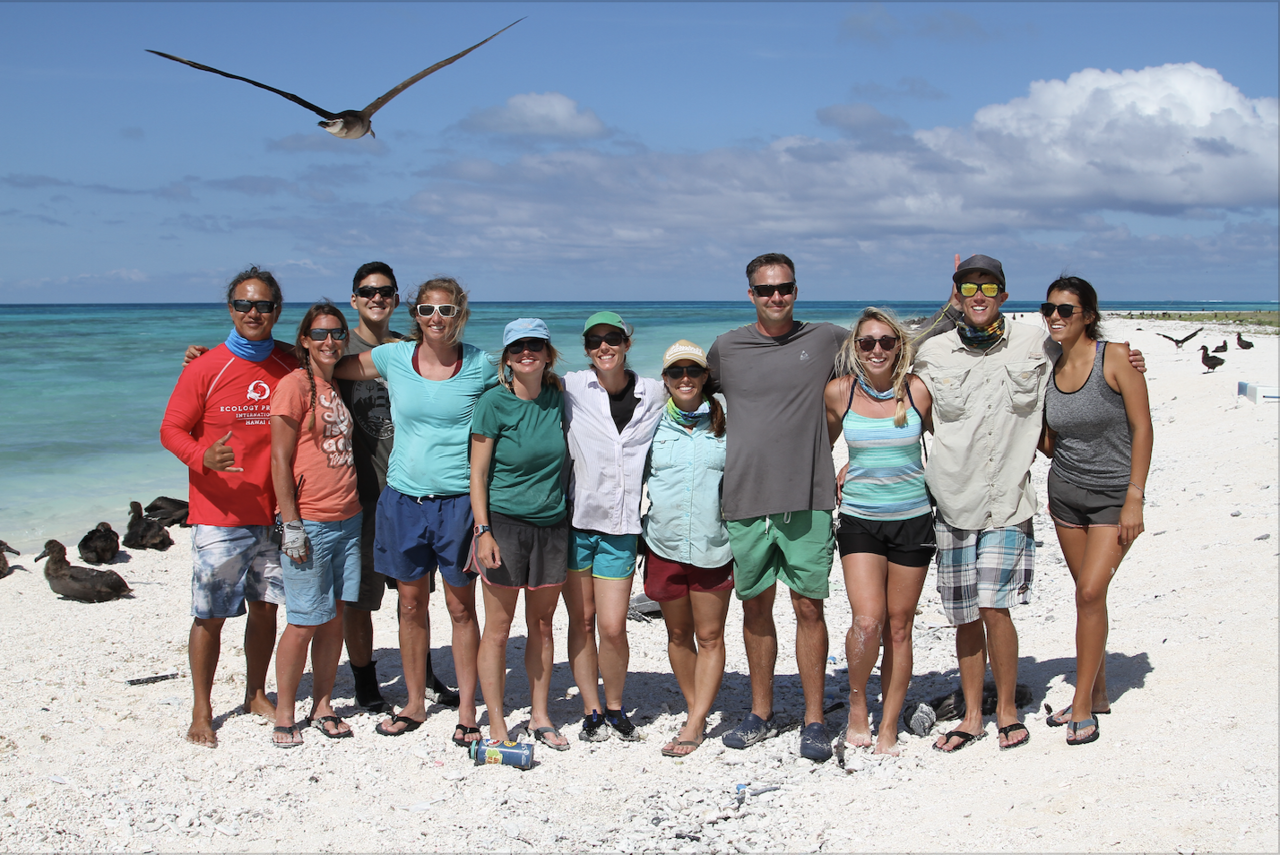 The four scientists who will be spending the season at Pearl & Hermes and the team that helped them set up the camp. Photo: NOAA Fisheries.

A Laysan albatross flies overhead, while the team on Pearl & Hermes smiles for a group photo after a long, hard day of work. Everyone is happy that the research camps are prepared for the long season ahead. 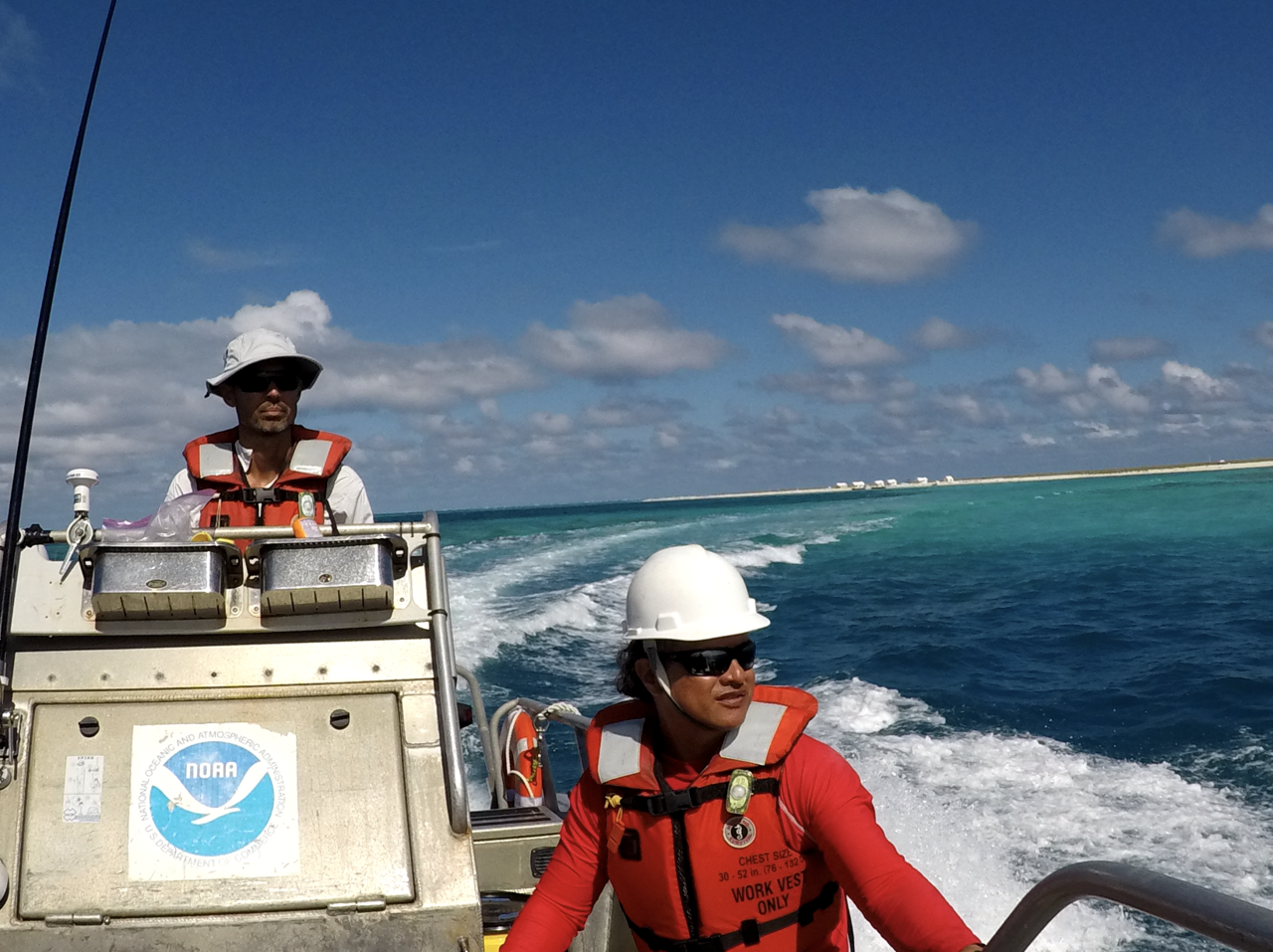 Chief Scientist Mark Sullivan drives the small boat away from Southeast Island at the end of the day, with Ekolu Lindsey onboard. The tents are visible on the island in the background. 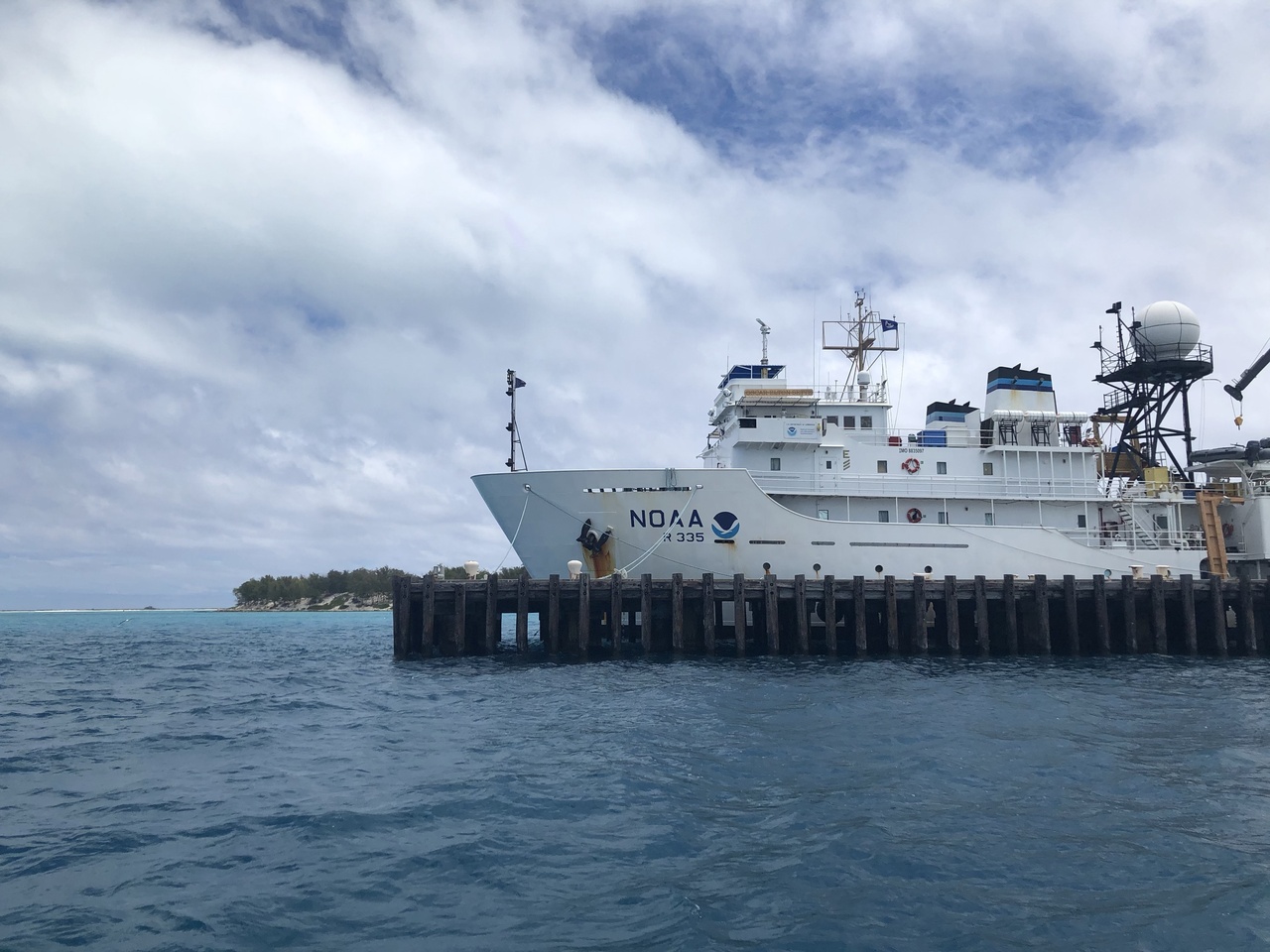 The Oscar Elton Sette at the pier at Midway Atoll. Photo: NOAA Fisheries. 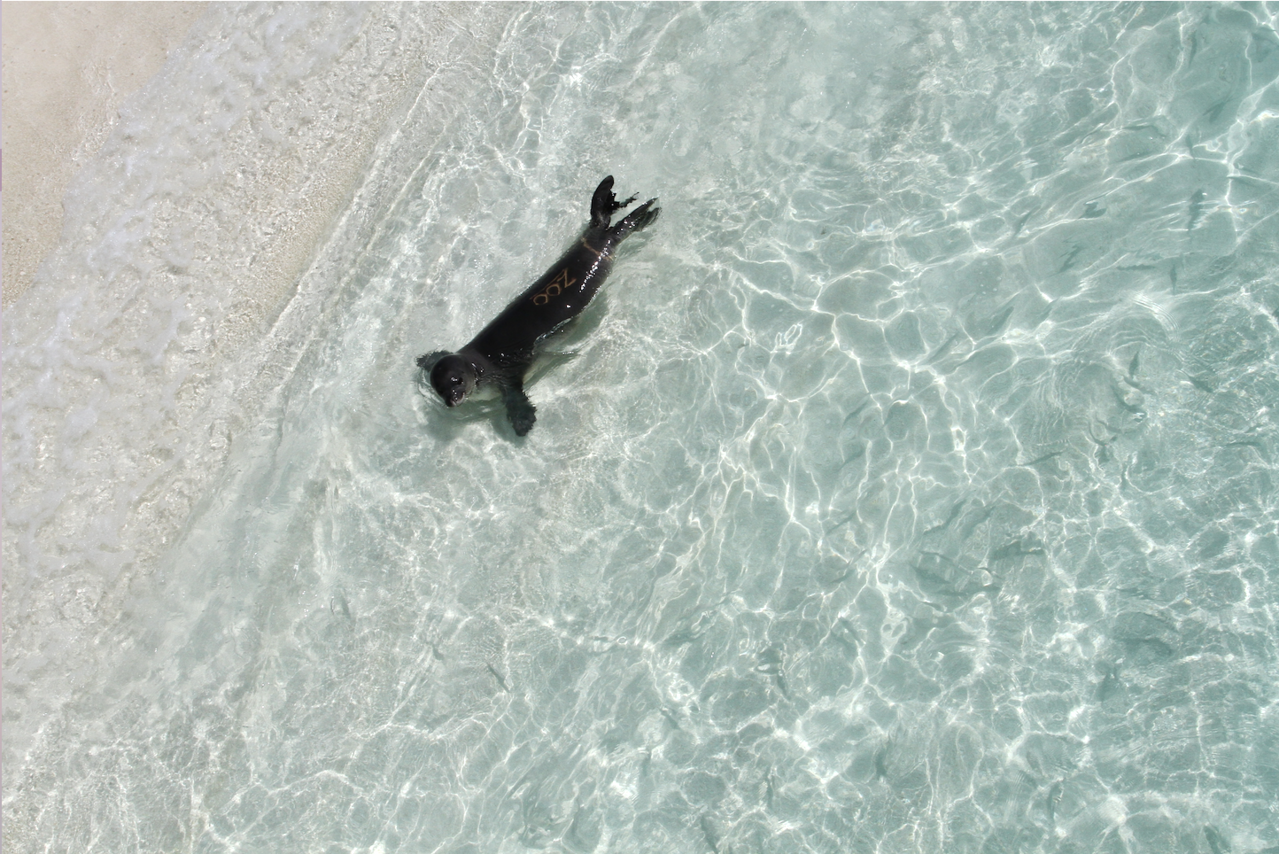 We often mark a monk seal's fur with a letter and a number, like we did with this seal, "Z00." The mark makes the seal easier to identify from farther away so that researchers can collect data from a distance, without disturbing the seal. 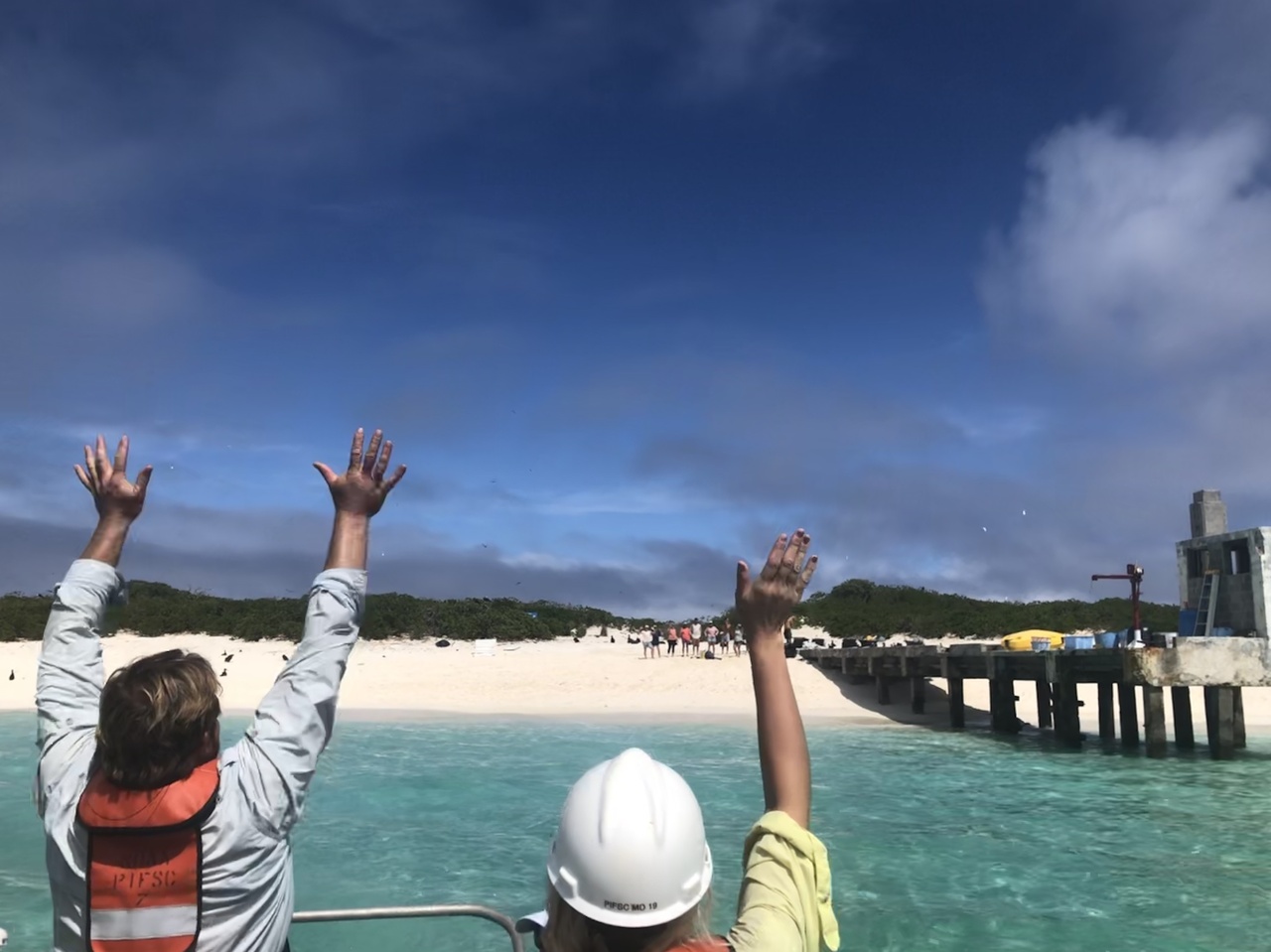 Hōlanikū, also known as Kure Atoll, is the oldest, northernmost Hawaiian Island. It is estimated to be around 30 million years old. The team waves goodbye after successfully setting up their field camp for the summer. 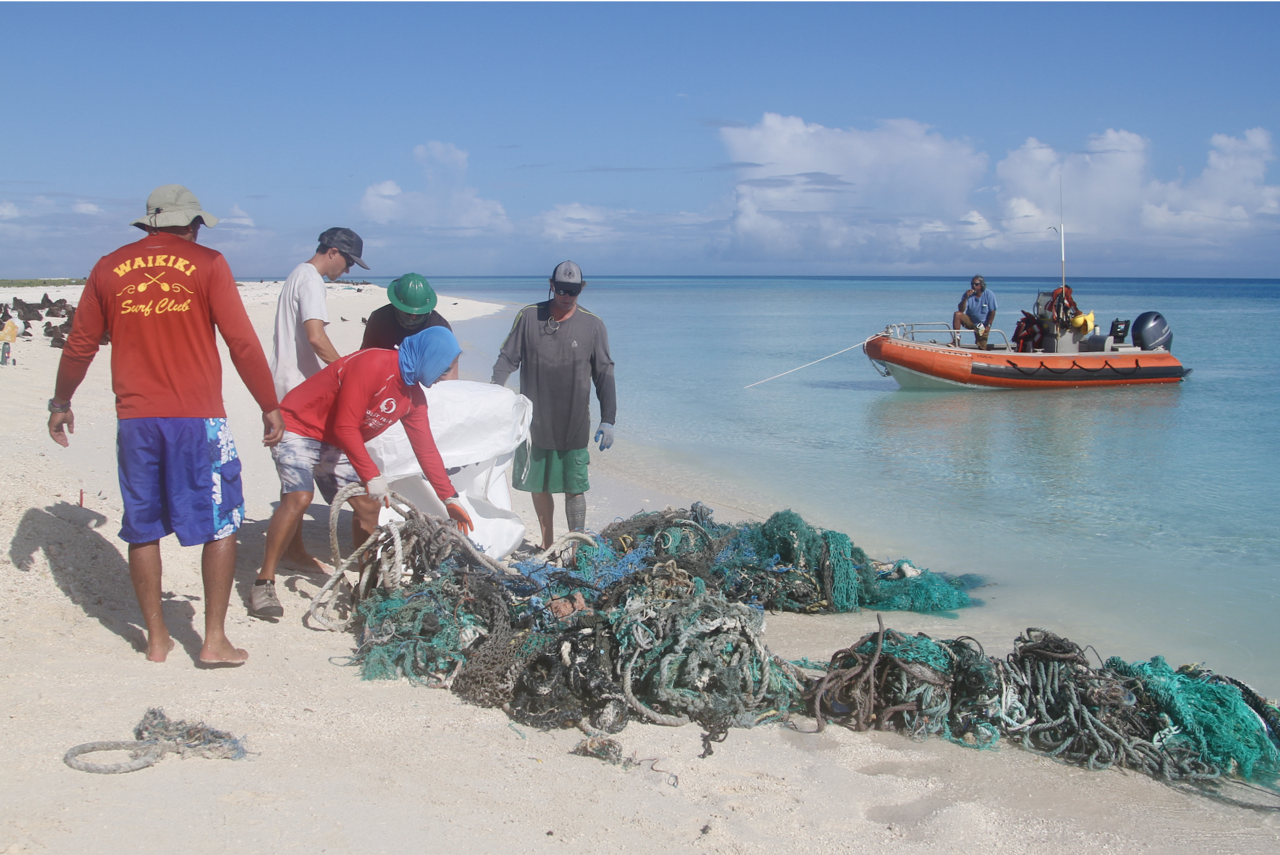 Derelict fishing nets, known as "ghost nets," often tangle together to create a huge mass. They pose a serious entanglement threat to the Laysan albatross chicks that inhabit the beaches here at Pearl and Hermes Atoll. The team works together to cut the mass of nets into manageable pieces to load onto the boat and crane onto the ship for disposal in Honolulu. 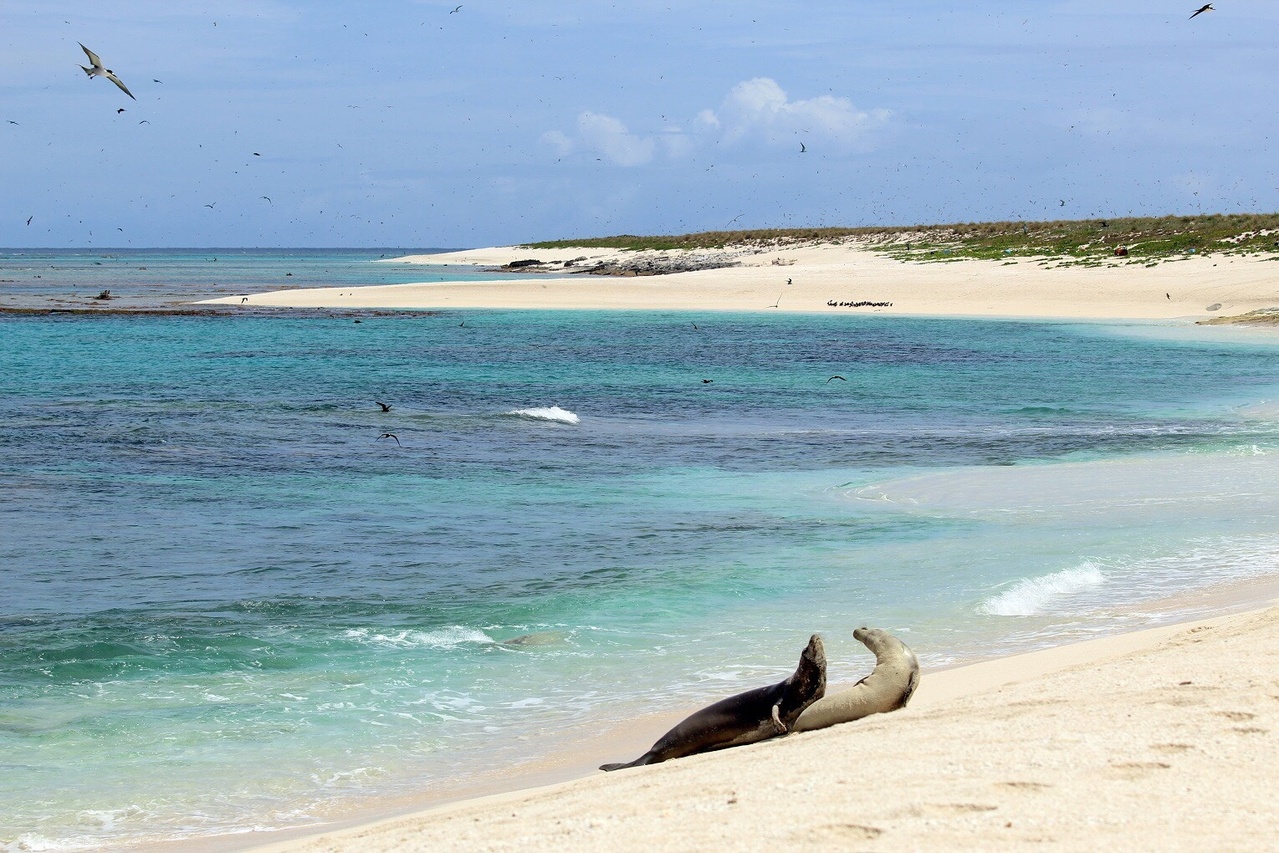 Today, the Sette stopped at Laysan to collect biologist Brenda Becker, who helped the Laysan team establish their camps this year. The team's work today included instrumenting a juvenile seal with a satellite tag and two weaned seals with flipper tags, and filling five large bags of debris to clean up around camp.