The NOAA Ship Oscar Elton Sette is departing on May 15th for a 27-day research expedition throughout the main and Northwestern Hawaiian Islands to support research and recovery of the endangered Hawaiian monk seal and threatened green sea turtle. 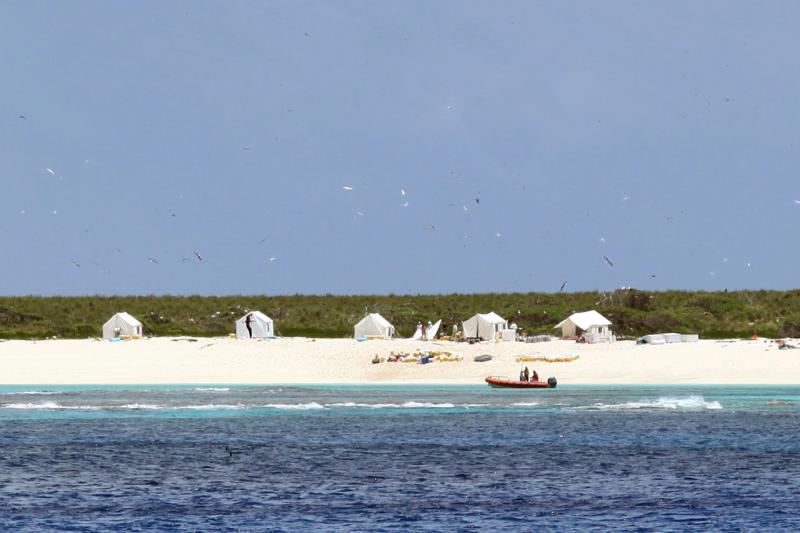 Over the next 4 months, these field teams will measure and tag all weaned seal pups, identify all individuals, conduct beach counts of seals, remove marine debris, and conduct additional scientific and recovery efforts to protect the Hawaiian monk seal population. Additionally, a team of sea turtle biologists will be deployed at French Frigate Shoals to monitor nesting activities, assess nesting and hatching success, and measure and tag basking and nesting turtles. 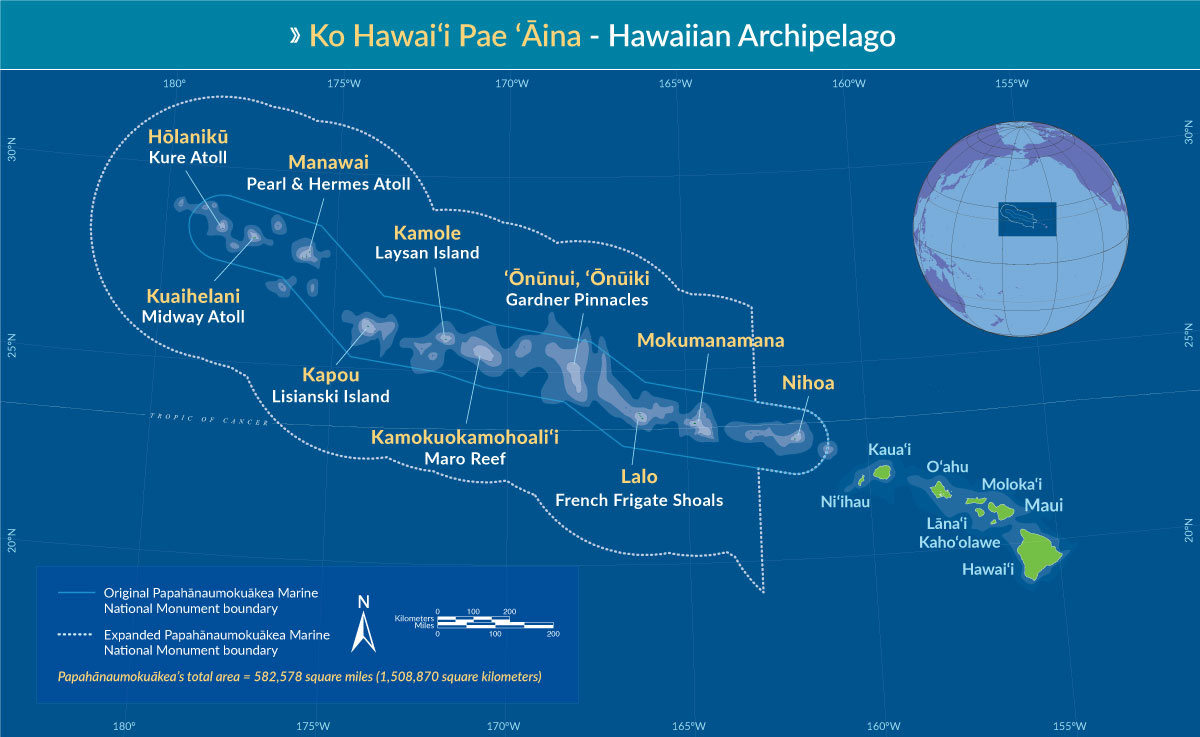 To protect these fragile ecosystems from invasive species, the crew must quarantine anything brought ashore. That includes clothes, tents, stoves, boats, solar power arrays, computers, and provisions sufficient to sustain teams of 2–7 scientists for the length of their stay. They transport the gear by hand from the ship to small boats, which shuttle it to the islands. 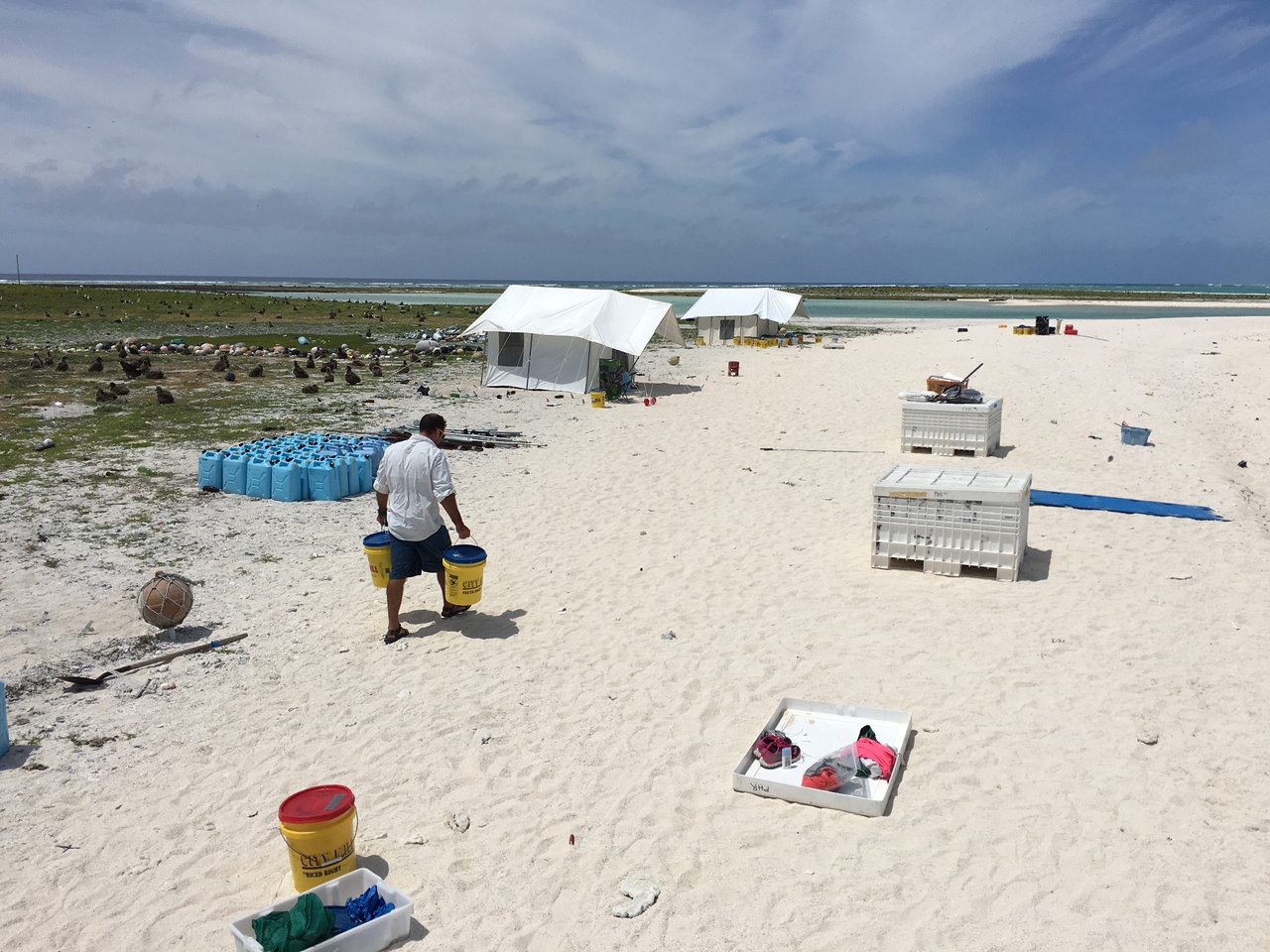 A field scientist brings gear from the small boat to the tents during the set-up of the field camp on Southeast Island, Pearl and Hermes Reef. Photo: NOAA Fisheries.

One of the field teams will have a special focus this year at French Frigate Shoals. In October 2018, Hurricane Walaka passed through the Northwestern Hawaiian Islands and caused major damage to the islands of this atoll. East Island, where a majority of Hawaiʻi’s green sea turtles nest and dozens of monk seals pup, was completely washed away. Over the summer, field staff will research how animals respond to the loss of this important island. 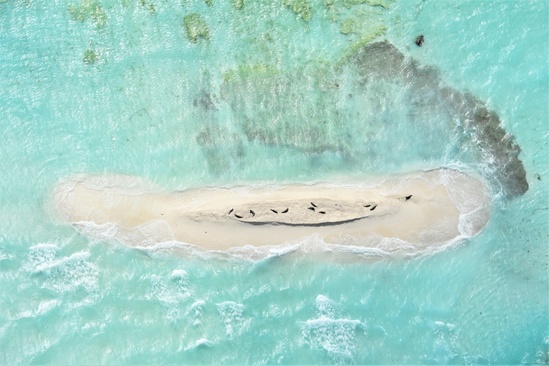 Above aerial photograph is of post-storm East Island in October 2018. Photo: USFWS/Dan Link.

These additional efforts at French Frigate Shoals have split this year’s expedition into two legs. Having a second leg will allow for more time and berth space to accommodate work with partner organizations that have research and conservation projects in the Northwestern Hawaiian Islands, such as state and federal agencies. The Sette will transport Hawaiʻi Department of Land and Natural Resources staff and supplies to Kure Atoll. At Lisianski Island, the U.S. Fish and Wildlife Service will help the NOAA team find routes through the dense vegetation that blocks the shoreline and access to monk seals. On Mokumanamana, the Office of Hawaiian Affairs will lead a small NOAA team past delicate cultural sites to access monk seal habitat.

Natural resource managers from NOAA’s Pacific Islands Regional Office and Papahānaumokuākea Marine National Monument will work with researchers to gain valuable experience in the Northwestern Hawaiian Islands. They will use these experiences to enhance educational materials, assess the impacts of marine activities on protected species, collaborate on Hawaiian monk seal response, and share the cultural significance of sites in the Northwestern Hawaiian Islands.

A Kamehameha Schools teacher will be aboard to bring the work and stories of the Northwestern Hawaiian Islands home to students. They will also be informed for future outreach and education efforts. 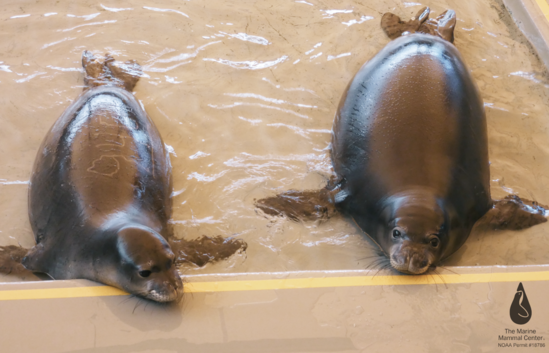 Years of data have shown that underweight pups have a low chance of survival when they wean. NOAA and The Marine Mammal Center collaborate to rehabilitate pups to a healthy weight and return them to their natal sites. This past winter, Ke Kai Ola successfully rehabilitated two seals from Laysan Island. During the second leg of the expedition, The Marine Mammal Center will return them to Laysan.

Biologists plan to deploy instruments such as satellite trackers and underwater cameras to track monk seal movements and underwater behavior. The instruments allow NOAA scientists to study monk seal foraging, movement, and migration. Satellite trackers can provide information on the success of rehabilitated juveniles following their release back at Laysan Island, where they were born. Additionally, cameras may be used at Pearl and Hermes Reef or French Frigate Shoals to observe the under-water foraging behaviors of juvenile seals. This age group is most impacted by food limitation, creating a significant survival bottleneck for the species. 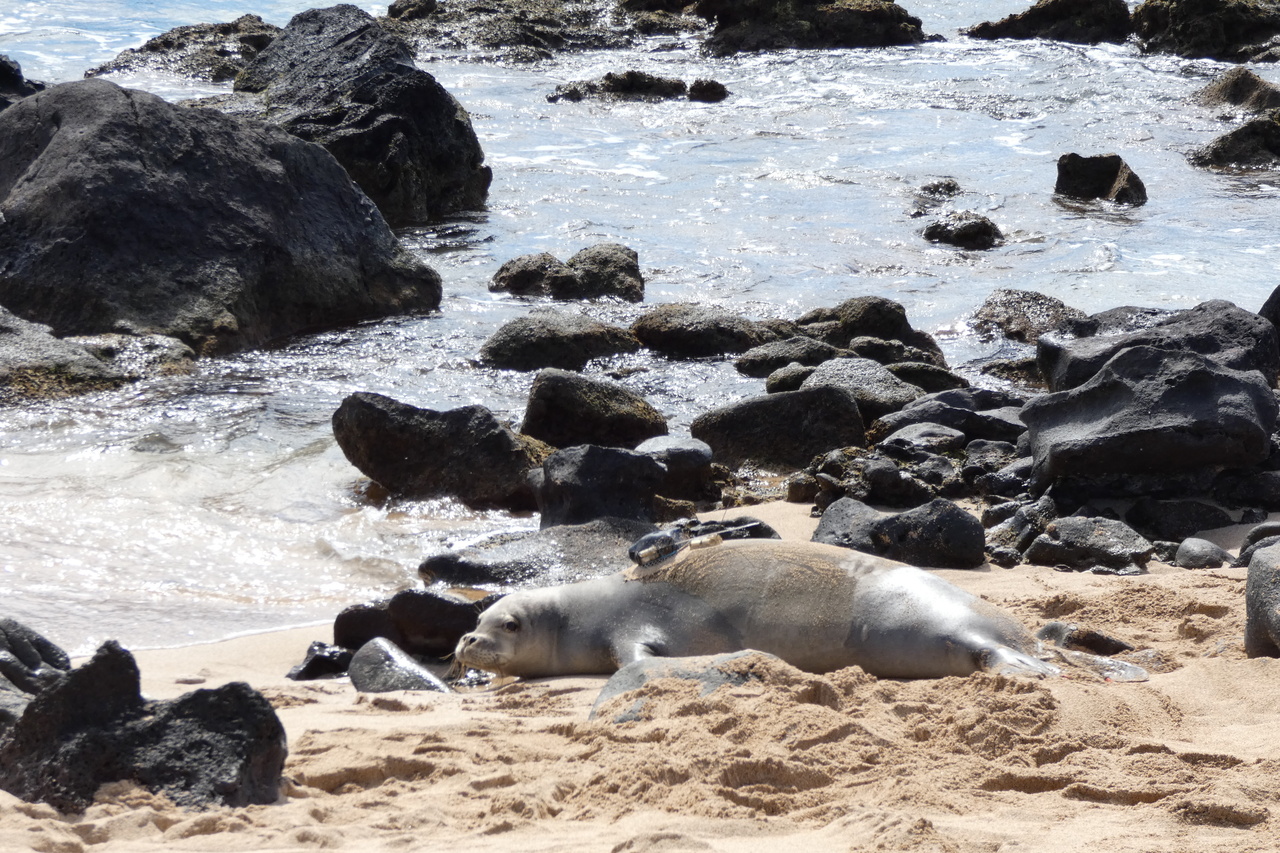 Hawaiian monk seal wearing an instrument with a camera in the main Hawaiian islands. Photo courtesy of Dianne Pike.

The Hawaiian monk seal and sea turtle field camps are successful particularly because they are conducted on a yearly basis. But what sets this season apart is the ability to partner with long-time collaborators such as Fish and Wildlife Service, Office of Hawaiian Affairs, Department of Land and Natural Resources, The Marine Mammal Center, and new partners such as Kamehameha Schools. Follow our progress on the story map!