A Fish That Shapes The Reef 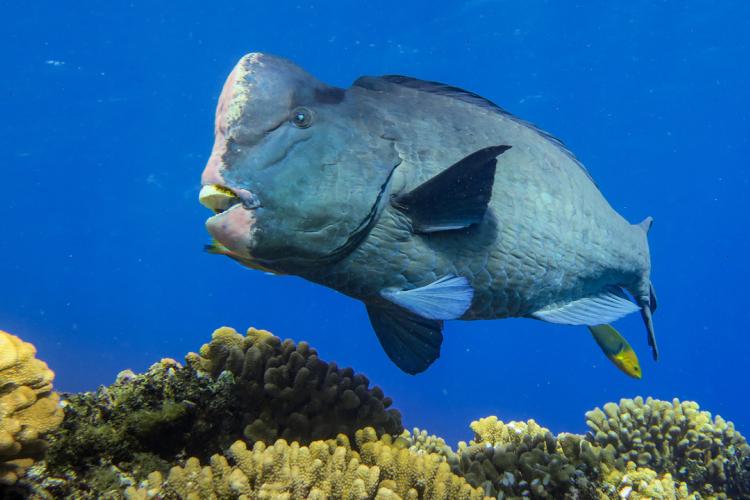 Every three years, we visit Wake Atoll to survey corals, assess the fish populations, and collect oceanographic data for a long-term monitoring effort—the Pacific Reef Assessment and Monitoring Program. Wake Atoll has clear water, healthy coral reefs, and is managed and conserved as part of the expansive Pacific Remote Islands Marine National Monument. It has a healthy reef fish community with plentiful sharks, jacks, and groupers. As a fish research diver, it’s my kind of paradise. Sitting in the middle of the subtropical North Pacific Ocean, 1,500 miles east of Guam and about 2,300 miles southwest of Honolulu, it may be the most remote place I’ve ever been. But for me, and a few other scientists lucky enough to visit the island, there is one thing that makes Wake a special place: Bolbometopon muricatm, the bumphead parrotfish. 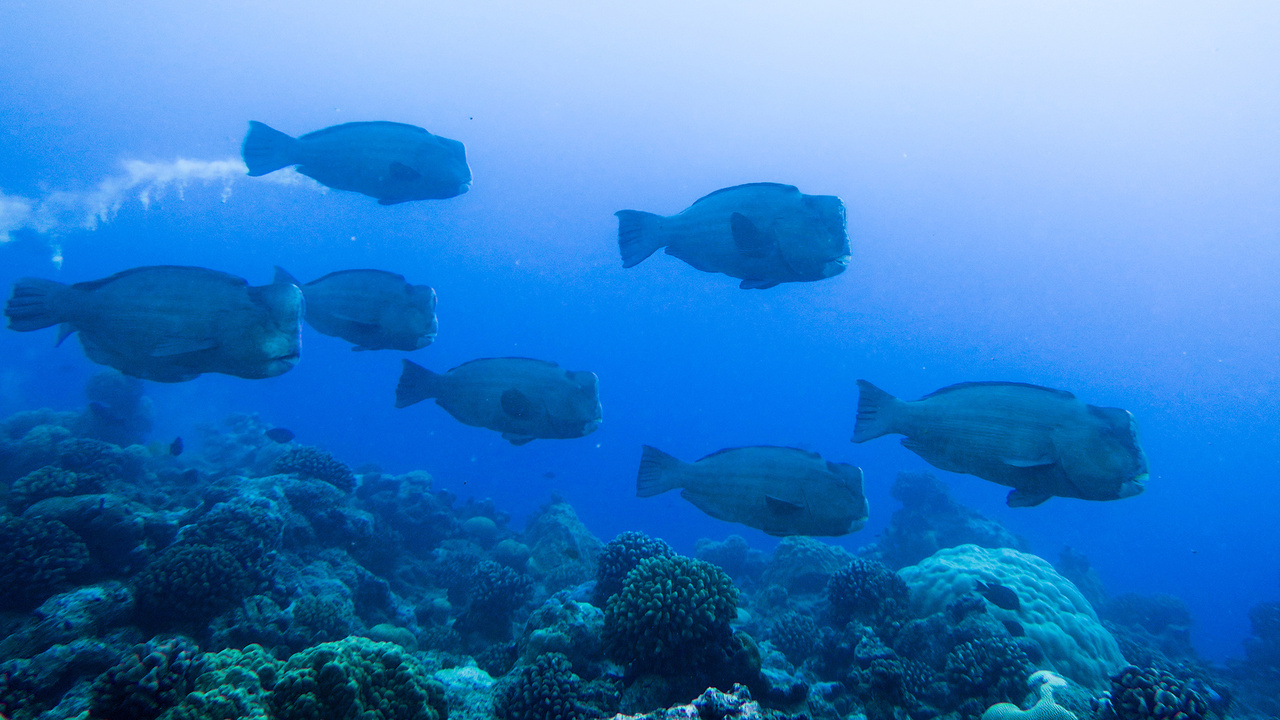 Bumphead parrotfish are an incredible and unique reef fish, differing from other parrotfish by their large size, appearance, diet, and by their ecological impact on coral reef ecosystems. There are a number of other parrotfish that sport a bump on their head, and these may be mistaken for a bumphead parrotfish—that is until you actually see one. Bumpheads have a presence like no other fish on the reef and when they are around I can’t take my eyes off of them. The first thing I notice is their sheer size: growing to 4.2 feet long and up to a 100 pounds (that’s 130 cm and 46 kg for you scientists). Bumpheads are the world’s largest parrotfish and among the largest of all reef fish. When I get a little closer, I can’t help but focus on their incredible beaks. On coral reefs, all parrotfish species are tasked with the important job of keeping algae from overgrowing reef-building corals. 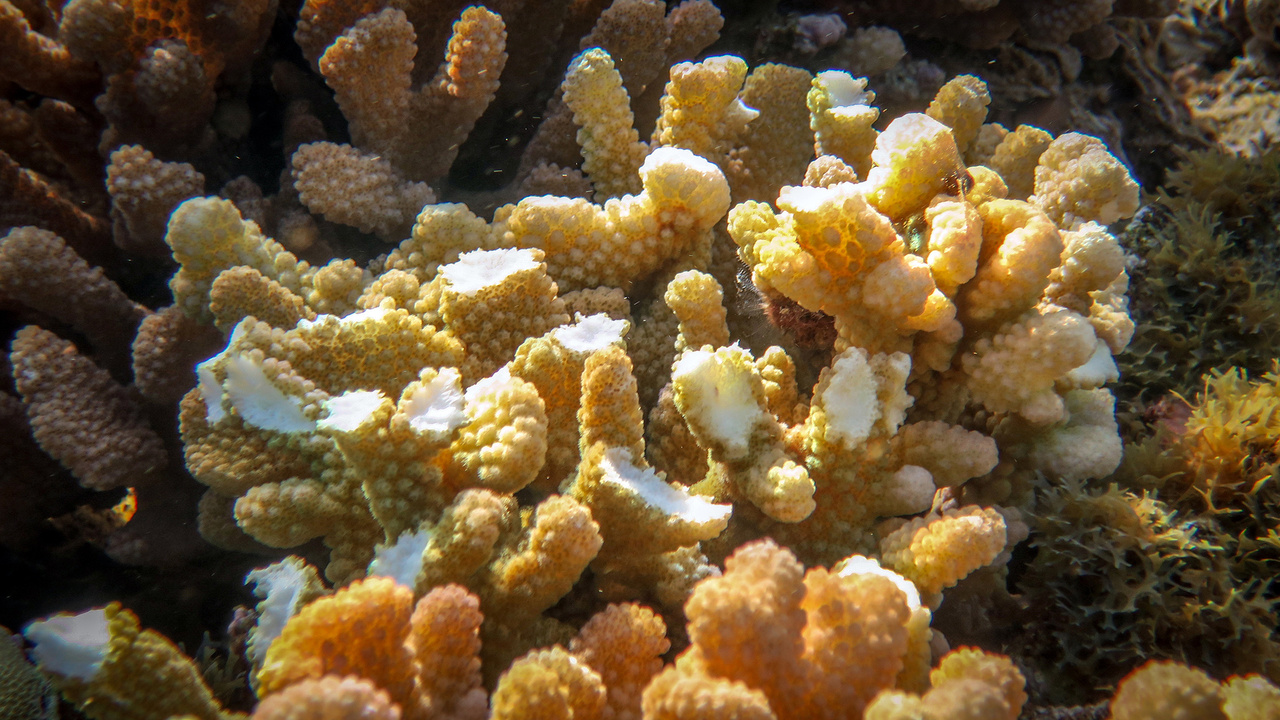 Parrotfish bite and scrape algae off of rocks and dead corals with their parrot-like beaks; grind the inedible calcium carbonate (reef material made mostly of coral skeletons) which is excreted as sand back onto the reef. Larger parrotfish species can take small chunks out of the reef, removing algae and the occasional piece of coral. Bumphead parrotfish are unique in that they are continuously crunching large bites out of the reef, about half of it from live coral. In fact, that’s what they do most of the day. Bite the reef. Excrete sand. Repeat. Over the course of a year a single fish can remove over 5 tons of calcium carbonate from the reef! But by selectively eating fast growing coral species over slower growing species, they help maintain a more diverse coral reef ecosystem. Also, by munching down tons of dead corals every year each fish makes room for young corals to settle, grow and build up the reef. This means breaking down “dead reef” into sand rather than it breaking off in a storm and damaging other parts of the reef. And since bumpheads often travel in groups, sometimes numbering into hundreds and traveling multiple kilometers in a day, this species can have quite an impact on the reef ecosystem. Bumphead parrotfish literally shape the reef. 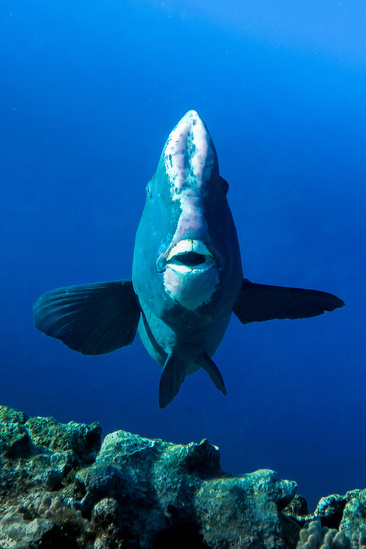 Then, of course, there is the fish’s namesake, its bump. All bumphead parrotfish sport a large protrusion on their forehead which is similar in function to a pair of horns on a bighorn sheep. The largest males have the biggest bumps and will occasionally use them as battering rams around spawning time, smashing headfirst into rivals in an attempt to show their dominance and retain territorial and breeding rights. This incredible behavior was observed by our scientists in 2009 and first documented and filmed by researchers at Wake in 2011. During these mating events, the parrotfish gather or aggregate around a spawning site and can number into the hundreds, an uncommon site anywhere in the world and one that I hope to see sometime at Wake.
Historically, bumphead parrotfish were plentiful throughout much of the Western Pacific, Indian Ocean, and Red Sea. In recent decades, fishing led to sharp declines in abundance and they are now only common in protected or very remote areas. Bumpheads have a few traits that make them particularly vulnerable to overfishing, which has led to local disappearances in many parts of their range. Bumphead parrotfish can live to be 40 years old, they do not reach sexual maturity until 5–8 years old, and likely have low natural mortality as adults so there is not high natural turnover in the population. However, most detrimental to their survival in a human-dominated world is their aggregating behavior and preference for shallow water.
Groups of Bumpheads could be easily netted, as they feed during the day, and at night sleeping parrotfish are easy targets for spear fishermen. With the introduction of scuba gear in the 1960s and 1970s there was a steep decline in bumphead abundances as entire schools could be removed in a single night while they slept. Juvenile bumpheads are also hard to find or study throughout much of their range and raises concerns that some adult populations are too far from juvenile habitats. This distance prevents new youngsters from entering the population to replace adults that have been caught. In areas where juveniles can be commonly found, such as Papua New Guinea and the Solomon Islands, they are associated with mangrove, rubble, and sheltered lagoon habitats. And this is why Wake Atoll may be such a hotbed of bumpheads. 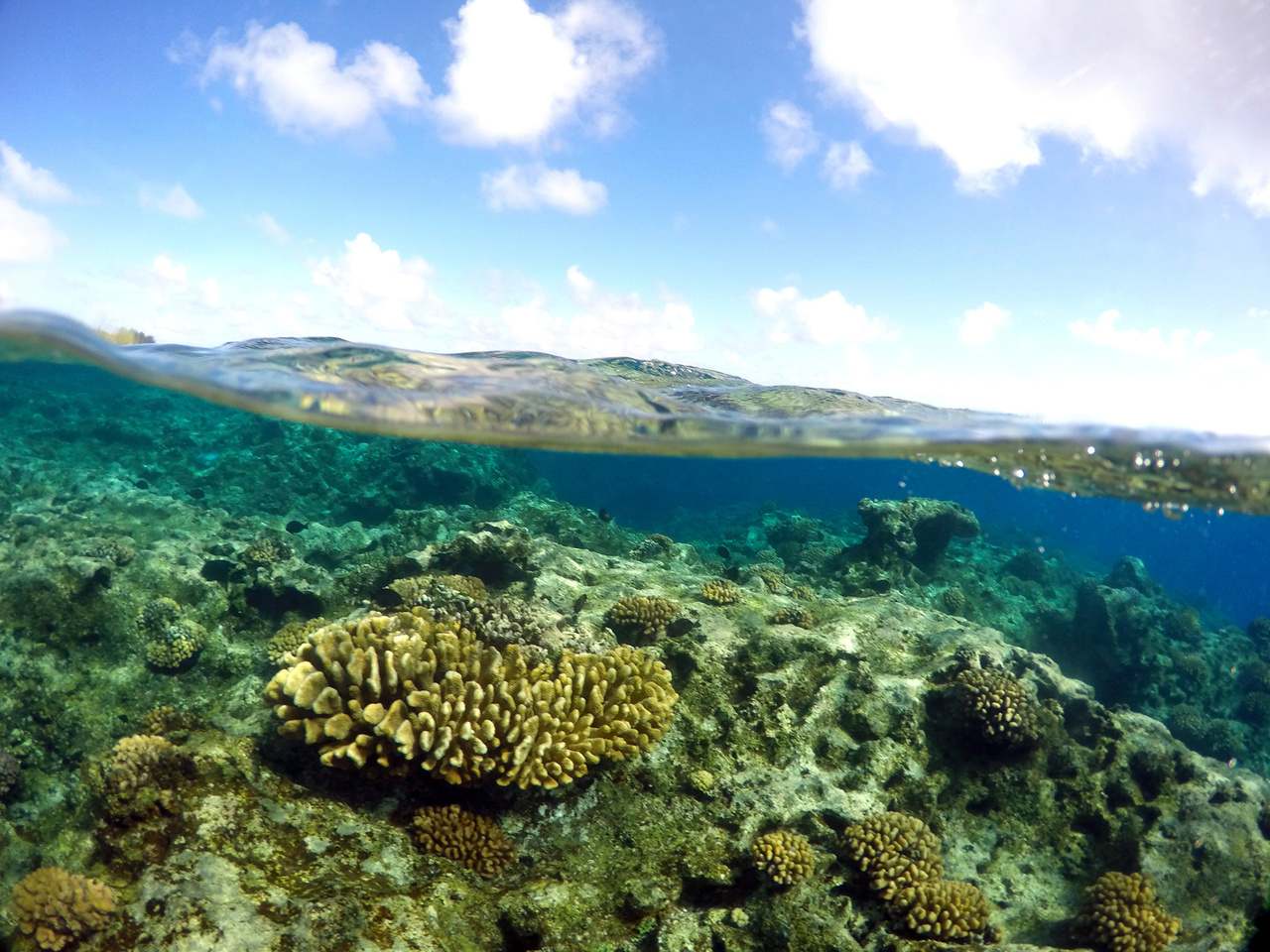 In addition to having a sizable healthy coral reef around the island, Wake Atoll has an expansive, sheltered lagoon. This may be the perfect habitat for the juvenile parrotfish and allows Wake to have a healthy, self-supplying population of bumpheads. And since Wake is protected from fishing, it may be as close to a pristine home as the bumphead parrotfish are going to encounter in today’s world. Wake actually has the highest concentration of bumphead parrotfish in U.S. waters and possibly the world (although certain areas of the Great Barrier Reef in Australia also have very healthy adult populations). During my time at Wake Atoll, I had a number of chances to see them, from loose groups of just a few individuals, to a school of thirteen.

As I write this, the NOAA Ship Hi‘ialakai heads west to Guam, our next survey site where I’ll be spending eight days surveying reef fish. Bumpheads were once thought to be extinct around Guam due to overfishing, but there have been a few sightings by our scientists and partners in the past few years, of both adults and juveniles. So, while my expectations of encountering these giant bulbous-headed, coral-chomping fish are low, I sure hope I do, given how important they are to the natural function of coral reef ecosystems.