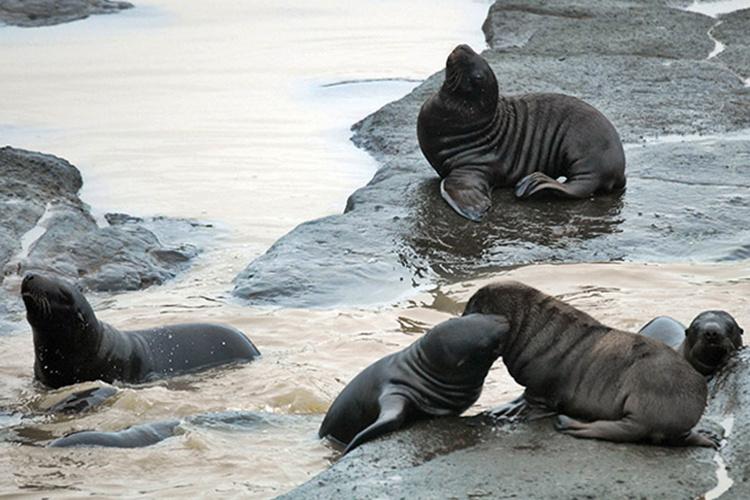 As we were heading to Dutch Harbor, a crew member spotted something rare—a small group of Baird’s beaked whales! Whale researchers noted the animals' flat back and dorsal fin shape. They snapped hurried pictures before the whales went underwater. The species is elusive and can dive for up to 40 minutes, possibly longer.

After dropping off most of our scientific crew and gear in Dutch Harbor, we went on our way again. We headed east toward our endpoint in Homer, visiting some priority sea lion sites along the way.

We received word from the Twin Otter aerial survey team that they were unable to fly over a large rookery site called Cape Morgan, on Akutan Island, due to high winds. This is an important site we visit to look for marked animals. In response, we went to Akutan Island to fly the hexacopter. We successfully captured aerial images of the entire rookery so the Twin Otter crew didn’t have to worry about checking the site. Our team also surveyed on a skiff. 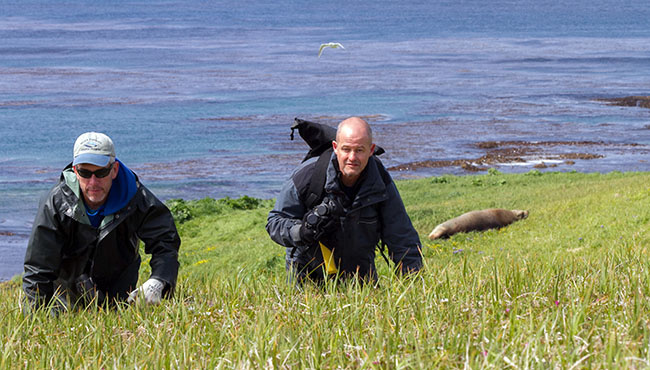 We were lucky to fly Cape Morgan because the hexacopter found a sea lion we didn’t see during the skiff survey. This individual, =297, is an adult female and we saw she has a pup. Before now, the female had not been seen since she was captured and marked in 2002, on Amlia Island, at approximately 9 months old. It’s quite a find to come across an animal we haven’t seen in 14 years, especially a female with a pup!

We ended a long day at Ugamak Island. This site is one of the two islands where the Marine Mammal Laboratory creates field camps to observe Steller sea lions during the breeding season. Observers live in simple shelters for about two months, conducting daily sea lion surveys to look for marked animals, record behaviors, and conduct counts. Marine Mammal Lab scientists also routinely mark animals at these sites. So, there are a lot of animals to keep track of. 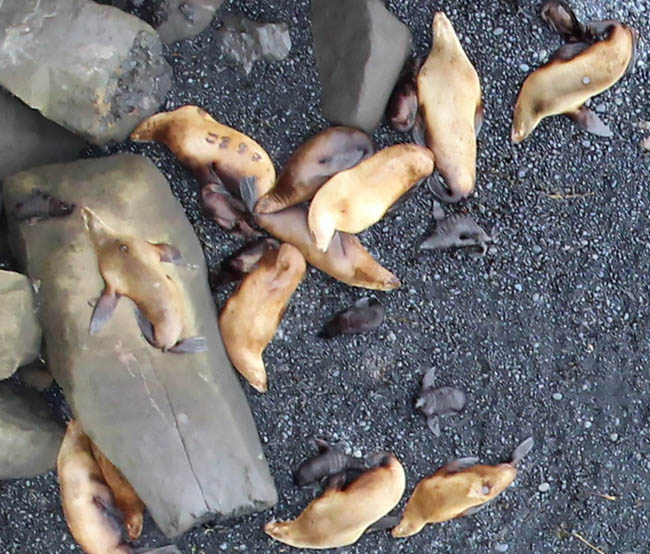 Marked 15-year-old female, with a pup, last seen when she was about nine-months-old.

Steller sea lions, especially females old enough to breed and pup, exhibit strong site fidelity. That means they usually return to the same rookery every summer to have their pup and breed. Males also tend to return to their birth sites, especially as they become reproductively mature. Males may venture out to the Bering Sea and around the Aleutian Islands during the first decade of their life.

Along with all the whale surveys and underwater camera tows, we spotted a total of 61 marked Steller sea lions, conducted 13 flights with the hexacopter to collect aerial images for counts at 11 sites, and downloaded and serviced 19 of the 21 remote cameras—the other two weren’t accessible due to rough seas.

These research cruises are quite busy—especially the first two weeks—coordinating multiple studies along the 1,200 miles of the Aleutian Island chain and eastward in a tight window of time. It’s amazing how much work we have accomplished despite inclement weather. Once again we’ve had another successful year and managed to have a lot of fun along the way. All in all, it’s been a great Aleutian Island summer research cruise and I can’t wait for next year! 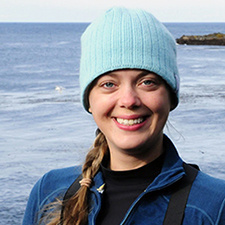