A team of experienced divers and scientists voyage to the Papahānaumokuākea Marine National Monument to survey and remove marine debris. 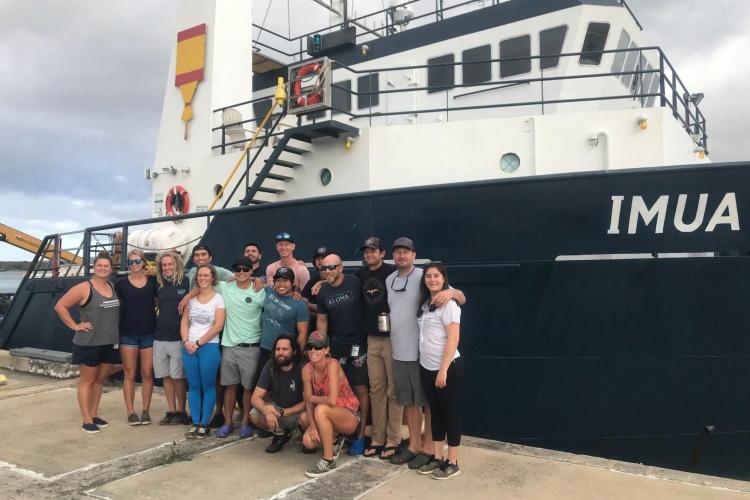 The Fall 2021 Papahānaumokuākea Marine Debris Cleanup Mission is underway. The team is very excited and we wish them calm seas as they journey to remove derelict fishing gear and other marine debris. Credit: NOAA Fisheries/Raymond Boland

Chosen members of the Marine Debris team are about to embark on a monumental adventure. Their mission: to remove derelict fishing gear and other marine debris from the islands and atolls within the Papahānaumokuākea Marine National Monument. The team is 16 strong, consisting of 12 scientists and divers from NOAA Pacific Islands Fisheries Science Center and 4 divers from the Papahānaumokuākea Marine Debris Project, a local nonprofit. Spearheading this expedition, these expert divers and boat operators from distant places and different backgrounds are united by the common goal—to remove marine debris from the ocean and protect marine wildlife. They are well equipped with the skills, experience, and qualifications to successfully accomplish this mission.

The team members are supported by a partnership with NOAA's Pacific Islands Fisheries Science Center and the University of Hawaiʻi Joint Institute for Marine and Atmospheric Research. James is the chief scientist for the marine debris removal mission in the Papahānaumokuākea Marine National Monument. James has managed this Marine Debris Removal Project since 2015 and currently serves as NOAA’s Pacific Islands Fisheries Science Center Ecosystem Sciences Division operations manager and vessel operations coordinator. In his day-to-day work life, he coordinates research expeditions to monitor coral reef ecosystems in some of the most remote areas in the Pacific. He’s conducted more than 1,500 scientific scuba dives at 141 islands with NOAA. When James is not at work, you can find him in the ocean surfing, paddling, or snorkeling. On land, he enjoys spending quality time with his daughter Kelia, and his loved ones. Tate is the operations and lead for this year’s marine debris removal mission. Tate has been with the Pacific Islands Fisheries Science Center and the Joint Institute for Marine and Atmospheric Research for 6 years working for the Ecosystem Sciences Division. He participates in research expeditions—diving to monitor coral reef ecosystems in some of the most remote and pristine locations in the U.S. Pacific Ocean. In his free time, he loves to dive, fish, camp, and backpack around the Hawaiian Islands. Joao Garriques originally hails from Ecuador, but spent most of his young adult life in Thailand and the Hawaiian Islands. Joao really loves and appreciates the ocean! He understands what an incredible place it is and wants to help protect and share its beauty with everyone. Joao leads field operations and logistics for many of the Pacific Islands Fisheries Science Center’s coral reef monitoring projects across the Pacific. He is a graduate of the University of Hawaiʻi at Hilo. Andrew is originally from the suburbs of Chicago. He went to school in California before working as a fisheries observer on fishing boats in Alaska and moved to Oʻahu just in time to be part of the 2009 marine debris team! Andrew is into diving (free, scuba, rebreather), eating foods with mayonnaise-based sauces, and any outdoor activity you can do with a dog and two young kids. He works full-time as a marine ecosystem research coordinator for the fish team in the Pacific Islands Fisheries Science Center's Ecosystem Sciences Division and is looking forward to an epic marine debris cruise! Rebecca is currently a marine ecosystem research coordinator with the Ecosystem Sciences Division at the Pacific Island Fisheries Science Center. After a year spent waiting and wondering when field work may resume, she is ecstatic for the opportunity to go on another marine debris mission. She loves diving, kayaking, hiking, and surfing and wants—more than anything else—to protect the natural environments and the marine life that make these activities so rewarding. Ari Halperin is an east coaster who hails from the Washington, D.C. suburbs. Ari began exploring the foundations of marine science at the University of Miami in 2005, and after having his eyes opened to the amazing underwater world that exists below, he has never looked back! Thirteen years later (now with a graduate degree and three different coral research positions under his belt), he moved to Oʻahu to serve in his current role as a marine ecosystem research coordinator for the climate team at the Pacific Islands Fisheries Science Center. In his free time you can catch him hiking Hawaiʻi mountain landscapes or kitesurfing, diving, and stand-up paddleboarding the island's beautiful waters. Ari was fortunate to have participated on the 2018 marine debris mission to Pearl and Hermes Atoll and is stoked to be a part of this more extensive effort in the larger Papahānaumokuākea Marine National Monument! Marine debris is everyone's problem, and he is excited to be a part of the group that gets to help take care of this global issue! Jessica is originally from Southern California. After finishing her master’s degree at Scripps Institution of Oceanography, she moved to Hawaiʻi to participate in the 2018 marine debris mission. Upon her return, she embarked upon her current position as the science operations technician in the Science Operations Division at the Pacific Islands Fisheries Science Center. In her spare time, Jessica likes to surf, sail, swim, dive, explore, and share fun times with great people. She is passionate about ocean conservation and is excited to combat marine debris this season.

Charley is not originally from Hawaiʻi, but he got here as soon as he could. He really enjoys exploring every facet of the islands, whether it be on land or in the water. Charley greatly appreciates the opportunity provided by NOAA to experience the Northwestern Hawaiian Islands and the Papahānaumokuākea Marine National Monument. Much of Charley’s research and experience has been aimed at the mitigation of damage caused by invasive algae species and coral reef restoration. Charley loves the instant gratification of projects that make an observable improvement to the marine environment. He is really looking forward to joining the rest of the team as they remove harmful debris from the Papahānaumokuākea Marine National Monument. Richard is one of the new marine debris technicians hired for this marine debris mission and he is ready to sling some net. He recently graduated from the University of Hawaiʻi at Mānoa with a Bachelor of Science degree in marine biology and a marine option program certificate. Richard has participated in research diving at Fiji, Micronesia, and Hawaiʻi examining reef, invertebrate, and fish ecology. Now that he is no longer being slowly crushed by his studies, Richard spends his time cooking (makes a mean Thai coconut green curry), picking up and putting down heavy things, and trying to get a good shot of the elusive Potter’s angelfish that won’t stop disappearing into holes.

William is a new marine debris technician and this will be his first mission to the Papahānaumokuākea Marine National Monument. Originally from northern Virginia, he moved out to Hawaiʻi 6 years ago to pursue a Bachelor of Science degree in oceanography at Hawaiʻi Pacific University. He instantly fell in love with the island and may never leave. He has spent the past 3 years collecting data as a NOAA Fisheries observer on the commercial longline fishing boats based on Oʻahu. In his free time, he loves to travel, hike, surf, and shoot photos. He is extremely stoked and grateful to be a part of this project and cannot wait for it to begin! Claire recently joined us from Denver, CO, where she spent the past few years working in natural resource management and freshwater fisheries. Claire earned her master’s degree in biology from San Diego State University where she researched the impacts of parasitism on predator-prey interactions in coastal kelp forest fishes. When Claire isn’t underwater, she spends her time trail running, backpacking, and paddle boarding. This is Claire’s first marine debris mission, and she is super excited to be a part of the team and to help with such an important project! Sarah is a scuba instructor from Kona, Hawaiʻi. She moved to the Hawaiʻi Island after graduating from the University of California Santa Cruz with a degree in marine biology. Her previous job as a scuba instructor led her to daily diving with tiger sharks, blackwater diving in the open ocean at night (with more sharks!), and coordinating ocean and harbor cleanups. After the expedition, she’ll return to Kona to rejoin her husband and aging pup, Tipsy. If she’s not diving, she can usually be found reading, cooking, or practicing yoga!

Kevin is the president and founder of the Papahānaumokuākea Marine Debris Project, a local Hawaiʻi-based nonprofit organization. Prior to forming the Marine Debris Project, Kevin spent 12 years with NOAA in Honolulu, conducting and coordinating ship-based marine research missions across the Pacific. This work also included executing large-scale marine debris removal missions to the Papahānaumokuākea Marine National Monument. He co-led NOAA's marine debris removal efforts in the monument from 2016 to 2019, and saw the growing need for improved methods to conduct that important work. During his time with NOAA, he gained the institutional knowledge and field expertise required to safely and effectively plan and execute complex missions in remote island areas and now brings that expertise to the Papahānaumokuākea Marine Debris Project. Kevin prioritizes building community and hopes to create more grassroots interest in helping to care for Papahānaumokuākea among the people of Hawaiʻi and the nation.

Kristen, better known as “KK,” grew up near the lakes of Vermont with two older brothers who teased her about lake sharks and her purple nail polish. After a summer of living in fear, she went to the library to research their claims. There, she found an entire new world filled with marine life (and the freedom to paint her nails purple). After that day, her answer to the question, “What are you going to be when you grow up?” was always, “a marine biologist.” She now works for 4Ocean Hawaiʻi—striving to lessen anthropogenic trash impacts through physical removals, new technology, and education programs. This will be her sixth marine debris expedition to the Northwestern Hawaiian Islands within the Papahānaumokuākea Marine National Monument. KK hopes you will follow the stories, view the photos, participate in some activities, and be inspired by this plastic issue to change how you live and motivate those around you. Alika is the Papahānaumokuākea Marine Debris Project’s newest hire for the fall 2021 mission. Alika serves his community as a Fire Fighter 2 with the Honolulu Fire Department, founder and director of non-profit Kuleana Coral Restoration, and now, through Papahānaumokuākea Marine Debris Project, by helping protect sensitive marine ecosystems. He is passionate about integrating indigenous Hawaiian knowledge with modern science to provide the best solutions for our future climate challenges. Kama Andrade is originally from Pilaʻa, Kauai, and now resides in Hilo, Hawaiʻi. Currently Kama is adventuring to as many places as possible to learn as much as he can. He’s very passionate about subsistence fisheries and healthy reef ecosystems. He hopes to make his way through college and do all he can to help Hawaiʻi oceans. If you can’t reach him you’ll find Kama spearfishing, surfing, flipping off of cliffs, or cooking.