Research fisheries biologist Tim Sheehan has finished his 2019 Atlantic salmon tagging efforts in Greenland for the year. He and his Atlantic Salmon Federation and Fisheries and Oceans Canada collaborators started tagging salmon last month and have tagged more than 20 Atlantic salmon so far. Their goal is to better understand salmon movement and migration behaviors using special pop-off satellite and acoustic tags. 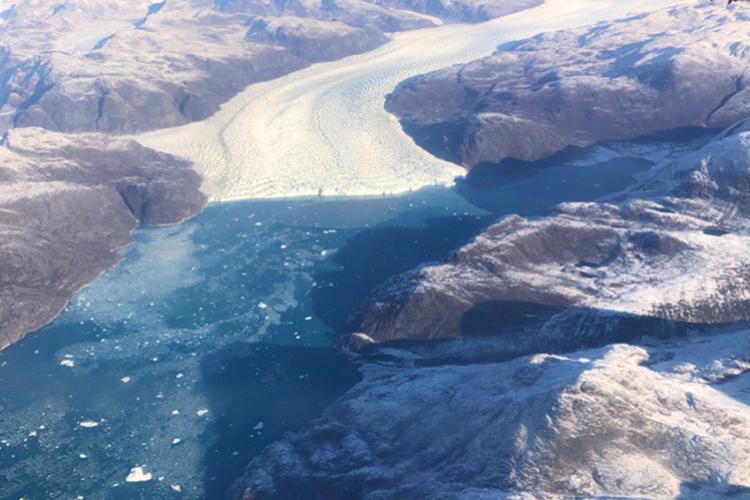 Unfortunately, no fishing today due to scheduling issues.

Spent all day trolling with Brian of the M/S Miss Vange II and unfortunately nothing to show for it. We had one good-sized salmon on, but the line broke and it was gone. We spent the morning trolling toward the inner side of the fjord and then in the early afternoon we migrated to the outer part of the fjord.

Around mid-afternoon Brian received a call from another fisherman fishing in a different branch of the fjord who had caught a few salmon. We quickly pulled our gear up and motored over there. Apparently the fisherman lost 7 salmon in a row — he was having a hard time mending his lines when he had a fish on. Unfortunately for us, the biting seemed to slow down once we got there and no new salmon were hooked — just our luck!

Ultimately, it goes to show you that it pays to have friends on the water and local connections. Brian had never been to this area before and at least for a short bit it seemed to be a fairly productive area for trolling Atlantic salmon. Maybe it’s a new place to add onto our dance card for the future... 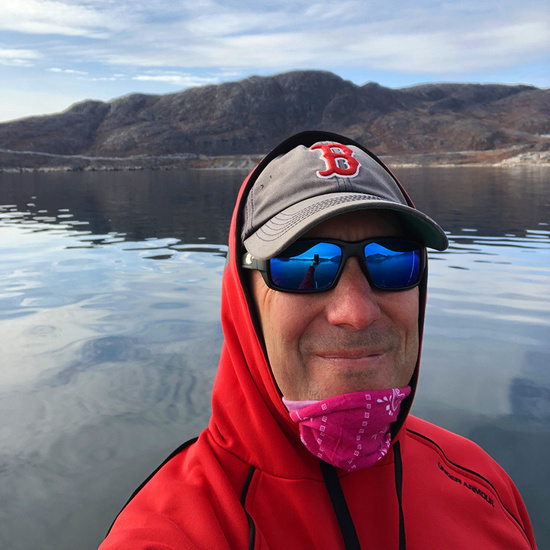 Tim Sheehan takes a moment to snap a selfie while fishing for Atlantic salmon in the mountain-fringed Qaqortoq fjord in Greenland. Photo: NOAA Fisheries.

No fishing because of wind. However, Martha Robertson from Fisheries and Oceans Canada arrived today.  It’s nice to have her here and to overlap for a few days before I head back home. She’ll stay for another week or more to continue salmon tagging.

Martha was supposed to arrive on Friday, but cloudy weather in Narsarsuaq prevented the plane from landing and she was returned to Nuuk. Then on Saturday, the plane was unable to take off from Nuuk due to continued bad weather, but fortunately she was able to depart Nuuk today and land in Narsarsuaq. I was a little concerned that the ferry wouldn’t be running because of the winds, but they were. She arrived safe, sound, and in time for dinner.

Got out fishing with Johannes and Martha today. We decided to go to the new fishing spot and were rewarded with two beautiful large salmon. The first one was 75 centimeters, or just shy of 30 inches, and weighed almost 6 kilograms, or about 13 pounds. The second fish was 70 centimeters, or almost 28 inches, and weighed almost 5 kilograms, or just shy of 11 pounds.

It was good to get out with Martha so that she could see the whole routine. We were able to talk about what I do, don’t do, and why. It’s just like making a peanut butter and jelly sandwich — everyone has their method. While none of them are wrong, it’s good to compare notes, see the process and its order, and understand why the process is ordered in a certain way. Once I can show and explain the process and the order of how I sample and tag a fish, Martha can then decide what process and order works best for her.

Went out again with Martha and Johannes, back to our new favorite spot, and we were rewarded with only a single fish — another 70 centimeter salmon. The fish was sampled, tagged, and released lickety-split by Martha. My work here is done.

Left Qaqortoq on the 7 a.m. ferry and this ride was much smoother than the ride over. It was beautiful and calm with a nice sunrise over the mountains. As we made our way up toward Narsarsuag, the fjord started to ice up which made for an “interesting” ride in our fiberglass boat. It was unnerving to hear the hull constantly cutting through and breaking up the sheet. 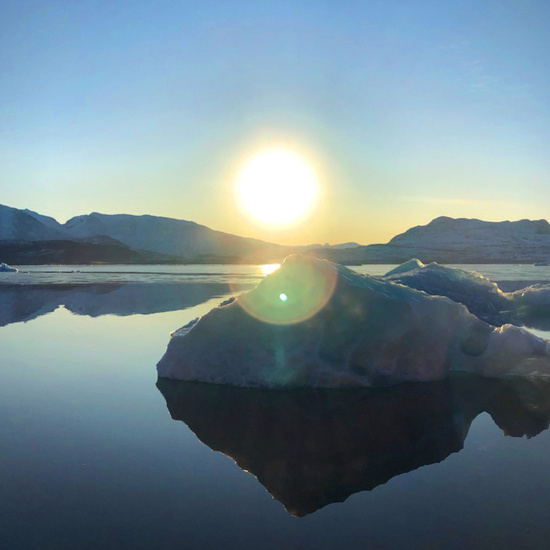 Made it safe and sound and boarded my flight from Narsarsuaq to Nuuk. I had the late afternoon to myself so I walked around town to revisit some of the places from my first trip here in 1999. The town has grown so much and they’re really evolving into a small modern city.

While in Nuuk, I met with some colleagues at the Greenland Institute for Natural Resources (GINR).  I’ve been working with one of them on Atlantic salmon issues for about 10 years or so, and I’ve met a few of the others over the years because they work on similar issues with different species. It’s always good to talk in person — see what others are doing and if there is room for collaboration. Also on the docket for Nuuk:

Scientists have a “big picture” understanding of where Atlantic salmon go — from rivers to the Labrador Sea to Greenland and back – but don’t know the details. Special satellite tags will help get at those details. Each tag is programmed to record data on salmon movement and migration behaviors as well as environmental conditions as the fish swims in the waters around Greenland and on its journey back to natal rivers for spawning.
Previous: New England Moxie Pays Off—Seven Atlantic Salmon Tagged So Far Next: The Dogfish Didn’t Make it, but Sharks Need to Eat Too