Restoring Seven Iconic Reefs: A Mission to Recover the Coral Reefs of the Florida Keys 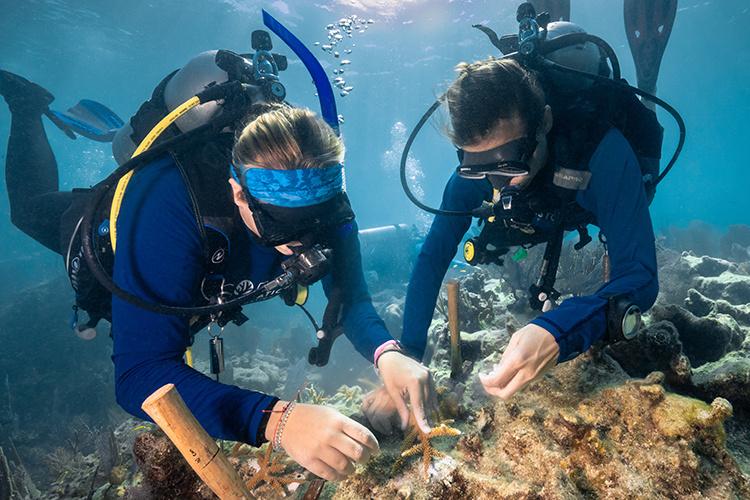 Over the last 40 years, coral reefs in the Florida Keys have suffered dramatic declines. Nearly 90 percent of the live corals that once dominated the reefs have been lost. Emergency action is required to change the trajectory of the health of coral reefs in Florida, and to protect the economy that depends on them. NOAA and partners have developed a first-of-its-kind approach to restore corals at seven ecologically and culturally significant reef sites in the Florida Keys.

There is no single cause for the decline of Florida Keys coral reefs. Locally, impacts to the reefs come from misplaced boat anchors, ship groundings, pollution, overfishing, storms, and disease. Globally, warming ocean temperatures can cause bleaching, compromising coral health.

Losing coral reefs could result in cascading effects to the Florida Keys region’s economy and culture, which are firmly rooted in the local marine ecosystem. This unique habitat generates billions of dollars in recreation and tourism for the state of Florida. Healthy coral reefs provide habitat for recreationally and commercially important fish and a myriad of other animals, including spiny lobster and sea turtles.

In response to the decline in coral reef health, the Florida Keys region has become a world leader in coral reef restoration. Although local efforts have had success at small scales, restoration has not been able to keep up with the rate of decline.

Quick and decisive action is required to stop the decline of coral reefs in the Florida Keys, and to protect the economy that depends on them. In order to restore these coral reefs to benefit generations to come, restoration efforts must be scaled up with a focus at the ecosystem level. 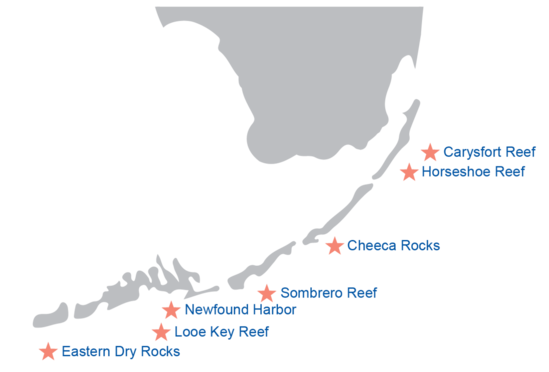 These sites represent the iconic diversity and productivity of Florida Keys coral reefs. They span the geographic extent of the region, a variety of habitats, and a range of human uses. They also have a history of restoration success, or have characteristics that indicate restoration is likely to succeed.

Our approach builds off of other regional management efforts to put Florida Keys reefs on the path to recovery. It is informed by years of research, successful trials, and expertise from more than two dozen coral scientists and restoration practitioners. For the first time, NOAA will proactively intervene with natural conditions by removing nuisance and invasive species and introducing disease-resistant and climate-resilient corals. 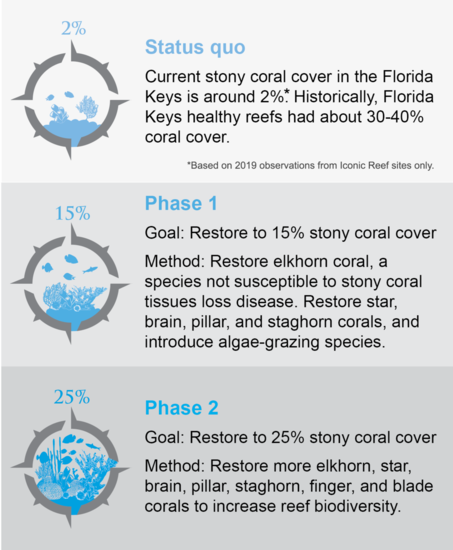 Mission: Iconic Reefs will use a phased approach, working toward a goal of 25 percent average coral cover by the end of Phase 2.

Restoration is set to begin immediately, using a phased approach: 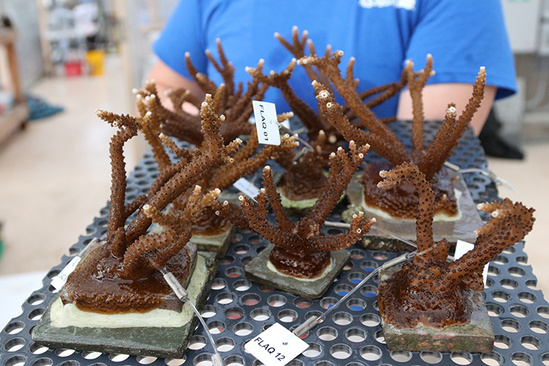 Corals grown for outplanting in the Florida Keys. Photo: The Florida Aquarium.

The effort to put Florida Keys coral reefs on track for recovery is an enormous undertaking, requiring long-term collaboration between many partners. A cross-NOAA team is engaging world-renowned scientists, local restoration partners, and other federal and state agencies. We are identifying ways to work together and save these important, iconic resources.

Together, we can make a difference in reversing decades of decline in these critical ecosystems. NOAA isn’t in this alone. Our expanding network of world-renowned scientists, federal and state agencies, local restoration partners, and community stakeholders will promote a collaborative effort, so that everyone can make a meaningful contribution to Mission: Iconic Reefs. See more information on partner roles.

Across NOAA, offices involved in this effort include:

Outside of NOAA, our partners include:

Last updated by Office of Habitat Conservation on March 08, 2022