Learn more about the two MPAs in the Gulf of Mexico and the research NOAA Fisheries is conducting there.

In June 2000, the Gulf of Mexico Fishery Management Council created two Marine Protected Areas—or MPAs— located between 28 and 30 degrees latitude in the northeastern Gulf of Mexico. In an effort to increase the stock size of gag grouper in the northern Gulf, these MPAs, known as Madison-Swanson and Steamboat Lumps, are closed to all fishing from November 1 to April 30. Surface trolling for species other than reef fish is allowed May 1 to October 31. This action was taken in response to a 1997 gag grouper stock assessment and a recommendation from the Reef Fish Stock Assessment Panel suggesting gag grouper, while not overfished, may be undergoing overfishing. 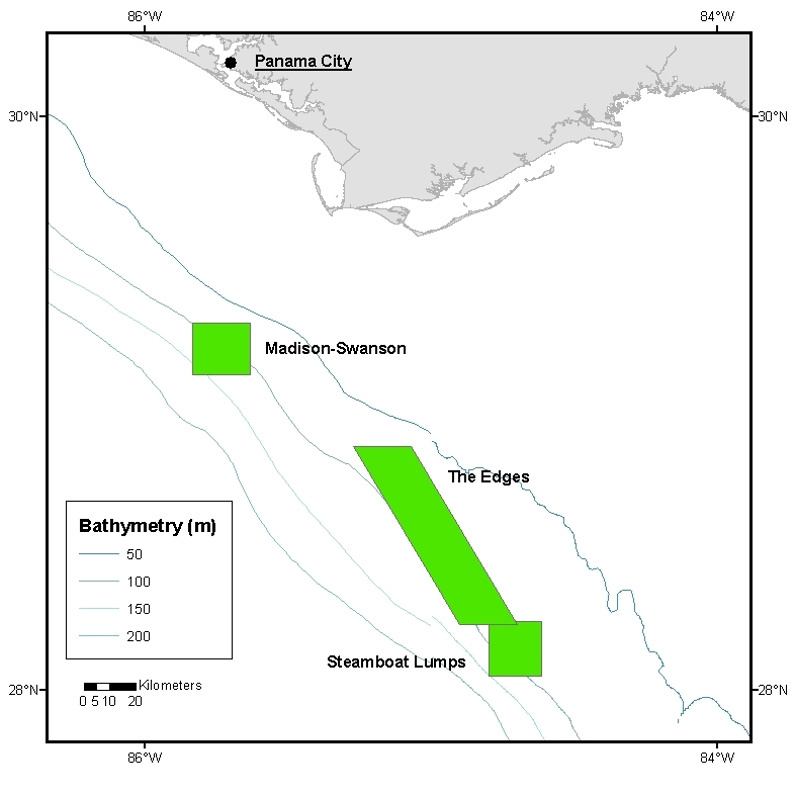 The green boxes of the map represent the location of three West Florida Marine Protected Areas (Madison-Swanson, The Edges, and Steamboat Lumps), which are all located off the West coast of Florida in the Gulf of Mexico along the 100 m isobath.

The life history strategy for gag grouper makes them particularly vulnerable to fishing during their spawning season. Gag grouper are protogynous hermaphrodites, that is, all are born as females and a small percentage switch sex to males once they reach a certain size and if no other males are nearby. During the spawning season, December through April, female gag gather in large breeding harems of up to 50 fish, all guarded by a single male. This male becomes very territorial and loses his natural wariness of baited hooks. The practice of fishing on gag grouper spawning aggregations increases the focus of the fishery on large breeders, decreases the proportion of males in the population, disrupts the social structure of the spawning groups, and can even cause complete loss of spawning groups.

To further protect spawning aggregations of gag and other groupers, a third area known as the Edges was closed in 2009. Located between Madison-Swanson and Steamboat Lumps, the Edges is closed to all fishing between January 1 and April 30. To evaluate the effectiveness of the marine reserve concept in this application, the Madison-Swanson, Steamboat Lumps, and the Edges areas were chosen as study sites. Another area of similar depth and habitat, called the Twin Ridges is adjacent to Madison-Swanson and is used as a control site because it remains open to fishing.

Our research objectives for the West Florida MPAs include: