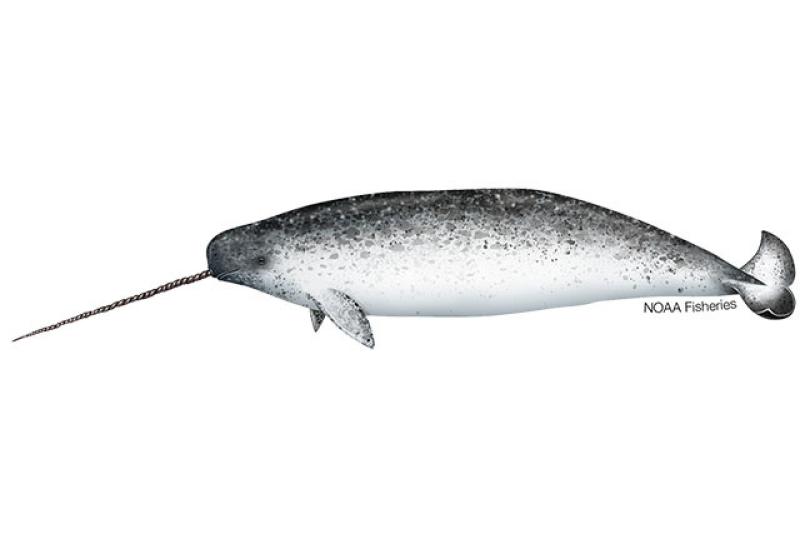 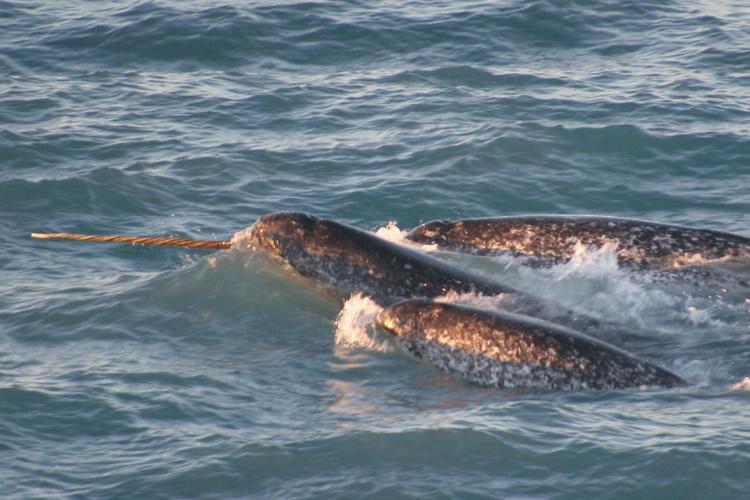 Narwhals are found in the Arctic Ocean. Generally male narwhals have a tooth that grows into a long clockwise-spiraled tusk, resembling a unicorn horn.

Narwhals, like all marine mammals, are protected under the Marine Mammal Protection Act.

NOAA Fisheries and its partners are working to conserve narwhals and further our understanding of this species through research and conservation activities.

Young narwhals are uniformly brownish-gray to ray. As the animals get older, their skin darkens to black and develops white mottling, which gives them a spotted appearance. Narwhals continue to lighten as they become adults until their skin appears white with black mottling on the head, flippers, dorsal ridge, and flukes.

The tusk of the narwhal is its most unique and distinctive feature, which often leads to comparisons to the resemblance of “unicorns.” Narwhals have two teeth in the upper jaw. These teeth usually remain embedded in the upper jawbone of females. When males reach the age of two or three years, the left tooth normally grows out through the front of the head. The tusk is spiraled to the left and may grow up to 8.9 feet long. Occasionally, females with a tusk and males with two tusks have been documented. The primary function of the narwhal tusk is for competition between males and attractiveness for females, but it may also be used as a sensory tool for detecting changes in the environment as well as for capturing prey.

Narwhal’s feed at or near the ocean bottom in deep water, and are known to dive down to depths of 3,937 feet for up to 25 minutes. They create suction using their mouth to capture prey. Narwhal’s diet consists of medium to large-size Arctic fish (e.g., Arctic cod, polar cod, and turbot), squid, and shrimp.

Narwhals live to at least 25 years old, and may live up to 50 years. After a gestation of about 13 to 16 months, narwhals give birth to a single calf in summer (July through August). Calves nurse from their mother for at least a year. Calves are 5.2 feet in length and 176.4 pounds at birth.

Narwhals are hunted by native peoples of the Arctic for their flesh, blubber, and tusks.

They have been killed from being entrapped in ice.

Narwhal tissue may contain high levels of contaminants from the environment.

Narwhals, like all marine mammals, are protected under the Marine Mammal Protection Act.