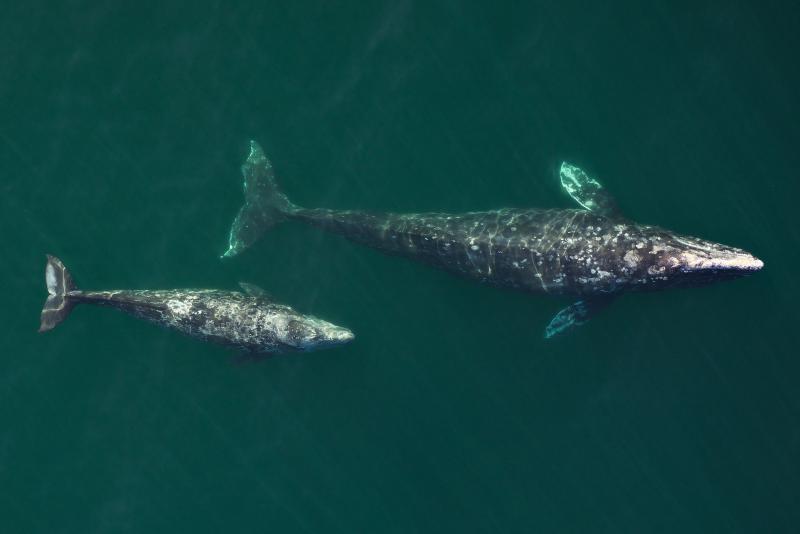 Gray whales were nearly hunted to extinction by commercial whaling. Protections under the MMPA, ESA, and the end of commercial whaling have allowed the species to recover. Credit: NOAA Fisheries (Permit #19091).

Fifty years ago in 1972, Congress passed the Marine Mammal Protection Act in response to growing concerns that certain species and populations of marine mammals were in danger of extinction or had been depleted as a result of human activities. In its 50th anniversary year, we are celebrating the science and conservation successes under this historic act.

Marine mammals are vital parts of our ocean ecosystems. From Arctic ringed seals to humpback whales in the tropics, all marine mammals in U.S. waters are protected under the MMPA.

This Act set the global benchmark for marine mammal conservation as the first piece of legislation to call specifically for an ecosystem-level approach to wildlife protection. Its primary goal is to support sustainable populations of marine mammals based on the capacity of the habitat. Since it was enacted, no marine mammal species have gone extinct in U.S. waters. The Act's protections have stopped the decline of many marine mammal populations and have led to the recovery of several, such as populations of humpback whales, gray whales, gray seals, and California sea lions.

Celebrating 50 Years of Marine Mammals in the Spotlight

NOAA Fisheries celebrates the 50th anniversary of the Marine Mammal Protection Act. This landmark legislation protects all marine mammals in U.S. waters, including four Species in the Spotlight.

Our work to conserve and protect marine mammals

As part of the anniversary celebration, we reflect on 50 years of marine mammal conservation accomplishments and look forward. We have accomplished a lot, and the status of many marine mammal species has improved. The next decades will bring new conservation challenges in the form of climate change and new and expanded ocean uses, such as offshore wind energy. We will continue to use the best scientific information available to ensure marine mammals are healthy and functioning elements of our ocean’s ecosystems.

Last updated by Office of Communications on October 21, 2022