A conservation achievement that resulted in the recovery of the California gray whale population from near extinction.

The present day abundance of gray whales in the eastern North Pacific represents a conservation success story, tied to successful management of a species that was driven to near extinction by past whaling. Gray whales are the most commonly-observed whale on the West Coast. We study their population abundance, calf production, body condition, and continued recovery. 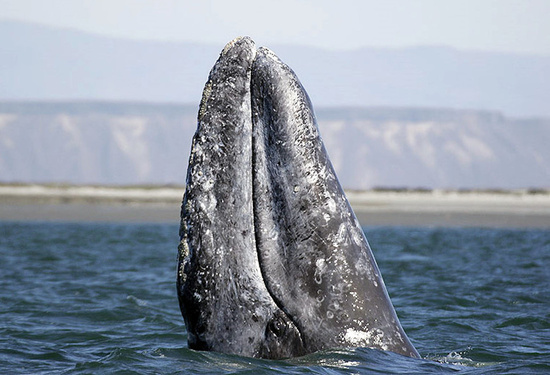 If you visit a beach in California for a few hours when gray whales are migrating between the Arctic and Mexico, you have a good chance of spotting one. Up close gray whales are easy to recognize by their mottled gray and white coloration and smattering of barnacles on their heads.

Gray whales undertake one of the longest annual migrations of any mammal. The eastern North Pacific gray whale population travels 12,000 miles round trip between summer feeding grounds in the Arctic and the warmer waters of Mexico where the whales spend the winter and rear their calves. Gray whales migrate close to shore along the West Coast, south from November to February and north from mid-February through May.

Each year, gray whales are welcomed seasonal visitors off the West Coast and are heralded by all as beloved icons of the Pacific.

Gray whales were hunted nearly to extinction by commercial whaling. The eastern North Pacific population has since recovered, protected by international conservation measures and the Marine Mammal Protection Act in the United States.

We estimate the eastern North Pacific population to be around 27,000 individuals as of 2016 and fully recovered. Most of the whales spend the summer feeding in the Arctic. A few hundred individuals, known as the “Pacific Coast Feeding Group,” do not travel to the Arctic and instead feed along the Pacific coast between southeast Alaska and northern California.

A western North Pacific population of gray whales, which summers off the Russian coast in the Okhotsk Sea, remains endangered with only around 200 individuals. 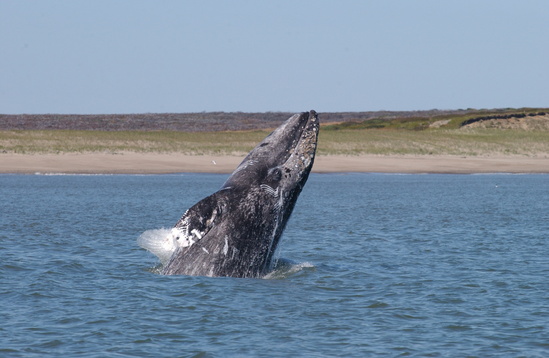 Why We Study Gray Whales

Gray whales provide a unique opportunity to study a population of large whales that has recovered from near extinction. Because many other large whales are still threatened or endangered, scientists have had few opportunities to observe how the dynamics of a recovered population (abundance, reproduction, and survival) fluctuate in relation to the environment.

Gray whales serve as ecosystem sentinels, alerting us to possible changes in the environment. The Arctic, where the primary feeding areas for gray whales are located,  is changing rapidly. Reductions in the distribution of Arctic sea ice may affect the distribution and abundance of gray whale prey, for instance.

Although gray whales in the eastern North Pacific have recovered from low numbers caused by past commercial whaling, the whales continue to face an array of modern threats. These include entanglement in fishing gear, collisions with boats, and disturbance from underwater ocean noise. By closely monitoring their health and abundance, we strive to proactively track any population changes.

We study the annual gray whale migrations using a combination of novel and traditional methods to monitor their population abundance, evaluate their body condition, and estimate the number of calves born annually.

We monitor the gray whale population abundance during the whales’ southward migration from December to February to understand how the dynamics of the population, having recovered from low numbers, are influenced by the environment. Our Gray Whale Population Abundance Project page has the latest population abundance estimates.

We monitor the body condition of the whales and estimate the number of calves born each year during the northward migration from March through May. Our Gray Whale Condition and Calf Production Project page provides details about the project and the latest calf production estimates.

> Gray Whale Research Part 2: From the Brink of Extinction to Recovery (video)