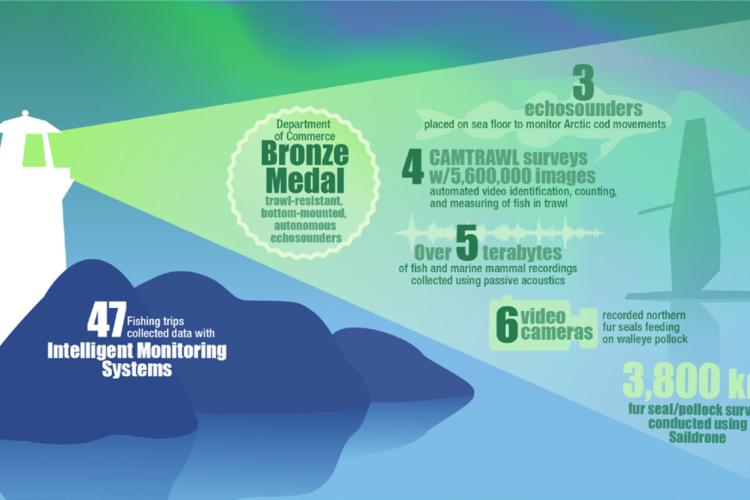 We are always looking for more efficient ways to explore the ocean environment and to track fish catches. We collaborate with fishermen, engineering companies and academic institutions to design and test new technologies and better, more cost-effective methods for gathering data. Through these efforts, we are able to explore areas of the ocean that are difficult or costly to survey with traditional research methods.

Advancing the use of Electronic Monitoring Technologies in Alaska Fisheries

With the publishing of the Electronic Monitoring (EM) final rule in August, the Alaska Fisheries Science Center and the North Pacific Observer Program are now able to use EM systems to collect information on catch and discards for in-season quota management. It’s now possible to collect information on small hook-and-line vessels, where carrying an observer is challenging. The center also developed and tested stereo and chute camera systems to support EM development on fishing and survey vessels. Considerable headway was made testing hardware and developing the necessary applications to automate species identification and length estimation, which is valuable information for assessing fish stocks. Ultimately, the goal is to integrate these new technologies into the existing EM fleet. We are also designing a new electronic interface, an Observer Declare and Deploy System (ODDS), to make it easier for fishing vessels to request to participate in the EM pool in 2018.

We successfully expanded the use of uncrewed, bottom-mounted upward-looking echosounders to augment ship-based, acoustic-trawl surveys (using sound waves to estimate fish abundance). We deployed three echosounders in the Chukchi in 2017, and recovered 2 moorings that were deployed from November to May 2017 in Sanak trough (west of the Shumagin islands). The Chukchi moorings were deployed in an effort to better understand the overwinter survival of age-0 Arctic cod, and the Sanak moorings were deployed to better characterize the timing of spawning to determine optimal timing for ship-based acoustic surveys.

We also conducted four surveys this year using a video camera on our survey nets to help us estimate fish abundance. A newly designed software program also used during the research survey is making it possible to identify, count and determine fish length from the video. As this “smart” technology continues to be improved, someday it may be possible to avoid having to bring all fish surveyed onboard to gather needed species and length information for stock assessments thus reducing fish mortality. However, it is likely that some amount of fish will still have to be manually sampled to collect other important age and diet information that would not be possible to collect with a video camera.

New Tools to Improve Efficiencies in Determining Age of Fish

Our Age and Growth program is experimenting with infra-red spectroscopic analysis to read otoliths and determine fish ages. This new approach for ageing has shown up to a 600% gain in efficiency in pollock ageing with virtually no compromise in quality assurance and quality control measures. It has the potential to define the future direction of many ageing labs in the U.S.

In 2017, over 40,000 fish were examined in our ageing laboratory to track the health, growth rates and status of various age groups of fish over time. This information is used by the fishing industry and resource managers to sustainably manage commercial and recreational fisheries.

Low energy technologies, like Saildrones, can help augment our vessel surveys and enable us to gather needed information on commercial fish stock abundance in areas that are costly or hazardous to survey year-round.

In conjunction with a research cruise to study harbor seals in the western Aleutian Islands, where the species’ numbers have declined dramatically in the past three decades, the Center conducted a collaborative project with the Alaska SeaLife Center and SeaWorld. We deployed novel life-history transmitter tags on wild harbor seals to investigate rates and causes of mortality and female reproductive rates. The Center also added new information to its long time-series of data on the abundance and distribution of harbor porpoise from two Southeast Alaska surveys conducted during July and September. We also implemented a project using environmental DNA, water samples collected near observed harbor porpoise, to increase our understanding of the population structure of this species. This ground-breaking environmental DNA research may help us learn more about the population structure of highly evasive species that are difficult to collect genetic information on.

Acoustic and Other Technologies will Enable Study of Areas Considered “Untrawlable”

Bottom-trawl and acoustic surveys conducted by the Alaska Fisheries Science Center are the main source of fishery-independent data for assessing fish stocks in Alaska. However, bottom trawls cannot sample in steep, rocky areas (“untrawlable” habitats) that are preferred by species such as Atka mackerel and rockfishes. Many species of rockfishes are long-lived and reproduce late in life, making them particularly vulnerable to overfishing. Managers need accurate stock assessments to keep these fisheries sustainable. Unfortunately, assessments based on surveys of trawlable areas are highly uncertain for species that live mainly in untrawlable habitat. Untrawlable areas make up to about 20% of the federally managed area where surveys have been attempted in the Gulf of Alaska and up to about 54% of the federally managed area in the Aleutian Islands.

A sampling plan for assessing fish in untrawlable habitats in the Gulf of Alaska is being developed for future implementation. In this planned survey bottom trawl samples will be replaced with high resolution photos from which fish species and sizes can be identified. Stereo cameras lowered from ships or moored near or on the seafloor will be used where each will be most effective. Research on untrawlable habitats will continue to be important for producing the most accurate stock assessments possible for species such as rockfishes that prefer these inaccessible areas.

Staff in our Fisheries Monitoring and Assessment Division traveled to Korea to assist Korean scientists in developing debriefing and IT systems for their observer program. We also hosted visiting Korean scientists from the Korean Observer Program as part of an exchange program with the National Institute of Fisheries Science (NIFS) observer program as they develop quality control mechanisms into their observer debriefing process.