For the last decade, jellyfish have captured the interest of researchers, because of their ability to quickly increase in numbers and size, jellyfish have the potential to alter food webs through competition and predation and thus, influence the abundance of commercially important species. 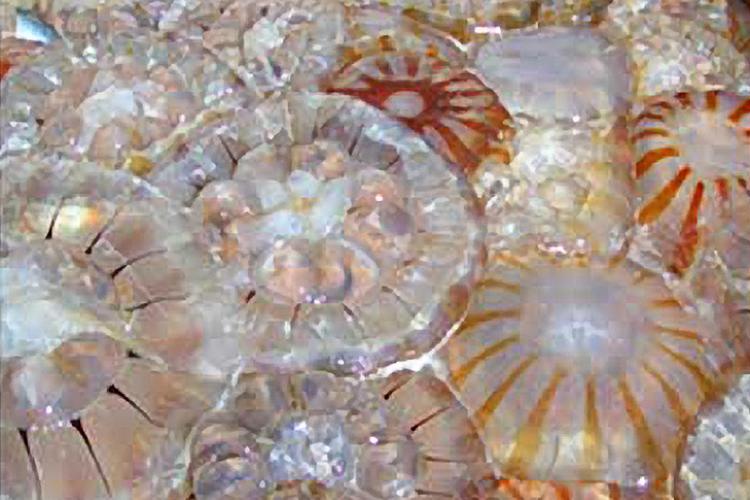 Jellyfish monitoring work has been incorporated into the fisheries oceanographic project BASIS (Bering Arctic Subarctic Integrated Surveys) in the eastern Bering Sea since 2004; the Chukchi Sea in 2007 and 2011-12; and in 2012 was expanded to the eastern Gulf of Alaska (GOA) after notable jellyfish catches during summer surveys.

The objectives of the jellyfish monitoring program are 1) to identify species composition, 2) to establish yearly relative abundance and biomass indices for those commonly encountered genus/species by area, and 3) to determine potential effects on target fish species as a result of jellyfish interactions.  These objectives were designed to be met through quantifying all jellyfish from BASIS net tows and conducting diet and digestion studies for the most dominant species.

The GOA project coordinates annual fisheries and oceanographic studies using a series of surface trawls, oceanographic instrumentation, and zooplankton net tows to investigate ecological conditions and juvenile forage fish in the eastern Gulf of Alaska.  It specifically targets commercially important young-of-the-year groundfish and juvenile salmonid species during July-August in federal waters up to 100 miles offshore from the south end of Baranof Island to Kayak Island, Alaska. After jellyfish were observed in notable numbers in the surface trawl catches, protocols were modified in 2011 to include detailing speciation, individual weights, and bell diameters.

The five most commonly occurring jellyfish in the GOA project in order of highest biomass are Chrysaora melanaster, Aequorea spp., Cyanea capillata,  Aurelia spp., and Staurophora mertensii. This is similar to the eastern Bering Sea project in terms of composition with both areas recording C. melanaster as the most dominant species in 2013.

The next phase of the jellyfish monitoring program included collection of individual specimens for digestion and diet work in fall 2014, use of a more complete identification guide for trawled jellyfish in winter 2014, and expansion of monitoring in the eastern Gulf of Alaska to include additional data collection from the Southeast Coastal Monitoring Project in 2015.