Please call the NOAA Fisheries Alaska statewide 24-hour stranding hotline at (877) 925-7773 if you see stranded, injured, entangled, or dead whales in the water or on the beaches in the Alaska region. 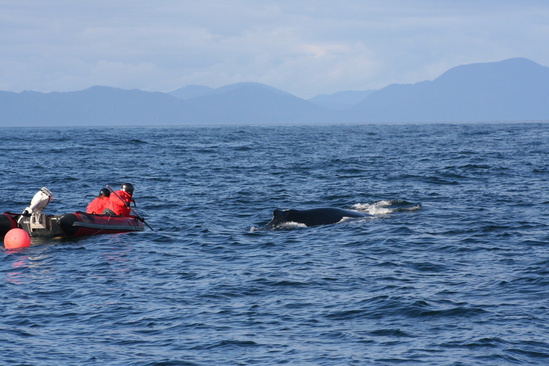 Stranding network biologists attempt to cut a line off a humpback whale.

NOAA Fisheries' Alaska Protected Resources Division, working with authorized and trained stranding network partners, attempts to safely free large whales from life-threatening entanglements, and, at the same time, help gather valuable information that may reduce the frequency and impact of entanglement in the future.

Please let us know if you see injured, entangled or dead marine mammals in the water or on the beach. Since 1998, NOAA Fisheries' Alaska Protected Resources Division has received more than 140 confirmed reports of entangled large whales. However, the number of animals entangled is certainly much greater since many entanglements go unreported. Scar analysis done on humpback whales in northern Southeast Alaska indicated that 78% (maximal estimate) of the population have scars indicating that the animal had recently been entangled (Neilson, 2007).

Entangled marine mammals may drown or starve due to being restricted by gear, suffer physical trauma and systemic infections, and/ or be hit by vessels due to an inability to avoid them. For Alaska's smaller marine mammals, like the seals and porpoises, death is typically immediate, and due to drowning. However, large whales, like the humpback whale, can typically pull gear, or parts of it, off the ocean floor, and are generally not in immediate risk of drowning. In addition, the impacts of entanglement may be non-lethal, as in the reduction of reproductive success.

Since the threat of entanglement to large whales is not typically immediate, there is time to cut the animal free. However, cutting free a 45-foot, 40-ton, typically free-swimming animal, is not an easy task, and can be quite dangerous for humans and the animal alike. To do so safely, rescuers use a boat-based procedure that is a modification of an old whaling technique called "kegging". Historically, 'kegging' involved attaching barrels or kegs to whales by harpooning them.

The extra drag and buoyancy of the kegs would tire the whale out and keep it at the surface. For disentanglement purposes, rescuers throw grapples or use hooks on the end of poles to attach to the gear already entangling the animal. Instead of barrels, rescuers use large buoys. Once approachable, rescuers safely assess the animal and entanglements, and using specially designed knives on the end of poles, attempt to free the animal of all entangling gear. 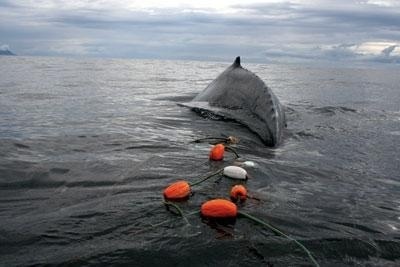 In addition to specially designed tools that help responders get hold of and cut free large entangled whales, NOAA Fisheries uses transmitters and receivers to automatically and remotely track an entangled animal over time. The science, called telemetry, is an important tool for whale rescue.

The Alaska Response Network uses telemetry to track and re-locate entangled whales that cannot be disentangled during the initial response due to limited resources (experience of personnel, proper equipment), and/or condition restraints (weather, sea state, time of day, remoteness of location), or terminated early when condition considerations or the behavior of the animal makes it dangerous for the rescue team to proceed. Telemetry increases the safety of disentanglement operations, and may assist in its overall success.

The Network uses a pair of transmitters—an Argos/ GPS-based and a VHF radio transmitter. Both transmitters complement each other and are placed together on a telemetry buoy that is specially designed to hold the tag(s) and be attached to the entangling gear trailing behind the animal. Telemetry buoys, like the disentanglement tools, are strategically placed throughout the state with trained personnel.

In August 2006, Network members tagged an entangled humpback in lower Stephens Passage in Southeast Alaska. The next day the Network was able to respond, re-locate the animal using the transmitters, and cut all wraps of gear from the animal. Unfortunately, lines remained embedded in wounds and thus remained attached to the animal. Over the next 9 days and at least 215 nautical miles, the animal was tracked as it swam southwest along Frederick Sound, south down Chatham Straits, and out to Coronation Island. However, on the 10th day the animal moved back into the sheltered waters of Chatham Strait and conditions allowed a rescue operation to be mounted in which the animal was entirely freed of all gear.

Entanglement response efforts are dependent on upon the commitment of many state and federal agencies (e.g. NOAA Fisheries Office of Law Enforcement, the U.S. Coast Guard, the Alaska Department of Fish and Game, the National Park Service), private non-governmental organizations (e.g. the whale researchers), fishermen, and other individuals working together—many as volunteers, in a community-based effort. Whale rescue is complex and dangerous for the whale rescuers as well as the animal. Network response to entangled whales may only be attempted by authorized persons who are experienced, trained, knowledgeable, and have proper support and equipment, working under NOAA Fisheries' permit.

The Alaska network responding to entangled whales has grown since its inception in 1998, and now comprises over 180 participants who have received different levels of training in order to support disentanglement efforts statewide. The network now has nine caches of specialized equipment strategically distributed throughout the state. Since 1998, the network has received more than 140 large whale entanglement reports and mounted more than 85 on-water responses (some reports could not be responded to due to time-of-day, weather, and/or remoteness). These responses totally or partially freed more than 45 large whales from life-threatening entanglements. Fishermen are trying to reduce the rate and impact of large whale entanglement in their gear, and assist in disentanglement efforts when appropriate. (NOTE: These are draft numbers and are subject to change.)

While disentanglement may help save some of these animals, it is not the long-term answer. The value of entanglement response is that it provides information that might help managers, fishermen and other ocean users with the ultimate goal of lowering the risk of entanglement for large whales and other marine animals.

How to Report Marine Mammal Strandings and Entanglement