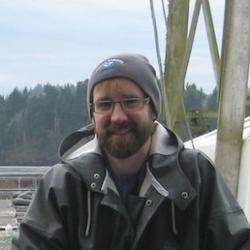 Adam Luckenbach is a fish physiologist that began working at the Center in October 2009. He grew up in North Carolina and received his Ph.D. in Zoology and Biotechnology from North Carolina State University.  He and his wife moved to Seattle in 2005 where he conducted his postdoctoral work at the University of Washington, School of Aquatic and Fishery Sciences. Adam's areas of expertise include reproductive and growth physiology and sexual differentiation in fishes. His doctoral research focused on environmental sex determination in southern flounder, which exhibit a unique form of sex determination where both genetic and environmental factors, such as water temperature, can influence genes expressed in the gonads (e.g., aromatase or cyp19a1a mRNA levels) and ultimately affect phenotypic sex. In addition to its intrigue from a basic perspective, this work has applications to fisheries management and aquaculture. More recently, Adam has conducted studies in collaboration with Penny Swanson of the NWFSC focusing on mechanisms regulating early ovarian development in coho salmon. Based on its semelparous life history, the coho salmon is an ideal model for studies of ovarian gene expression and regulation of ovarian follicle development because all the ovarian follicles within the ovary are homogeneous in stage compared to most fishes. His work in this area has led to the identification of numerous ovarian genes that are regulated by follicle-stimulating hormone (FSH) that are likely involved in differentiation and remodeling of the ovarian follicle structure during onset of puberty.

Adam currently has several projects focusing on sex differentiation, sex control, and reproduction in sablefish (also known as black cod), a high-value groundfish species native to the Pacific Northwest. The overarching goals of these projects are to gain an understanding of the mechanisms that regulate gonadal differentiation and development, and to develop novel approaches for sex control in sablefish (e.g., induction of sterility or monosex production). Production of reproductively sterile sablefish through non-transgenic approaches would mitigate escapement risks for cultured sablefish while also likely improving production and profits to fish farmers. Projects are currently underway to (1) histologically characterize the differentiation of sablefish gonads into ovaries or testes and determine the timing of this event; (2) sequence and assemble the transcriptome (i.e., the expressed genes) of differentiating ovaries and testes; (3) assess effects of hormones on gonadal differentiation to determine the sensitive period of gonadal differentiation when sex can be controlled; and (4) develop broodstocks for improved reproductive performance of captive sablefish. Dr. William Fairgrieve of the Marine Fish Biology Program and Penny Swanson of the Environmental Physiology Program are collaborators on a number of these projects.