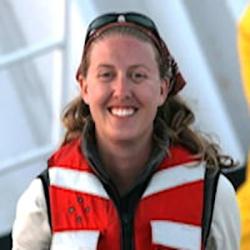 Allison Henry is part of NEFSC/PSB’s Large Whale Team. She is a member of the right whale aerial survey team and spends much of her time in a NOAA Twin Otter aircraft searching for, and documenting, this critically endangered species. Photo-identification of individual right whales is a key component to learning and understanding their distribution, population, health, and demographics. Allison is in charge of processing the photographs collected in the field and identifying the unique individuals. She also evaluates all reported large whale injury and stranding events to determine the annual rates of serious injury and mortality due to human interaction for the stock assessment reports.

Allison earned her B.A. in Biology from St. Mary’s College of Maryland in 1997. She then worked for a non-profit cetacean research organization based out of Gloucester, MA until 2003. Her time there was spent educating the public from various whale watch vessels; collecting behavioral and photo-identification data on the resident humpback population; managing the photo-ID humpback catalog and database; and hiring and overseeing interns.

She then switched her focus to right whales - participating in seasonal aerial surveys in the southeastern US calving grounds for 3 winters. Interspersed between her projects down south, she participated in NEFSC research cruises and aerial surveys. Allison also spent one year (2006) working as a data editor for the Northeast Fisheries Observer Program (NEFOP) where she gained invaluable insight as to what fishing in New England really entails.

In 2007, Allison became a contract marine mammal observer for NEFSC. Her main role was right whale aerial survey observer, but she also participated in a variety of research cruises and surveys. She became a Federal Research Fishery Biologist in 2011.