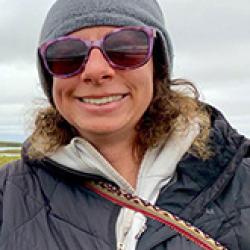 Corey loved the ocean and all of its critters starting from a young age and has pursued job opportunities that allow her to work on, over, and near the salty seas. She began working with marine mammals and photo identification during college and has been lucky to continue in this, and other fields, since that time. This path has also allowed her to work with a variety of species while participating in field projects from the Arctic Ocean to the Antarctic Peninsula and with many others taking place on both coasts of the contiguous United States.

Corey’s first job as an aerial observer focused on surveys for critically endangered North Atlantic right whales in the southeastern United States’ offshore waters. Since then she has flown on many different platforms working with a variety of organizations. She joined the Aerial Surveys for Arctic Marine Mammals (ASAMM) team in 2011 as an observer and has enjoyed seasonally participating in this project every year since.