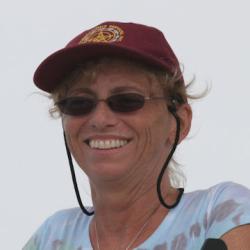 Debi is a Research Fishery Biologist in the Protected Species Branch at the Northeast Fisheries Science Center in Woods Hole, MA.  In this job she assesses the status of stocks (estimate abundance and bycatch) for a variety of marine mammal stocks in the US North Atlantic, provides take reduction advice, and studies the habitat of marine mammals.  She is involved with designing, conducting, and analyzing shipboard and aerial line-transect surveys which are needed to estimate the abundance of marine mammals and to model the marine mammals’ habitat, like what is being done in the AMAPPS project.  Another major part of her job is working with scientists from around the world in the Scientific Committee of the International Whaling Commission.  She was vice-chair and chair of the Scientific Committee during 2005-2011.  Now she’s head of the US delegation to the Scientific Committee and chair of the In-depth Assessment sub-committee.

Debi received a Bachelors of Science in 1981 majoring in biology and minoring in math from the University of Illinois, Champaign-Urbana. Then she when on to participate in field work studying the behavior of fiddler crabs in North Carolina and damsel fish in Jamaica. She then went back to school to get a Master’s in bio-statistics from the University of North Carolina in 1986 and a PhD in Biological Oceanography from Scripps Institution of Oceanography in 1993. Her PhD thesis involved developing the line transect method used to estimate abundance of cetaceans and applied this to dolphins in the Eastern Tropical Pacific and harbor porpoises in the Gulf of Maine.