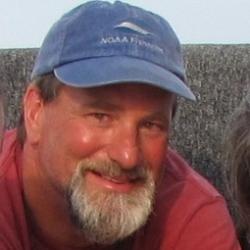 Henry Milliken leads the Northeast Fisheries Science Center's conservation engineering efforts to reduce the bycatch of sea turtles, cetacean and other protected species in commercial fishing gear. He has directed and attained funding for many successful collaborative research efforts.

Henry emphasizes listening to and working with the fishing industry to facilitate the testing of industry supported ideas on industry vessels. Henry's primary responsibility lies in the integration of the various components of gear research to facilitate their successful completion. These activities include the development of the study's methodology, facilitation of the contracts to collect the data, attaining the necessary permits to be allowed to sample the finfish and protected species, ensuring the deliverables (data collection, reports, and vessel time) are provided on time, and organizing the review of the final report to make certain that the report adequately describes the research that was conducted.

Henry grew up fishing and worked on or near the water during his youth. Henry earned his B.A. in Zoology/Physiological Psychiatry from Connecticut College and, following college, was selected to the Marine Fisheries Program of the US Peace Corps. He was stationed on the Island of Panay in the Philippines where he worked with artisanal fishermen. After completing his volunteer service, he was hired as the Technical Trainer for the Marine Fisheries Program of the Peace Corps. When Henry returned stateside, he spent time as an NMFS Observer on a fishing vessel in the Gulf of Alaska and then was hired by the University of Rhode Island's Fisheries Center. While working for URI, he attained his M.S. in Fisheries, learned about commercial fishing gear, and conducted applied research for the Rhode Island Sea Grant program. Following URI, Henry worked for the Massachusetts Division of Marine Fisheries Conservation Engineering group and continued to study gear solutions to mitigate bycatch. In addition he worked on the assessment of fishing mortality both through applied research and as a member of ICES Fishing Technology Fish Behaviour Working Group (WGFTFT). During his time at MDMF he also assisted the NMFS Survey group with the evaluation of their fishing gear. NMFS Survey group hired Henry in 1999 and after some time, he sought a position doing gear work to mitigate protected species bycatch for the Protected Species Branch, where is presently situated.