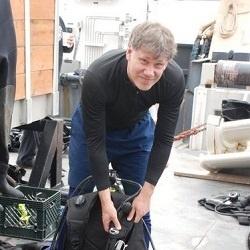 John graduated with a B.S. degree in Oceanography from Humboldt State University in Arcata, California in 1993, and subsequently worked for several years with the U.S. Fish and Wildlife Service on various seabird and marine mammal projects around Alaska. He started with NOAA at the Alaska Fisheries Science Center (Auke Bay) in 1998 as part of the Bering Arctic Subarctic Integrated Survey group (BASIS). In 2007 he left BASIS to pursue his own interests in science journalism and from 2007-2009 worked independently as a freelance journalist covering marine science issues. He returned to NOAA via the Northwest Fisheries Science Center in 2009 as a member of the Fisheries Engineering and Acoustic Technologies team (FEAT).

John's work and research interests within FEAT are generally focused on improving our understanding of how regional oceanography influences the distribution of pelagic animals (like Pacific hake, krill, and rockfish), within the California Current Large Marine Ecosystem. His current work centers on integrating FEAT's fisheries acoustics data, gathered by ships and saildrones, with concomitant collections of oceanographic data. Future work will involve tailoring machine learning and pattern recognition systems to mine these data for information on important fisheries. He serves as a sea-going scientist for the Center's Integrated Acoustic Trawl Survey for Pacific hake, as well as a divisional science and working diver.