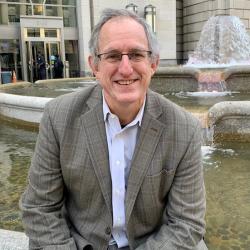 Jon Hare is the acting Director of Scientific Programs and Chief Science Advisor. In this role, he leads NOAA Fisheries' efforts to provide the science needed to support sustainable fisheries and ecosystems and to continue our nation's progress in ending overfishing, rebuilding fish populations, saving critical species, supporting sustainable aquaculture, and preserving vital habitats. As acting Director, Jon supervises the planning, development, and management of a multidisciplinary scientific enterprise of basic and applied research. He oversees NOAA's six regional science centers, including 24 labs and field stations, and the Office of Science and Technology.

Since 2016, Jon has served as Director of the Northeast Fisheries Science Center. His research has focused on fisheries oceanography: understanding the interactions between the ocean environment and fisheries populations with an aim of contributing to fisheries assessment and management. Jon’s research also examines the effect of climate change on fish and invertebrate population dynamics. This work involves coupling the output of global climate models with population models to simulate the effects of climate change on population dynamics. Recently, he has been working to support offshore wind energy development, while protecting and conserving wildlife and promoting sustainable fisheries. He is also interested in developing collaborative scientific and management frameworks to address complex environmental issues.

Jon earned a B.A. in Biology from Wesleyan University and a Ph.D. in Oceanography from SUNY Stony Brook. He received a National Research Council Research Associate in 1994 to work at the NOAA Beaufort Laboratory and was hired by NOAA in 1997. Jon moved to the NOAA Narragansett Laboratory in 2005, was appointed Oceanography Branch Chief in 2008 and Lab Director in 2012, before becoming Director at the Northeast Fisheries Science Center