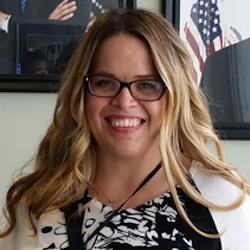 Dr. Katie Siegfried earned her B.S. in Biology from the University of New Mexico, Albuquerque in 2002, and earned her Ph.D. in Environmental Studies from the University of California, Santa Cruz in 2006. She joined the shark assessment team in Panama City, FL in 2006, and worked as an assessment scientist on species managed by both NOAA Highly Migratory Species and the International Commission for the Conservation of Atlantic Tunas. She moved to Beaufort in 2011 to work with the Sustainable Fisheries Branch on snapper and grouper species managed by both the South Atlantic Fishery Management Council and the Atlantic States Marine Fisheries Commission. Katie has been the technical lead for highly controversial species, and possesses extensive experience delivering and interpreting scientific products to both technical reviewers and stakeholders. She is excited to begin work with the Gulf and Caribbean Species program in Miami in her new capacity.