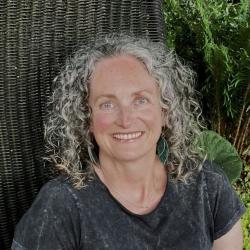 Kim received her Ph.D. from the University of Aberdeen (UK) in Zoology and holds a B.Sc in Biology from the University of Victoria (Canada). As a post-graduate student, Kim developed and applied molecular genetic tools to enhance studies of the behavioral & molecular ecology of bottlenose dolphins in the North Atlantic. Following her Ph.D., Kim returned to the Pacific Northwest and joined the Northwest Fisheries Science Center (NWFSC) as a National Research Council post-doctoral fellow from 2003-2005 examining temporal dynamics of the social structure of the endangered Southern Resident killer whales. Kim is a research geneticist at NWFSC and works in close affiliation with the Alaska Fisheries Science Center using genetic and genomic approaches to support the conservation and management of cetacean populations in the eastern North Pacific.