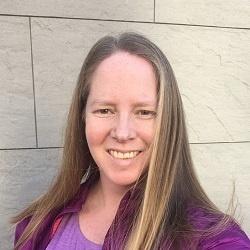 Kinsey Frick joined NWFSC in 2003 as a Research Fisheries Biologist. Kinsey holds Honors B.A.s in Biology and International Studies from Oregon State University. She earned an M.S. in Zoology from the University of New Hampshire for studies on nudibranch predator-prey relationships in the Gulf of Maine. Kinsey's background also includes years of working at community pools, pathology lab tech at a small Oregon seed company, and SCUBA diving credentials starting in 1994 as a teenager. As part of the Migrational Behavior program, she has managed databases for salmon radiotelemetry studies to assess impediments to migration, and participated in underwater evaluation of groundfish populations in the San Juan Islands.