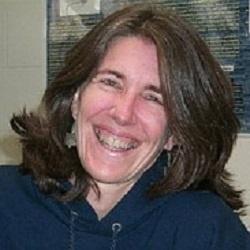 Kym Jacobson started working at the NWFSC as an NRC postdoctoral research associate with the Environmental Conservation Division. She joined FE's Estuarine and Ocean Ecology Program at its inception in 1997, and is based at NWFSC's Newport field station. Before joining NWFSC, Kym held postdoctoral positions at the Mayo Clinic in Rochester, NY, and the Seattle Biomedical Research Institute. Her research interests have focused on host-parasite relationships, which she began studying as an undergraduate. Her research has included studies of populations and community ecology, parasite immunobiology and molecularimmunology of malaria infections. Kym received a B.A. in French and a B.S. in zoology from the University of Nevada, Reno. She received an M.S. and Ph.D. (in zoology) from Wake Forest University.

Kym's current research focuses on the ecology of host-parasite interactions of anadromous and marine fishes. Her studies currently focus on parasites of juvenile salmon as they make the transition from freshwater to estuarine and marine habitats. She is striving to gain a better understanding of environmental factors that affect salmon-parasite relationships and the potential effects of parasites on growth and survival of salmon populations. Kym is also studying parasites obtained through trophic interactions to better understand juvenile salmon feeding habits, migration and habitat use during their first months of ocean residence.