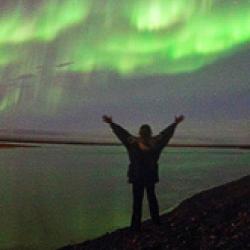 Lisa lives on an island in Washington State and has a degree in biology with a minor in wildlife management from the University of Nevada.  As a child, she was inspired by Jacques Cousteau and Marlon Perkins to spend her life outdoors and live in a tent, much to her mother’s dismay. Over 30 years ago she started working wildlife research and conservation projects studying population dynamics, sociobiology and behavior, using photo-identification techniques for various species, both terrestrial and marine-based. Some of her work brought her to the San Juan Islands in Washington State studying the southern resident community of killer whales, South Africa to study southern right whales and great white sharks, southeast United States to work with the critically endangered North Atlantic right whale, to the north slope of Alaska to survey the Arctic ocean for bowhead whales from the air, and Antarctica working as an expedition guide.

A free spirit at heart, when not working a research project or guiding, you will probably find Lisa horning in on a friend’s travel plans to a far-flung location at the last minute. Never one to turn down a road trip no matter how far or long that may be or to where, or camping out in a beautiful or remote location, she’ll often be found staring up at the stars, camera in hand, living in that well-loved tent.