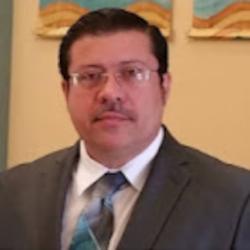 Dr. Noguerol is the Information System Security Officer for the Southeast Fisheries Science Center. In this role he is the responsible for the cybersecurity operation. In 2012, Dr. Noguerol was one of the Gold medal winners in the worldwide Hacker Halted competition after hacking a Windows Server 2012 in 33 minutes, in a real-life event.

In 2016, Dr. Noguerol was selected as the C|CISO of the year worldwide, by the EC-Council Foundation and InfoSec Institute, among 2443 prospective experts from 131 countries. The same year, Dr. Noguerol was invited as a speaker to the FISSEA Conference at the National Institute of Standards and Technology (NIST), making him the very first Hispanic to have had this honor. In 2017, he was selected as one of the Top 10 Technical Instructors in the world by New Horizons, Inc.

As of March 2, 2021, Dr. Noguerol is a holder of 101 Information Technologies and Cybersecurity Certifications.

In recent years, he has been a featured speaker at Information Technology/Information Security Symposiums throughout North America, Europe, Central America, South America, and on multiple television and radio shows.

Dr. Noguerol's scientific work has been acknowledged by the American Institute of Physics for his contribution to probe a fault in the Snell's Law. He has also been recognized for developing and proposing a brand new mathematical model that combines the logic of Elliptic Curve and Lagrange's theorem with a PIN Block encryption scheme to minimize risks associated with electronic data leakage when using Multimedia Messaging Services (MMS). Notably, this was the first time that both mathematical theories (specifically) were combined and the result speaks for itself. The solution proposed by Dr. Noguerol in 2001 has been considered by several world-renowned companies such as WhatsApp and the largest financial institutions worldwide, such as the Bank of China.

Dr. Noguerol was ranked number 17 by Business Leaders Magazine in 2012 as one of the most influential IT leaders in the USA East Region. He is the author of multiple cybersecurity publications, and is one of the co-authors and reviewers of the worldwide acclaimed book, "Intrusion Detection Guide."

He is also the author of the first book that focuses specifically on Cybersecurity Leadership. The title of his second book is "Leadership In Cybersecurity; Sweet Talkers' Effect" and is available on multiple digital platforms, such as Amazon.