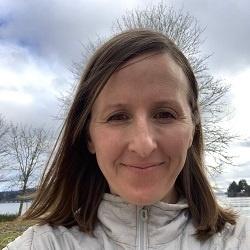 Megan joined NWFSC in 2006, and has worked at the Manchester Research Station in the Environmental and Fisheries Research division since that time. Megan's fisheries career began at the USGS Columbia River Research Laboratory, researching various topics, including the effects of beta-glucans on hatchery salmon immunity and the benefits of salmon carcasses to stream ecosystems. Megan then moved on to study marine fish behavior both in the lab and in Yaquina Bay in Newport OR, home to the Hatfield Marine Science Center and Oregon State University, where she earned a Master's degree in Fisheries Science.

Megan also uses acoustic telemetry to characterize the behavior of steelhead smolts at the Hood Canal Bridge, which sits on concrete pontoons that extend 15 feet under the surface of the water and block surface-migrating salmonids. Her analyses estimate that only about 50% of the steelhead smolts survive past the bridge, and that currents disrupted by the bridge lead to substantial changes in migration behavior, leaving smolts vulnerable to predation. Future efforts will focus on identifying and testing solutions to improve fish passage and decrease bridge mortality.