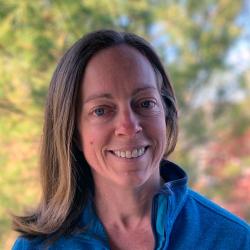 Nicole Cabana is the Deputy Director at the Northeast Fisheries Science Center (NEFSC) in Woods Hole, MA. She has been at the NEFSC since 2018, when she reported as a NOAA Corps Officer in the Chief of Staff role. In 2020 she retired from the NOAA Corps and stepped into a civilian role as the NEFSC Deputy Director. She has an undergraduate degree in Marine Biology, a Masters degree in Engineering, and certificates in Geographic Information Systems and Project Management. She is also a dual rated pilot, certified to fly both fixed and rotary wing aircraft (and seaplanes). During her 20 years of service in the NOAA Corps Nicole served in a broad range of operational, staff, and leadership positions. She operated NOAA Ships in both the Atlantic and Pacific, served as a divemaster, and flew NOAA aircraft on a variety of scientific missions spanning from the equator to the arctic. As Acting Director she oversees the five labs, 400+ staff, and scientific research to support productive, sustainable, and healthy marine ecosystems and coastal communities in our region.  With a focus on organizational health and people, she aspires to make the NEFSC the best place to work in NOAA!