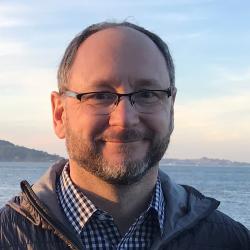 Pat began working for the Alaska Fisheries Science Center in 2001. He started at Auke Bay Laboratories (ABL) with the Marine Ecology and Stock Assessment (MESA) program, transferred to the Marine Salmon Investigations (MSI) program in 2004 (to live and work remote at the Little Port Walter Research Station), and returned to MESA in 2008. Over the years, Pat has worked on a broad range of marine ecology research, including groundfish stock assessment, benthic habitat, effects of fishing, hatchery/wild genetic interactions, and barotrauma. In his current position as a Supervisory Marine Biologist, Pat manages the AFSC’s annual longline survey. In leading this fishery-independent stock assessment survey, Pat oversees all scientific and operational matters. The survey was originally designed to provide an abundance index for sablefish (black cod) but is now used to provide abundance information for other species too, including Pacific cod, rockfish, sharks, and grenadiers in the Gulf of Alaska, Aleutian Islands, and Bering Sea. Pat also serves as the ABL Unit Diving Supervisor. Pat has a B.S. from the University of Minnesota in Fish and Wildlife and a M.S. in Fisheries from the University of Alaska Fairbanks.