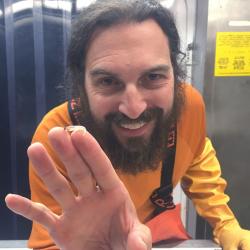 Patrick came to NOAA Fisheries in 2002 after taking a Ph.D. in Oceanography at Texas A&M University and working as a National Research Council postdoc at the Hatfield Marine Science Center.  He worked from 2002-2006 at the Northwest Fisheries Science Center doing acoustic-trawl surveys and research on west coast groundfish (Pacific hake, Merluccius productus, widow rockfish, Sebastes entomelas) and zooplankton (krill, Euphausia pacifica and Thysanoessa spinifera).  Patrick moved to Seattle and the Alaska Fisheries Science Center in 2006, and became involved with surveys of walleye pollock (Gadus chalcogrammus) and krill (Thysanoessa spp.) in the Gulf of Alaska and eastern Bering Sea conducted by the Midwater Assessment and Conservation Engineering (MACE) program.  In 2014 he began to oversee the work of other scientists on many topics as a supervisor in the MACE program and has served as acting program manager.  Patrick’s research interests include applying acoustic, optical, and trawl survey methods at sea to the study of zooplankton and fish scattering properties, abundance, and distribution, developing acoustic indicators for use in fisheries management and stock assessment, understanding how physical oceanographic features influence the distribution of zooplankton, fish, and other higher predators, and conducting ecological research focused upon understanding how marine ecosystems respond to climate change.  He has often worked in and/or led interdisciplinary groups to propose, conduct, and communicate results of research on these topics.