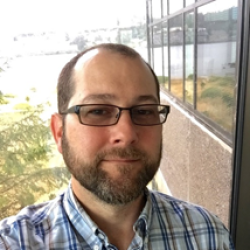 Hailing from Sacramento, CA, Ryan moved to the Pacific Northwest, where he received his BS in Zoology (Chemistry minor) from Oregon State University in 2000. After graduating, he spent 3 seasons as an observer out of Dutch Harbor, AK, before taking a break from observing to spend a year at a remote salmon hatchery on Esther Island in Prince William Sound. He then returned to observing, completing a contract on a mothership for the At-Sea Hake Observer Program, followed by 5 years as a lead observer for the West Coast Groundfish Observer Program  in Coos Bay, OR. In 2008, Ryan accepted a debriefer position with the WCGOP in Seattle, WA, before relocating to Astoria, OR. Most recently, he served as Lead Debriefer for the WCGOP, stationed at the Hatfield Marine Science Center in Newport, OR. In addition to his role as Lead Debriefer, Ryan is a certified marine safety instructor. He was also a member of his Division’s Management Team, the NWFSC Workplace Engagement and Collaboration Team (WECT), the National Seabird Program, and NOAA’s Bycatch Reduction Engineering Program (BREP). Ryan joined the NEFSC in November of 2020 as the Fishery Monitoring and Research Division's (FMRD) Training and Data Quality (TDQ) Branch Chief.